According to ESRB, this game contains: Animated Blood, Crude Humor, Language, Sexual Themes, Use of Alcohol and Tobacco, Violence 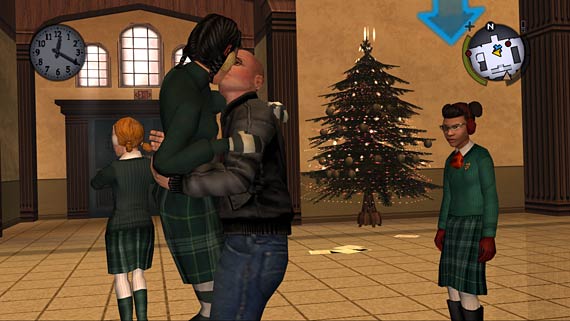 Parents should be wary of allowing anyone but older teenagers to play this game. I was surprised that Bully got as low a rating as it did. As the above content indicators suggest, there is plenty of mature content to be found. The game's protagonist regularly engages in violent and antisocial behavior, and some of the missions, such as one in which players take voyeuristic photos of a scantily clad classmate and steal panties from the girls' dormitory and give them to a porn-obsessed teacher, have a seedy quality. This game is probably inappropriate for all but the oldest teens.

Grand Theft Auto fans will immediately recognize the similarities between Bully and Rockstar's other titles. Indeed, it would not be entirely inaccurate to describe Bully as essentially GTA set within a high school. Players expecting a comparable experience to GTA will probably be a little disappointed, but there are enough similarities that these players will probably find it worthwhile.

Deaf and Hard of Hearing gamers will likely experience some frustration while playing Bully. There is an option to turn on subtitles, but they only appear during cut-scenes. While this setup may make it possible to follow the core narrative, it leaves out all the random NPC dialogue as well as the dialogue from the short verbal exchanges that players can initiate with said NPCs. Fortunately, the game supplies enough information via onscreen indicators to make it possible to complete the missions. It's just unfortunate that the subtitling doesn't include anything but the absolute bare essentials.