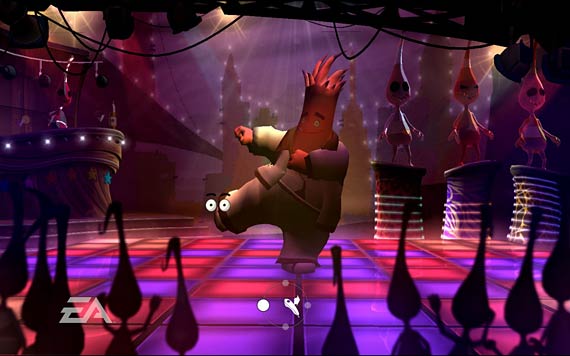 After years of playing second fiddle, music-based gaming finally reached the forefront with the release of 2005’s Guitar Hero, a game that expertly mixed accessible controls with high-quality licensed rock music (as opposed to the forgettable techno/electronic tunes of Dance Dance Revolution and its ilk). Now comes Boogie, a game that combines well-known licensed dance hits and hip-hop music—from The Jackson Five to Britney Spears—with onscreen dancing and karaoke gameplay. The result is a strange and misguided attempt to do for singing and dancing what Guitar Hero did for guitar playing.

In Boogie, players pick from one of five distinct characters and make them dance to the tune of roughly 40 different pop/dance tracks. Dancing is achieved by swinging the Wii remote in time with the music, an action that feels akin to waving a maraca or banging an imaginary drum. Players also have the option of singing each track karaoke-style using the included USB microphone. Add to that the ability to compete with friends in multiplayer mode and it might seem that Boogie has the makings of an outstanding party game. Sadly, these ideas ultimately fall far short in their execution.

Though entertaining at first, the dancing quickly grows frustrating once it becomes evident that the game doesn’t consistently recognize the controller movement. Earning a high score requires the player to flick the remote either up/down or left/right in specific sequences; however, since the game often fails to immediately detect these changes in direction, dance combos can get broken through no fault of the player. To make things worse, the game’s choice of where the beat falls on some of the songs feels off. It’s tough to have fun when the player and the game disagree on where the beat is. 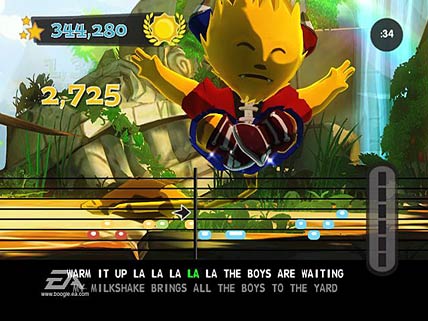 While the dancing at least provides some short-lived enjoyment, the karaoke falls flat right from the get go. The microphone does a poor job of picking up sound, and when it does, it can only detect the timing and pitch of the player’s voice, not the actual words. In addition, the vocals are sometimes significantly out of sync with the onscreen voice prompter, making it necessary for the player to sing out of time with the preprogrammed voice track. It’s rather tricky trying to sing the words of a song consistently a half beat late on purpose—an interesting challenge, but not what I would call fun.

Boogie’s story mode treats players to one of the most ill-conceived attempts yet to forcibly inject a story into a videogame. An incoherent mess involving evil aliens, it is conveyed via static comic-book style frames accompanied by hard-to-read text and gratingly dissonant sound effects. These brief segments truly represent some of the worst storytelling ever to grace a videogame, both in terms of content and delivery. The story mode isn’t merely bad; rather, it is physically repellent to the point where even a few minutes seemed hardly worth enduring, regardless of the game’s quality.

The concept of a game that joins dancing and karaoke sounds intriguing on paper, and if Boogie had managed to capitalize on its strange mix of gameplay ideas it might have been pretty enjoyable in practice. While a decently functioning karaoke setup would have helped, the ultimate failure of Boogie lies with its dancing. Even had the developers worked out all the kinks, however, I’m not convinced that they picked the best interface. Perhaps the upcoming Wii Balance Board would be a better fit. I believe there’s a good game to be made using these concepts, but Boogie sure as heck isn’t it. Rating: 2.5 out of 10

Disclaimer: This game is based on the Wii version of the game.

I enjoyed reading your review. Thanks for writing about Boogie. I was actually considering buying this game. Since I love karaoke, however I didn’t realize you had to dance to it too! That’s not how I’ve seen the game advertised. I’ve only seen it advertised as a karaoke game that’s why I wanted it.
But after reading your review this does not sound like a game I would enjoy. I’m glad that I didn’t buy it. Thanks for the review!

I just played this and was similarly underwhelmed, but I agree with Epic Juicebox’s additional comments that suggest going a little easy on EA for trying something that is very hard to get right (speaking as someone who has worked on developing rhythm-action for Wii; playing this game brought back bad memories). And he’s also right to point out that no one has yet nailed phenome-detection in karaoke games (let’s see how Rock Band does). That said, I was bored before I even began with Boogie, and it is certainly not as good as other karaoke games on the market… Read more »

Great review! For the most part, I had a lot of the same thoughts when I first played through Boogie – before having read any reviews, I picked this one up on a whim – but after spending some time mastering the game’s finnicky controls, I have to say I find it at least deserving of an extra point and a half! *grin* Here’s why… First, the dancing. Yeah, it’s tough to get the hang of, but once you realize the game is really only asking you to serve as a human metronome, you can really start racking up points.… Read more »