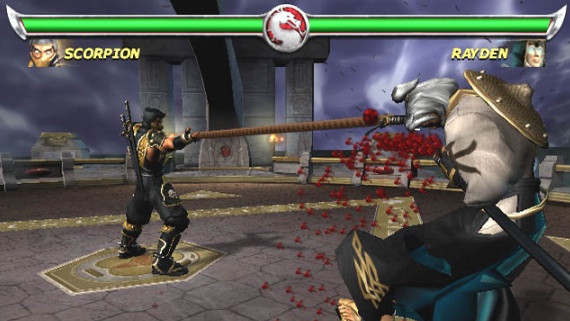 It seems that as long as there are videogames there will be scientific studies trying to prove how harmful they are. The credibility of these studies varies widely, ranging from rigorous and well thought out to flawed and utterly misleading. An article in the upcoming May issue of the Journal of Experimental and Social Psychology entitled "The effect of the amount of blood in a violent video game on aggression, hostility, and arousal" lies a little closer to the dubious end of the spectrum.

In the study, researchers took students from a college psychology class and had them play Mortal Kombat: Deadly Alliance on one of four randomly-assigned blood levels (maximum, medium, low, or off). The students' physiological arousal was tracked via heart rate, and aggression was measured as a function of time spent using the character's weapon (more on this later). Afterwards, the players filled out a hostility questionnaire. So what happened? According to the authors:

"[T]he blood present conditions had a significant increase in arousal and hostility, while those in the blood absent condition did not have such an increase…. [and] those who saw more blood in the violent video game had an increase in state aggression, which was quantified by the ratio of weapon time to total time."

This would be pretty damning were it not for the questionable way in which the researchers measured aggression. From the article: "…participants were told that the use of the weapon causes more damage. If they decided to use the weapon more, that suggests that they want to cause more damage…." Based on this, the authors conclude that more weapon usage=more aggression. Unfortunately, this fails to consider that higher blood spray also amounts to more cool stuff happening on screen, violent or not. And since blood makes it easier to tell what moves are most effective, it makes sense that more blood would lead to more weapon use.

Overall, the authors' theory that higher blood levels will lead to higher aggression feels far too linear and simplistic. What they don't seem to understand is that it's not so much what is contained in a game but how it's presented that matters. Trying to quantify a game's blood content and correlate that to aggression strikes me as a tad ridiculous. Movies illustrate this all the time. The film Sweeney Todd, for example, is far bloodier than, say, Terminator 2, but I doubt it makes the viewer any more aggressive.

As a final note, I'd like to mention that by choosing Mortal Kombat: Deadly Alliance these scientists have done a great job of sticking to the hallowed videogame-research tradition of using only mediocre games that are at least five years old. Even if they say they picked it specifically because of the ability to change the blood level, it's still a characteristically lame choice. So kudos to them. Their reliance on intro psych students is also similarly clichéd for studies of this kind, so extra points awarded here for thinking inside the box.

The article makes for an interesting read, and provides an informative look into the somewhat flawed nature of much of the research on videogames and aggression.

What surprised me is that participants in the low and off blood condition did not reported any increase in aggression, despite the aggressive nature of the video game. This makes me think that the measures taken by Barlett et al. were confounded between aggression priming and violence perception.

I have a statistical question: is it considered bad research if your sample size is small and you’re doing some data transformation to get some significant results?