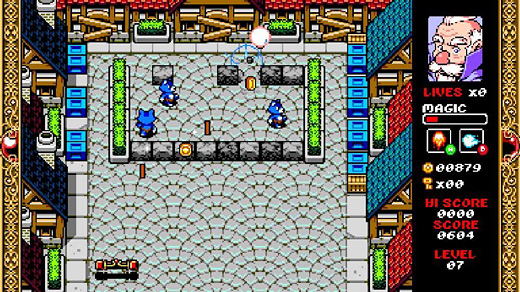 HIGH Every drop of programming love on-display here had me constantly contented.

LOW The impenetrable Stage 4-5 had me frazzled for a couple of days.

WTF Why isn't this a proper XBLA title?!

I never imagined I'd play a game that combined Breakout with The Legend of Zelda. I never knew I'd need a repurposed Arkanoid that substitutes fantasy/RPG elements for science fiction, yet come to me it did… and I absolutely love it. Laugh not, ye hardiest of hardcore, because I don't care who hears me say it: Wizorb

is a perfect game. Tribute Games has gone and done something truly magical with this, their first offering. Wizorb has taken the classic formula of a three-decades-old game (!) and spruced it up to a blinding sheen.

Those unfamiliar with the formula of Breakout and its svelte sister-cousin Arkanoid need only know that the game's concept is frighteningly simple: launched balls ricochet off the player's paddle around a playing field in an effort to destroy stationary bricks; cleared bricks mean a cleared stage. Yes, this game has its roots in the simplest mechanics. Wizorb's achievement, however, is the way in which it revisits this simple premise armed with years of gaming litany and transforms it into something fresh, beautiful, and challenging.

When a game this lovingly crafted comes along, it's just impossible for a gamer like me, who's steeped in years of the hobby, to resist. I took one look at the spot-on 8-bit graphics and was immediately drawn in. Beyond that, though, Tribute has filled the game with fantastic animation touches, as well as delightfully and appropriately retro sounds and music.

The beefed-up gameplay is equally superb. Players, as the wizard Cyrus, are armed with four magic spells that pull from a Magic Bar to help them along in their quest. These spells can be used at any time (provided the player has enough magic), and they add some great wrinkles to the formula. While these spells seem first to be fun and optional, near the game's halfway point they become nail-bitingly strategic scalpels that must be implemented as expertly as possible to continue. There are also item shops, hidden rooms, and secret levels to explore. Oh, and did I mention there are boss fights?! Yes, there are boss fights. Some of them I do wish were a little more challenging, but they were still a wonderful way to cap off each section of the game.

While Wizorb gets difficult towards the end, sometimes even frustratingly so, it never stops expanding on its formula. Enemies change with each section, and new obstacles and brick types pop up along the way to keep the player constantly working to stay ahead of their ball. While there can sometimes be a lot of luck in completing the later stages, getting through the game on the Hard Mode is really only done with clear plans for tactical destruction and some really good reflexes. Further, while the game can be merciless, it never feels impossible. Each time I restarted a world, I got a better understanding of each level. While some might argue that I'm merely responding to my OCD impulses, I'll tell you that I was responding to a great challenge, and figuring it out each step of the way. Yes, there's luck involved, but one really has to work at it, as well. That's just my kind of game.

I really struggled to find things to pick at that might tarnish this glowing review, and alas, I couldn't find any. If a game review is based on a game's merits as it fits into the long list of game titles, Wizorb does everything right. It revisits an old formula with a keen eye for the things that our elders did so well, while filling it with delicious details that add to the experience and augment it in so many ways. Let's also not forget judging the game on its "crack" factor—the most direct way to realize and encapsulate one's feelings about a game: this one had me absolutely hooked for the few days I spent with it. I didn't want to play anything else. The only odd thing about the game to me is the fact that it is not a "full-fledged" Xbox Live Arcade game that's more available to the masses.

Tribute Games has truly lived up to their name with Wizorb

, but they've gone above and beyond just doing simply that. They made a game that not only speaks to the Old School but has made it more accessible and exciting, as well. Kudos! Rating: 10 out of 10.


Disclosures: This game was obtained via retail and reviewed on the Xbox 360. Approximately 15 hours of play was devoted to single-player modes (completed one time).

Parents: This game has not been rated by the ESRB, but that's not a bad thing. There is violence in this game, but only ball-colliding-with-cartoon-characters-type violence. Enemies either fall over and disappear or simply evaporate harmlessly. Beyond that, there are no objectionable themes or actions.

Deaf & Hard of Hearing: Hearing-impaired users will not miss out on any of the game's mechnisms. As it's an old-style game, all words appear on-screen via text, and there are zeor in-game sound cues to miss out on. It's a purely visual experience.

Based on this game’s merits, yes, I think it’s perfect. It’s an amazing distillation and refinement of a classic formula. You have to know what you’re getting into, of course. If you only love MODERN WARFARE, don’t worry about seeking it out – but, I’m sure that’s not you.

Holy cow, a perfect score? I’m not a frequenter of XBLI, but I must check this game out. Great review, Brandon!

What a most excellent re-working of classic formula. More, please, Tribute!

For those interested in more Wizorb, we raved about it on Episode 61 of the podcast. It’s easily the most pleasant surprise of the year, and I’m thrilled to see it reviewed here Brandon. Kudos!

Download it through Xbox Live Indie Games, or through Steam on PC (I think…)!

Certainly looks the part – I love this kind of style. So is it on XBLA or can I download it somewhere or….?