Bored of the Rings 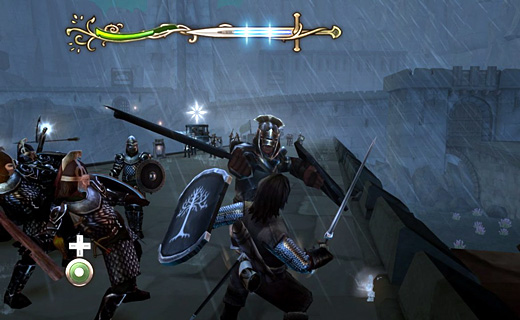 HIGH The cutscenes will make you wistful for the superior films.

WTF Who is this game for!?

Who asked for this game?

It wasn't die-hard The Lord of the Rings (LOTR) fans; this looks like a kids' game. It wasn't kids, since it's rated "T for Teen." It couldn't possibly be teens, since they want a licensed game that doesn't look like it's for kids, nor one that plays like it's from the last generation. Again, who is this game for?

. While there's been no shortage of LOTR games in recent memory, this one caught my eye at last year's E3 Expo. It seemed to be the first straight-up LOTR action title to be released since those that were based on each of the films.

Presented in a simple, storybook style, and featuring anthropomorphized versions of the story's beloved characters, the game seemed to take a more light-hearted (and family-friendly?) approach to these modern classics. To think of experiencing a new story from the LOTR universe with an accent on the cuddly was exciting. Unfortunately, the game ends up eschewing any promise of such calculated whimsy, and instead renders itself as dopey as a cut-rate Saturday-morning cartoon.

At its core, Aragorn's Quest is a third-person action game that focuses on lots and lots of melee swordfighting (with a little archery and horseback riding thrown in for good measure) but basically it's lock-on to enemies and waggle like mad. That's right, the Wii version includes no option to use button control, so it's lots and lots and lots of swinging the controller like a sword.

Players can co-op with a partner taking on the role of Gandalf the wizard (who has his own magical attacks) but the combat remains largely unchanged. Honestly, this is the type of gameplay that was momentarily interesting when the Wii first hit the shelves, but now just feels sloppy. Combined with the game's wooden character models, it would have been barely tolerated as a Wii launch game, and far inferior to, say, Twilight Princess. I was hoping, then, that a charming story would swoop in to redeem it—I was wrong.

As the films that inspired this game are a decade old now, I could only imagine that the main thrust of that story would be a bit stale by now. Surely, there is room for a new narrative with these rich characters and interesting world. Not so, says Aragorn's Quest.

The game distills the main action sequences of the films into a handful of chapters and is satisfied to call it a day. So, it certainly is the quest of Aragorn. That's disappointing. What's really baffling is the decision to link the game's chapters by turning them into a day-long story told by an older Samwise Gamgee to his lovable hobbit offspring. The introductions of these new characters short the game on not one, but two crucial levels.

Where the game promises fast-paced action gameplay that allows the player to "embark on [Aragorn's] greatest adventures," they're soon pulled into the world of Frodo Gamgee, Sam's oldest son. Once the player goes through the game's tutorials as the boy, they are taken back to "Aragorn's quest," where the real action of the game occurs. Players are sadly soon back in the world of the hobbits in order to go through more tutorials between certain chapters. All of this returning to the Shire simply distracts from what the game promises at the start—living an epic quest!

Secondly, the introduction of any new characters gives a player the suggestion that they might have their own story to tell, if even on a small scale. I feel that molding a wholly unique story for this title would have proved most interesting, but if the player is to spend time with these characters and actually play them, they should at least get a story told in tandem with the one they're already familiar with. Instead, nothing is done with these new characters and they're entirely wasted; perhaps an afterthought to a middling game, or a truncated forethought that wasn't serving the source material. After ten years, and other LOTR games providing experiences similar to this, Aragorn's Quest seems like a literal bullet-point on a corporate agenda, and leaves nothing to delight a Lord of the Rings fan of any age. Rating: 2.0 out of 10.

This game was obtained via the publisher and reviewed on the Nintendo Wii. Approximately twelve hours of play was devoted to single-player modes (completed one time) and two hours of play in multiplayer modes.

Parents: According to the ESRB contains fantasy violence. Most of the game's action consists of Aragorn attacking enemies with his sword. No blood is ever shown, nor any sort of gore or dismemberment. If you've seen the films, you know what to expect, though the violence is even softer here.

Deaf & Hard of Hearing: Though the game features much recorded dialog, it is fully subtitled. Also, none of the game's gameplay cues are strictly audio.