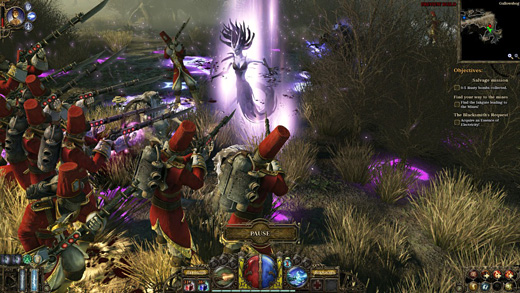 That's the central question I had in the first few hours with Neocore Games's new role-player, The Incredible Adventures of Van Helsing. Turns out you don't fight any throughout the course of the game—not one.

See, in this alternate-history steampunk action game, our hero Abraham Van Helsing's good father (Abraham, Sr.?) not only helped to destroy Dracula, but also set in motion a peace treaty with the vampires of the world, in which they'll keep their nefarious deeds to a minimum. It's an agreement that seems to mimic Neocore's uneasy treaty with their own vampire: Blizzard's Diablo series.

While some might see Van Helsing as a simple me-too action-role-playing game (ARPG) experience, Neocore charges ahead and manages to impress with this solid title. It's stuffed with the requisite ARPG goodness needed to satisfy (baddies, style, loot, and abilities) but also a rough charm, a playful tone, and a few neat twists in a very cost-effective package that beats back any over-comparisons to its progenitor.

Play-wise, Van Helsing hits all the right notes. The steampunk setting is a great place for a title of this type and helps to differentiate it quickly. Though there's plenty of magic, swords, and monsters, the game takes place in more typical, non-fantasy locales around the backwoods of the fictitious European country, Borgova. In other words, it's less dungeons, more labs, streets, and forests.

Combat feels satisfying throughout as well-timed skills tear through group after group of electric werewolves or floating aliens. Eschewing the typical "choose-a-class" structure like most ARPGs, Van Helsing is the player's only character choice—though he can become proficient in melee or ranged skill trees, each with their own magic. Though the special abilities seem fewer in number than the average ARPG selection—and somewhat typical—there are still a few that surprise and delight. My favorite? The Ray of Destruction—a devastating beam of pure energy that quickly turns most foes into pudding.

Another engaging aspect of the game is Van Helsing's ghostly fighting companion, the Lady Katarina. 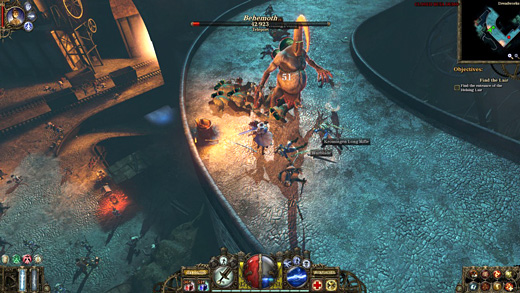 As a "rescued" (?) ghost who's conscripted to serve, Katarina fills the role of the Diablo follower or the Torchlight pet. She fights alongside the player throughout, constantly quipping with, complaining to, or pining for the gruff Van Helsing. In this way, she also helps to give the game a fair amount of levity. Truly, the game's writing comes to life when Katarina opens her mouth. Where Van Helsing could have been a typically dreary fight-fest, writer Viktor Juhasz made sure that Katarina could bring constant doses of lightness to the proceedings, thereby bettering the whole game.

Her addition is not simply cosmetic, however: Katarina may be used as a melee fighter, a ranged attacker, or simply as defensive buffer in combat. Neocore also had the great idea to make her behavior extremely customizable. She has her own inventory for copious amounts of loot, and she can be customized to pick up only the items the player wishes her to.

One other interesting wrinkle to note is the tower defense gameplay that appears about a third of the way through the campaign.

Once Van Helsing is ensconced in his cleverly (and intentionally?) titled "Secret Lair," there are a couple of missions that see him protecting the entrance from waves of enemies. I felt these missions synced very well with the steampunk aesthetic, as players are tasked with placing various mechanical deathtraps for the invading hordes—things like flamethrowers, monster crushers, or whirling spike pits. These missions were welcome distractions from the core gameplay, and I'm actually shocked that they wasn't expanded upon. Extra traps, or even more maps would have been quite cool.

Sadly, there are a few unfortunate setbacks that keep the game from ultimate greatness.

At the time of this writing, the game's multiplayer component is very difficult to enjoy. I experienced connection lag and freezing, and it seems to be a complaint that's popping up a lot in the game's forums. Neocore is well aware of these issues. Aside from that, my other complaints are fairly small, but one worth mentioning is the Forge System.

Basically, Van Helsing's Forge System combines unwanted weapons and armor into new, random, and (possibly) more powerful pieces. I spent a few hours on just this feature alone, scoring a few marginally better items. I ended up growing tired of it about halfway through the game, though. After putting so much time into forging, I rarely got results that were substantially better than what I put in, thereby negating the hours invested. The luck factor should be cranked up a notch here.

As an action-role-playing game, The Incredible Adventures of Van Helsing does not disappoint, especially for anyone starved for more of this particular sub-genre. It may hew closely to some established forms, but it brings some freshness to the table and stands solidly on its own two feet. The best thing to recommend it, however, is its excellent price point. For $15, you can't beat this package. There may not be any vampires to battle, but that just means there's no sucking going on, either. Rating: 7.0 out of 10.


Disclaimer: This review was written after a review event at the Neocore Games studio, in which travel and lodging were provided. This game was played on a developer PC. Approximately 22 hours of play were devoted to single-player modes (completed one time), and one hour of play was spent in multiplayer modes.

Parents: This game has not been reviewed by the ESRB, but contains constant violence. Blood is not overly abundant, but there are plenty of instances of monsters exploding into bits. The game contains little objectionable language or sexuality.

Deaf & Hard of Hearing: Hearing-impaired gamers needn't worry about their experience, as subtitles are provided for every interaction. No sound-specific cues exist to alert players, either.

the forge system has me sold.