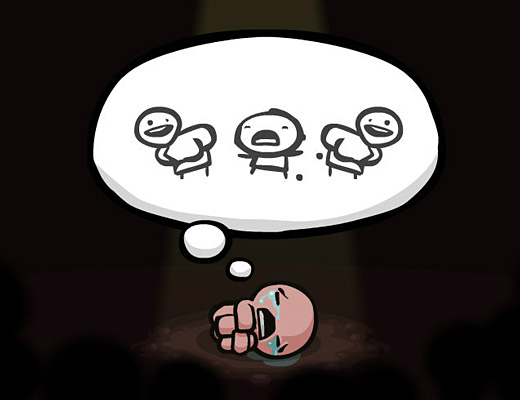 HIGH Nothing better than wearing your mother's clothes while fighting monsters with laser tears alongside your floating stillborn brother.

LOW Completely misjudging an enemy's projectile can really stick it to you.

If the testament to a game's quality is the ease with which it convinces you to engage with it, nothing in the past year has been better than Edmund McMillen and Florian Himsl's The Binding of Isaac.

Perhaps it's the fact that it's PC only, so its attachment to my work machine puts it just a couple of clicks away from me. I'd rather think, though, that the game is oh-so-cleverly designed and oh-so-deliciously replayable that I just can't stay away. Simply put, consider the game's average length (45 minutes) to the overall time I've put into it: 56 hours. Does that speak clearly of its clarion call?

Players control young protagonist Isaac, escaping his fanatically Christian mother. Upon hearing sacred words from the Lord, she attempts to play Abraham and sacrifice her son for the greater good. Escaping through his home's scary basement, Isaac has only his many tears to defend himself against not only his mother, but legions of creepy-crawlies and some other genuinely disturbing monsters.

Isaac is basically a twin-stick shooter, but it's also a "roguelike" game that's accessible for gamers like me who haven't had a ton of experience with the genre. For the uninitiated, the dungeons in the game are randomly generated every time they're played, and the game's rules are very stringent. These rules may screw a player over from time to time, but they can also give an advantage in certain situations. Got a "one shot kill" kind of item to save for a strong monster? Use it on a boss monster and get the same result!

These types of games can be difficult, yes, if one is extremely unlucky, but they can also lead to genuinely thrilling victories in said case, or really quick playthroughs in the opposite. As Isaac crawls deeper into the ground, moving ever further from (or ever closer to?) his mother, the Legend of Zelda-style dungeons get bigger and enemies get badder, so Isaac must simply cry harder.

Yes, Isaac FIGHTS WITH HIS TEARS. 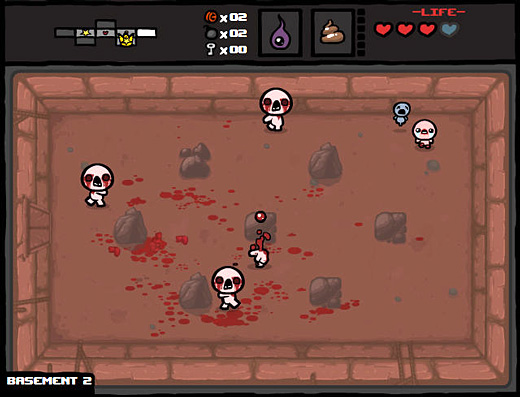 If that's not comedy gold enough for one to keep playing, one should stop reading right here and get on back to some super serious stuff like Sound of Obligation: Current Fighting 4. I mean, the power-ups that affect said tears come in many forms, but check out these examples—want to cry faster? Pick up the Sad Onion. Want to cry harder? Pick up a dead puppy's head. Want to cry farther? Why, pick up Mom's Lipstick, her Underwear, or her Heels.

Yes, every one of Isaac's more than 100 items gives better performance, but most are also themed in ways that make lots of ghastly sense. Beyond that, every one of them also affects the look of the character, creating—by the end of the game—a hilariously deformed avatar that is truly a sight.

I've always preferred games that have a fair amount of chance to them, and Isaac and its pickups provide this type of excitement in spades. The times I've played the game have delighted me with the thrill of the unexpected. Mostly, it's due to the dozens and dozens of ridiculous and sometimes horrendous items that are not only useful in play, but also demand bouts of experimentation from their players. It's a true testament to McMillen's craft that he's thought up so many tweaks for his very simple game; Mom's giant bra freezes adversaries in their tracks with wonder. The Noose lets players float over the dungeons' terrain. It's fantastic.

If I've any complaints to level at the game, they're few.

At times, one can get bogged down in slot machine grinding when overloaded with money and desperate for an item. Also, it can be hard to tell where certain enemy fire will land, making for sometimes frustrating damage, though this might only have to do with my level of color-blindness… Oh, and I might mention that if you're looking for native controller support, you're left to your own devices and pointed to the program Joy2Key. It was an annoyance that I got over, but it made another reviewer here at GC a little hot under the collar.

The Binding of Isaac is available on Steam for PC right now. Get it; it's phenomenal and a bargain. I wish I could say that it's available on your console, yet it's not. Just a guess, but maybe its absence has something to do with the game's inclusion of sauntering vaginas that attack you with jet streams of blood?

Vaginas aside, what we really have here is a masterful game about the terrors of childhood that is not long, but wide. One may play for an hour or two, but they're constantly tempted to go back in and uncover the scads of remaining secrets. It's a style of game that really intrigues me, and one I want to see more of.


Disclosures: This game was obtained via retail and reviewed on the PC. Approximately 56 hours of play were devoted to single-player modes (completed 12 times).

Parents: This game has not been rated by the ESRB. It does contain some mature subject matter, though it's depicted in a cartoon-like fashion. For instance, there is a fair amount of blood, many scatalogical references, and some very unfriendly monsters that may or may not resemble parts of the human anatomy.

Deaf & Hard of Hearing: Deaf and hard of hearing gamers should not have issues with gameplay at all. There are a few boss fights that have sound cues, but not without coinciding visual cues, as well. The game's opening sequence does contain speech without subtitles, yet the simple story is also told via pictures.

I agree with your comment. I just got that Golden God achievement yesterday! So freaking awesome how I’m still playing Binding of Isaac to this day, even though this review came out years ago.

It has been a long time since launch and it is still one of my favorite games. Can’t believe how much content is in such a small game. I must have beaten Mom multiple times in this game but yet I still keep coming back for more.

I picked up ISAAC off Steam a few weeks ago based on another review I read, and it hasn’t disappointed me in the slightest. It’s nice to see games that are more focused on the gameplay than on marketing strategies and maximizing revenue. Obviously the quirkiness of this game will “hold it back” in some people’s eyes, but the developers really did a fantastic job with it.

Thanks for the kudos on both the review and the show, Gary! Please don’t tell anyone, but I also sunk a shit-ton of time into BEJEWELED 3. Geeeeeeeeeee…

ISAAC is such a great, great game. I can’t believe you got the Golden God cheevo; you’re a master.

Regarding STATE OF PLAY, thanks again. When Season Two rolls around (in June?..), it’s gonna be heaps better, I think.

Well done Brandon, my words exactly on this magnificent game. And definitely the most addictive game I played last year other than Bejewelled 3 and Terraria haha. Funny enough you say 56 hours of play, because I’ve spent that exact amount of time on the game as well, getting the Golden God achievement on the 56th hour. Yay. Off-topic: Another well done on the whole State of Play venture. You always seemed a little nervous in every episode, but then again, it being a first-time thing and you asking questions to people as or more awesome than you. It can… Read more »

definitely one of the very best, and most overlooked, games of 2011. I thank god (or whatever McMillen prays to) that Edward McMillen and Team Meat have just started what can only be a plethora of indie game magic – here’s to more of it.