In the Boom-Boom Room 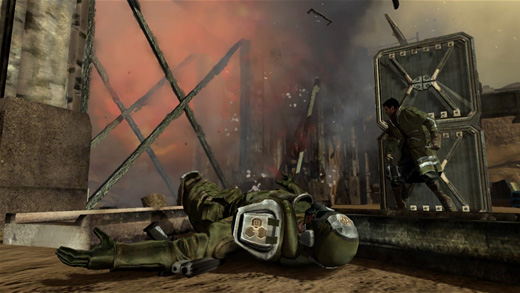 HIGH Watching your very last explosive take down the crucial pillar that brings down an entire structure.

LOW Driving vehicles across the entire map within a ridiculous time limit.

WTF "When did those twenty guys appear?! Gah!"

Our slavering, animal desire for destruction knows no bounds. As gamers, we subvert these desires into the countless headshots and sixteen-hit combos that our forefathers were never so lucky to receive. Volition's Red Faction: Guerrilla aims to up the ante a bit on all of these gaming tropes by throwing into the mix something explosively new (if you'll excuse the pun): demolition!

Coming over five years after their last excursion with the franchise, Guerrilla takes the series out of its first-person-shooter roots on the PlayStation 2, and instead turns it into a third-person actioner with heavy emphasis on vehicles. Think of it as Grand Theft Auto on Mars. And no, in this case, that's not an insult. Guerrilla keeps plenty of open-world game conventions that work and adds enough of its own to make it a satisfying action experience that hits not a few great high points along the way.

As miner Alec Mason, the player is tasked with (almost) single-handedly liberating the human settlement on the planet Mars from nefarious government agents, and Guerrilla features plenty of driving and third-person shooting in palatable and easily digestible chunks. The thrills come along with the series's mining angle, which emphasize not regular old mining-mining, but rather using those tools to raise hell around your enemies. Mason's two basic weapons that become the game's mainstays are his sledgehammer and his remote explosive charges. Both offer up exciting and versatile ways to smash enemies and structures into dust. Bringing down a whole building can be a marvelous thrill, and it's easily done with the right placement of Mason's remote charges. Okay, while not always easy to do quickly, mastering the of demolition is quite satisfying. Volition gets a lot of mileage here with scenarios that have players racing to take down a structure before the next wave of enemy vehicles arrive on the scene.

The game's main focus is on liberating five main sections from control of the evil agents, the EDF. This is done in each section by taking part in missions requiring you to generally destroy strategic buildings and/or people, along with the occasional escort or defense mission. Once sections are nearly "free," the odd side mission must be tackled to move on to the next sector. These side missions range anywhere from the thrilling (the mobile rocket launcher sections riding shotgun with the loopy anarchist Jones) to the execrable (the finicky vehicle-scavenging "race" missions). As far as the game's focus on shooting and driving go, everything checks out in a completely average way. Vehicles are believably responsive in the Martian dust, and the regular assortment of weapons are here for your shooting enjoyment. Most of these weapons are completely serviceable, but some of the later, heavier ones are quite fun. The Singularity Bombs, the (massive) Thermobaric Rockets, and especially the Nano Rifle serve on both fronts as effective man and building killers—which blend the game's objectives thoroughly. Yes, the game works swimmingly when one is simultaneously crushing skull and structure.

Which leads to the game's few shortcomings. When it comes to just plain shooting, Guerrilla has a bit of a rushed feel to it. It's hard to tell at times if weapon fire connects with enemies, and certain guns feel ridiculously underpowered. Another complaint rests in the ability of the enemies to spring up from nowhere and surround the player. Perhaps it was simply "Hard" mode, but there were many times when I felt alone, and suddenly there were four troops right next to me. The mini-map that shows these troops via the obligatory red dot was often hard to read, as well—leading to fair amounts of restarting missions. Guerrilla certainly could have used a few more months in the old production oven, for better or worse. The scruffy charm is nice, but a few coats of polish could have increased the game's impact a bit.

One final complaint, but one that heavily affects the game's tone, has to do with the game's currency, "Salvage," that falls from the wreckage of the world's buildings. In order to curb one's wonton destruction of everything, Salvage only falls from buildings that are property of the enemy. While this prevents the player from earning "money" for destroying the good guys' property, what if there were choices involved? If "good" buildings yielded currency as well, it would be interesting to present the player with the choice to bulk up their arsenal while destroying the good guys' infrastructure. Would one trade a souped-up rocket launcher for loss of friends and resources?

Ultimately, Red Faction: Guerrilla is special. You know what makes it so? It almost serves as a living apology for Mass Effect's dry, dry planetary excursion missions. This is how those missions shoulda played out. The setting alone is a great place to put on a good show, and Volition succeeded. Red Faction: Guerrilla scores, and it certainly adds a nice twist on the established open-world game formula. Blowing up things real purty is good for the soul, it would seem. Rating: 7.0 out of 10.

Disclosures: This game was obtained via retail store and reviewed on the Xbox 360. Approximately 13 hours of play was devoted to single-player mode on the "Hard" difficulty setting.

Deaf & Hard of Hearing: All of the game's dialog has the option of being subtitled. Additionally, no outstanding audio cues impact the game's action.

Joking aside, RFG is a blast and well worth the (low) price.