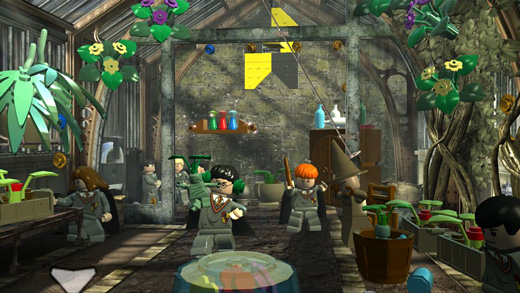 LOW: The spell-targeting can drive you batty.

WTF: "And the Lord said 'Collect-a-thons shall not get thee to Heaven.'"

Chances are you come to Lego Harry Potter for one thing: you love Lego-brand building bricks! …Wait, you love the Harry Potter series of novels and films—yeah! No, no: you love video games! That's…. Wait, you…. You love all three! (Pant, pant.) Well, no matter your varying levels of love for any parts of the above, there's a good chance that you're likely to pass a contented hour or ten with Lego Harry Potter: Years 1 – 4.

Returning to their gold-lined, plastic-studded well once again, developer Traveller's Tales has brought to our screens another iteration of their popular Lego-themed video games. Here, they've turned out probably the most free-wheeling version yet, though it doesn't stray too far from the established formula.

Like the previous Lego-themed games, players set off for adventure across a shiny plastic world controlling the avatars of one of our beloved pop-cultural icons. The focus of the action is aimed at a younger audience with emphasis on casual gameplay mechanics that aren't too taxing, but it comes replete with additional challenges and collectibles to keep ahold of older or more experienced gamers.

The formula has always been wonderfully charming, as seen in their original Star Wars-themed games, and the same is absolutely true here. The Harry Potter franchise turns out to be a perfect fit for Lego, as "magic" serves as an excellent vehicle for making piles of bricks fly through the air and assemble themselves into wacky shapes. The loopy tone of the books also syncs up with the Lego games' reliance on silly re-imaginings of their beloved stories.

Gameplay is largely similar to the other Lego games in the canon: break blocks, build shapes, and collect various doodads to unlock bonus levels. There's also a bajillion unlockable characters, all with their own special powers and spells. Controls work just fine, though aiming spells can present the odd headache. With so many things on-screen, the auto-lock feature will often lead you to target the wrong item. Light platforming elements also return, but there seems to be a little less emphasis on them since the Indiana Jones and Batman outings, which comes as a relief. Platforming has never been the series' strong point, an I'm not missing the frustration of falling into the same pit over and over and over.

The Lego series' hallmark transgression, however, returns: the pushy emphasis on non-stop collection. Now, most gamers don't mind collecting a few in-game doodads, especially if it unlocks a bit of bonus content. The Lego games, however, have always taken this to a new level. While you don't have to collect much of anything, whenever you do the game trumpets this achievement with blaring thunder. It's distracting, really, all of the deliberate and constant quantifying of the game's progression. There's even a "percentage compete" score displayed during certain screens with a decimal point! ("I've taken 12.7% more of the remaining fun from this game today; what an accomplishment," says Joe Gamer.) After a while, it bogs one down, and it simply undercuts the game's pure charm.

The game makes up for some of this undercutting, with its lovingly-crafted inclusion of many of the moments from the books and films. The cut scenes are satisfyingly silly and sometimes even funny. Though players will revisit many of the same locations though their "years" at Hogwarts Academy, there were dozens of little elements in the world that changed as the years progressed. These tiny details put more than a few smiles on my face.

Ultimately, any gamer who loves Harry Potter is going to enjoy themselves immensely with this game. While older gamers might not find many reasons to give it more than a good weekend's worth of play, the younger ones will have hours and hours of spell-casting fun.

Disclosures: This game was obtained via retail for the Xbox 360. Approximately 16 hours were devoted towards one play-through of the game's story.

Parents: This game is rated E 10+, and is classified as an "official" Xbox Family Game. Aside from mild plastic-on-plastic violence and a few scary situations, there's nothing to fear here.

Deaf and Hard of Hearing: Only a few "clicks" to indicate the passage of time during timed sequences might get in the way of your enjoyment of this title. It's also worth noting that the cut-scenes are completely wordless.