To Retail and Beyond 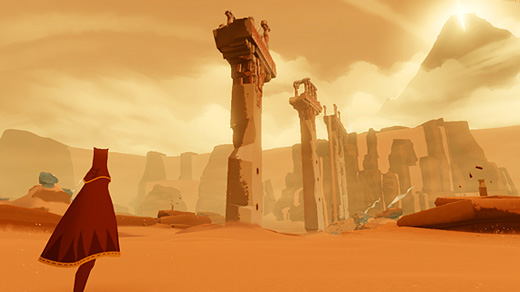 HIGH Surfing the Sunken City in the fading afternoon—absolutely gorgeous.

LOW Can't we have more?

WTF Put on a scarf and fly!

Our gaming universe continues to grow and expand daily, it seems. To wit: just what makes a gamer a gamer? Not a new question. While the rational part of us shall, of course, be ever more all-inclusive, some might still bristle at the thought of being lumped in with Grandma Gamer and her latest version of Online Bingo (something this writer is guilty of).

To quote an old professor of mine when we showed resistance to foreign concepts: "Let it wash."

This, of course, is the answer we all must come to if we are considered truly open to the power of interactive entertainment. How heartening it is, then, to see game developers like thatgamecompany guiding us along to this nirvana. Truly, their new work Journey is a remarkable step in the right direction—a game that impresses as it lives up to its namesake, crossing boundaries in more ways than one.

The previous games from thatgamecompany have been beautifully and meaningfully minimalist, and Journey is no different. Both Flow and Flower are testaments to a beautiful marriage of simple mechanics and singular audio/visual trappings. While Journey's scope expands the palate quite a bit, the gameplay remains elegantly concise.

Players control a robed avatar who awakens in a vast desert, tasked simply with investigating a glorious light atop a distant mountain. They'll lead their curious hero through amazing landscapes peppered with monstrous architecture (a la Fumito Ueda), and as they travel, they'll discover that with the help of some mysterious fabric, they can leave the ground and soar effortlessly through the air. The further they progress, the longer they can leave the ground, leading later in the game to some truly exhilarating moments of flight.

Journey is an absolutely gorgeous experience in terms of atmosphere. The massive, dwarfing landscapes have an incredible out-of-time quality that makes them truly ancient while feeling wonderfully alien. At the same time, the graphic design is simple and gorgeous, achieving a storybook quality that is guaranteed to catch the breath of even the most jaded gamer. Combined with the moving soundscape by composer Austin Wintory, Journey becomes a must-play for anyone who appreciates video game artistry.

With all that said, it's still quite short and simple. Interestingly, this clarity of vision is exactly where the game has the capacity to disappoint on some level. It's practically unavoidable as thatgamecompany moves to build games that are "bigger" and even more engaging. After all, the average hardcore gamer expects a certain amount of content (sometimes simply a tally of hours) to feel they're getting their money's worth. thatgamecompany has made a game in Journey that has moved closer to the mainstream idea (read: Retail) of what a game looks like, and in doing so, customers might find it lacking a certain level of content they've come to expect.

This was an undeniable challenge for the small thatgamecompany, one that was surely debated heartily in this game's creation. How simple should a game be kept to appeal to the vast majority of not just dyed-in-the-wool gamers, but the population as a whole? This has been the mission of thatgamecompany since its inception, and understanding this in context illuminates the aim of this entertainment. While a certain level of challenge may indeed feel absent for the hardcore gamer, the game's forthright beauty manages to help us forgive these "oversights."

Consider the personal experience of this writer's significant other, who, while not the serious gamer, was simply amazed by Journey's one-of-a-kind world. This was not just the look of the thing either—she was compelled to play it through to completion, relishing nearly every second of the experience. While watching her, thatgamecompany's ideas had never been clearer, and even seemed brave: "This is for everyone. Core gamers: come, too, if you want."

Whether it's seen as an incomplete art object or a transcendent masterpiece, Journey is beautiful from its solemn opening to its masterful ending. The end result is not only a parable for human life in game form, but also a literal journey for developer thatgamecompany as they move from smaller projects to bigger ideas, all the while helping to redefine what it means to make games for the masses.

No matter whether one perceives a dearth or abundance of complicated mechanics amid the sensual splendor, thatgamecompany has hit on that Certain Something put so well by The Bard:


Disclosures: This game was obtained via publisher and reviewed on the PS3. Approximately six hours of play was devoted to single-player modes (completed two times).

Parents: According to the ESRB, this game contains mild fantasy violence. Parents have nothing to find offensive here, as the level of violence on display is nothing compared to the average Saturday morning cartoon.

Deaf & Hard of Hearing: There is no spoken language in the game, so deaf gamers won't feel left out. There are a few enemies whose appearance is tied to audio cues, but the number of said enemies are few, and consequences of their attacks are small.

Evan, Indeed I did play JOURNEY online with other people. I was impressed with the way that TGC implemented this aspect of the game. You’re right that it is very DEMON SOULS-ish. My personal experience with it was very nice and I was happy that it was implemented so smoothly and surprisingly – I appreciated that the uninformed gamer would suddenly and surprisingly be joined by a friend. Ultimately, however, I felt that I wanted to write about the game’s ideas as a whole than I did the multiplayer. Honestly, it was a nice surprise, but since the overall amount… Read more »

From the lack of any mention of meeting other people, and the description “approximately six hours of play was devoted to single-player modes”, it seems like you skipped the co-op play. You really missed a fundamental part of the game that needs to be addressed in a review. The co-op play is beautifully crafted to encourage genuine co-operation and to discourage dickery. I’ve played the game myself, and watched others play it, and every time we felt a real connection* with the others that we anonymously played with. It’s a more austere version of Demon’s Souls’ co-op, and it transforms… Read more »

Very nice review. I agree that the game is simplistic, but that’s not why we play this or any other of thatgamecompany’s offerings, is it? I just finished up the game last night, and will be starting it over again tonight!