Love as a Puzzle 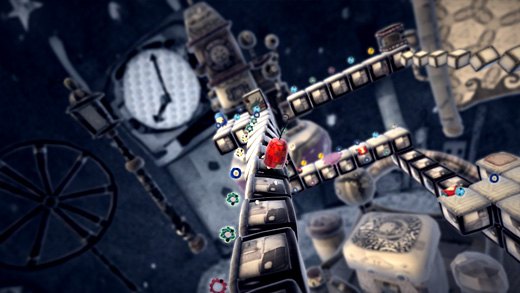 LOW A cute music track is cute until you hear it looped 37 times.

WTF The narrator calls out the silliness of Gears of War at one point; priceless.

The next entry in the puzzle genre is never far off.  Most gamers would be hard-pressed, however, to find one as unstoppably cute as Southend Interactive's ilomilo

. Fuzzy characters frolic and chirp, and cute oompah bands celebrate special token pickups, all while the dulcet tones of a kazoo fill the air.  If adorability were all that made a great game, the work would be finished here.

Southend, however, has also crafted a solid puzzler that not only works well, but takes some stabs at wringing real emotion out of a simple premise.  While that emotional connection is never fully exemplified by the gameplay, anyone wanting a brain-teaser that's long on looks will enjoy most of what ilomilo brings to the table.

ilo and milo (in lowercase, yes) are two adorable plush-looking creatures whose best friend status is constantly threatened by their unfortunate predilection for losing track of each other every ten minutes. The player is tasked with alternating between the two as they search for each other in a world of floating cubes and wacky devices.

The mechanics of the game start out very simply, as they do in any good puzzler, and slowly build to further engage and challenge players. Control of the characters is streamlined by using only one action button—the others are only to adjust camera settings, and progress is never more difficult than picking up cubes to form bridges or cross gaps.  It gets more complicated when manipulation of gravity is introduced, though. Players will then see the characters moving along the sides of cubes, turning the world on its head.  This convention puts ilomilo into similar dimension-shifting puzzle games of late like Crush, echochrome, and the upcoming Fez. The effect is delightfully dizzying at first, but will present some stiff challenge in later puzzles.

Before the game gets too maddening, pure charm oozes from the game in healthy doses. The music is delightful, the cut-scenes well-done, and the gonzo visits from the resident sage, Sebastian, are informative, funny, and tinged with heavy doses of nonsense. The charm also extends to the lineup of puzzles presented to the player. 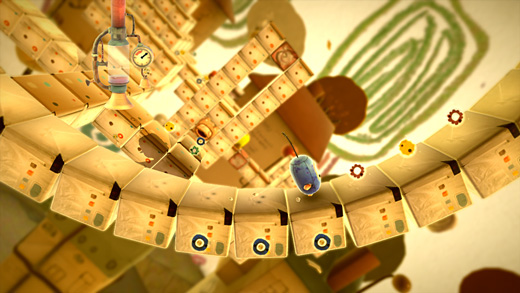 The designers have eschewed the straight-line difficulty curve of other puzzlers, and instead opted on changing up the amount of challenge from stage to stage.  This ensures that players aren't turned away by an ever-growing difficulty beast, in the same way that many puzzle games have overcome this writer.  There's an elegance, too, in the way the introduction of game conventions ebbs and flows in and out of levels.  Each of the chapters introduces a new convention, but doesn't necessarily pile them on each other in more and more difficult ways.

That's not to say that the game is easy—only that each new element of the game is given plenty of specific puzzles before they're thrown in with concepts introduced before.  The variation makes sure that younger or casual gamers have more chance of seeing the game's ending, while the hardcore minority can collect difficult-to-reach collectibles and consequently play each chapter's beefier bonus levels.

While the mechanics of the game are solid and enjoyable, Southend should also be commended for trying to wring real emotions out of their players. The story showers the game with definite themes of loss and melancholia, and the main mechanic neatly encapsulates the ends we go to in order to reconnect with the ones we love. (Literalists could also say that the more we search for loved ones, the more difficult it could become.)

The experience of actually connecting with the darling main characters never quite happens, however, as they aren't characterized by anything other than the fact that they're searching for their better halves.  I can't imagine that ilo and milo need to be more than representatives for the desired themes, but the game never quite seems to convey the depths of emotion the designers were after in their inclusion of things like old collectible memories or Sebastian's sad story.

Perhaps this disconnection lies in the fact that once the difficulty begins to ramp up, the cute factor can become less window dressing and more of a constant buzzing in the player's ear.  There were times on not a few puzzles where the baroque music and the chirpy sound effects seemed to be laughing in my face, calling out the size of my small brain.  It got exasperating a few times, let me tell you.  Similarly, a few of the later puzzles have solutions that require some actions that don't quite make sense in the world.  For example, using the characters' heads to stop a rising block seems out of place in the plane they inhabit…

is a successful puzzle game that's sure to delight.  Most challenges are fun and satisfying, while never quite out-of-this-world difficult. While the addition of the emotional element doesn't quite fulfill its promises, it's easy to overlook in favor of the careful presentation. Rating: 7.0 out of 10.

Disclosures: This game was obtained via publisher and reviewed on the Xbox 360. Approximately 25 hours of play was devoted to single-player modes (completed once) and one hour of play in multiplayer modes.

Parents: According to the ESRB, this game is rated for Everyone, and contains no objectionable material for younger children.  There is a story involving an injured animal, but nothing that would be considering disturbing.

Deaf & Hard of Hearing: You will lose nothing in your experience.  There is no real speech in the game, so all words are subtitled anyway.  No sound cues are essential to gameplay.