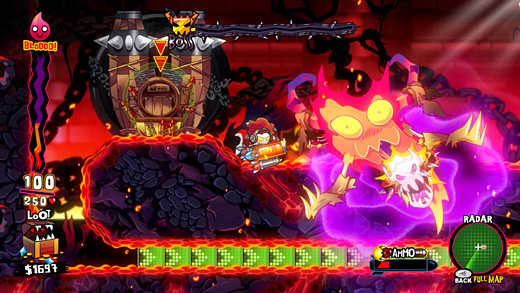 HIGH Our hero gets freaky with a toy duck.

WTF Our hero gets freaky with a toy duck?!

To paraphrase a recent statement by Derek Yu, creator of the fantastically frenetic and excellent Spelunky, game designers should see themselves as chefs. They have so many ingredients at their disposal, and they should use them in ways that complement each other, not just pour in ideas willy-nilly. French studio Arkedo's recent Hell Yeah! Wrath of the Dead Rabbit couldn't exemplify this statement more. Its pleasingly silly premise and catchy cartoon visuals set the stage for some gloriously wacky, throwback action. With little substance to back it up, though, it ends up a distressingly saccharine sugar rush.

It didn't have to be this way, though. Hell Yeah! has so much going for it—its bright, cartoon-like visuals immediately draw in any gamer who gets off on an old-school, Saturday morning kind of vibe. The tone of the game follows suit: it may take place in Hell, but it's a flashy, silly version of Hell that immediately catches eyes. I will admit that I'm a sucker for visual flights of fancy, but based on its visuals alone, Hell Yeah! was anticipated by yours truly as a probable compact gem with lots of promise.

Hell Yeah!'s main action consists of guiding Ash, the Prince of Hell, on his journey to get back the aforementioned incriminating photos by destroying the 100 unfortunate monsters that stand in his way. Why Arkedo decided to include 100 of these guys is unclear, as once even ten of them are vanquished, the player understands exactly what he's in for.  Enemies either hang out with minimal defenses waiting to be gunned down, or they present a simple block or switch puzzle that somehow does them in. 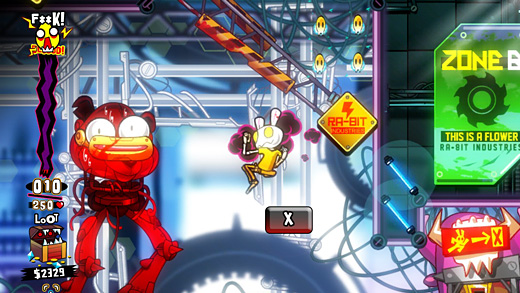 As players maneuver Ash through essentially linear mazes, the layouts are very basic, and start to feel cut-and-paste from world to world. There is the odd vehicle section to mix up the action, but these also fail to excite.

What does get a reaction? Unfortunately, it's the game's awful prevalence of hard-to-see insta-death spikes. They're a not entirely unwelcome old-school staple, but there should have been another way to implement them in this game. The colorful, bouncy world can make them hard to locate amid the madness. Halfway through the story, I was ready to toss controllers with how many times I was leisurely rolling over them.

So, what about the monsters? Here, too, Arkedo gets us excited, then lets us down. As mentioned before, each of the monsters has a WarioWare-style micro-game finisher that does them in in a "hilarious" way to mix up the killings. Sadly, there are only about a dozen of these finishers between the 100 mini-bosses, so repetition sets in very quickly. What should be the best thing about the game's battles, and something (however tiny) to look forward to, becomes stale far too quickly.

In what can only be attempts to beef up the thin material I've described, main character Ash can indulge in dozens and dozens of pieces of customizable gear in the in-game store that are purely cosmetic. If they're anything like me, most players will be uninterested in decking out their character if they can't get some base enjoyment out of what they're dressing up. Further, there's a bizarre monster resource management game called "The Island" that provides some (negligible) in-game rewards, and could be described as half-baked at best. It's also only accessible through the main menu.  You literally have to quit the game to play it! Why include it in the proceedings at all if it's not even readily accessible?!

In the end, Arkedo has shown up to the party to share with us a huge ball of digital cotton candy; as soon as we get a taste of its ultra-sweetness, it's already evaporating. Fans of the game might counter that there's nothing automatically bad about a trifle of a game, but there's also nothing automatically good about one, either. Rating: 4.0 out of 10.


Disclosures: This game was obtained via publisher and reviewed on the Xbox 360. Approximately seven hours of play were devoted to single-player mode.

Deaf & Hard of Hearing: You should have no issues enjoying the game. There is minimal spoken text, and all is subtitled.  There are also a few specific sound cues that affedt the game, but they're also pretty well telegraphed visually.