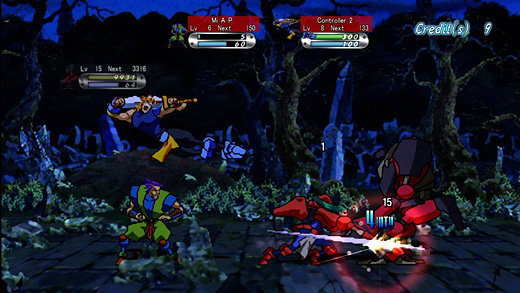 HIGH Realizing that I was good enough to finish on Normal after my initial stumblings.

LOW I don't like straining to see my character in a sea of enemies.

Living in Southern California, I see my fair share of "classic" automobiles cruising the streets. Given that this area is basically the birthplace of car culture, it goes without saying that I might see more here than anywhere else. Perhaps that's why I couldn't help but compare said cruisers to Sega's new update of the Saturn classic, Guardian Heroes

, just released on Xbox Live Arcade. Yes, with a humming engine, a nifty new paint job, and a few odd details protruding in ridiculous directions, Guardian Heroes shows us how updating a classic video game is just as rewarding as soupin' up granddad's old jalopy.

If you're like me, you probably missed Guardian Heroes the first time around on the Sega Saturn. Back then, it was considered one of that ill-fated system's finest titles, and if you ask me, I could see why as soon as I got my hands on it. It's a beautiful 2.5D brawler/"beat 'em up" unlike much in my gaming memory banks.

Since the game is basically an update, I won't go too much into detail about its structure or its basic ideas.  Suffice it to say that four adventurers brawl with numerous baddies, utilizing unique abilities and magic attacks, while leveling-up along the way.

Of course, since this is a Treasure-designed game, the fighting system is the core of the experience, and it is top-notch. As they've shown time and again, Treasure has a real knack for vigorous technical systems that feel simultaneously simple and broad; polished and unique. Each character here has their own set of moves that emphasize the game engine's different aspects, each providing a unique challenge to master. It's hard to deny the delicious bygone era of brawling action like this—there's just not a lot of modern stuff to compare it to.

What makes Guardian Heroes special and memorable, though, is the way in which every aspect is crafted to emphasize the robustness of its engine. 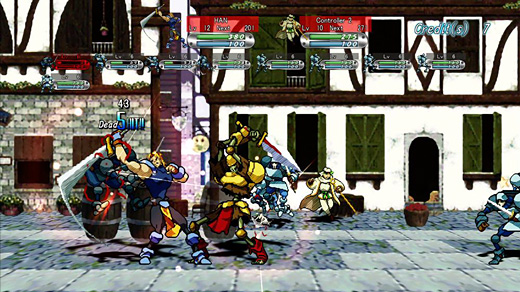 Take the campaign, for example. It's almost laughably brief by today's standards (in fact, a seasoned vet could push through it in under an hour) but the game's numerous branching storylines ensure that players who take a shine to it will dip back into the story to discover the different paths, boss fights, and numerous different endings. It's almost like Treasure was admitting that it's not the story of a game like this that ultimately compels a player—no, it's the ways in which the player gets to stylishly whoop some ass. Further, the versus mode comes fully fleshed and features many of the secondary characters, providing a great opportunity for fans to show off their mastery of the game's workings.

The graphical and gameplay polish add beauty to the proceedings, but Sega should be commended for the ways in which they have re-tooled the game for easier play, both in terms of control and in visuals. Special attacks are now a little easier to perform, a few small moves have been added, and the stats overlays have been cleaned up for a more streamlined look. Purists needn't worry, however, as the entire old-school experience is just a joystick click away. That's right, the original game is intact if the player wants it just as it was.

As far as the notorious Treasure difficulty, I'm happy to admit that it's there if you want it, but thankfully, beating the game in Normal Mode is possible with a bit of practice. Beating Hard Mode, however, is a Sisyphean feat worthy of serious praise as players only have three continues and face swarms of relentless enemies.

This brings me to the few quibbles I have with the game; the first being the fact that said swarms of enemies sometimes make for a ridiculous pile of pixels on the screen. Making out the action can sometimes give one a real headache when there are more than three enemies at once. Add another player in multiplayer mode, and you're talking about a lot of potential confusion.

Another less annoying (but more beguiling) thing is the way the game prods players through its branching storylines. The path choices are sometimes based on random lines of dialogue that don't seem to mean much of anything. Saying them, though, can suddenly whisk the player up to four levels ahead, making the going a little tougher than they may have wanted.

Lastly, I gotta point out the hilarious original music that's still intact. The game's music is so '90s, it's incredible. I mean, it's been a while since I've heard churning rock guitars being drowned out by a raging saxophone. It's amazing. I guess this isn't really a quibble, per se, but more of an oddity. It's good for a laugh at the very least.

Those who missed it the first time around or those who're looking for a strange, beautiful, and challenging throwback should certainly take a look at Guardian Heroes

. It's prettier, smoother, and just as satisfying as ever. Here's to filling up our digital garages with the  classics; they're still great for a spin once in a while. Rating: 7.0 out of 10.


Disclosures: This game was obtained via publisher and reviewed on the Xbox 360. Approximately 7 hours of play were devoted to single-player modes (completed two times) and 2 hours of play in multiplayer modes.

Parents: According to the ESRB, this game contains violence and blood. Aside from the fact that your child may be murdering hundreds of characters, the level of brutality on display is pretty tame, especially by today's standards, with a minimum of blood. Further, the cartoon-style visuals and the overall light-hearted tone won't give many parents any worrisome headaches.

Deaf & Hard of Hearing: Hearing-impaired gamers have nothing to fear hear. Aside from missing out on the original Japanese bleatings of the assorted characters, all dialogue is subtitled. Further, no sound cues are used to give any contextual game information.

I did play as Han, the brute, and yes I did find him to be a bit easier to understand than I did the ninja. What I appreciate about this game (like some other Treasure titles) is the way in which going back to the other characters changes up the game a good deal. I love the challenge of moving on to figure out the others!

I’m curious about the GBA installment – I missed that one, too. Maybe I’ll dig it up soon and and plug it into my DS Phat (which is still kicking since 2003…).

Great review. Summed up pretty closely the feelings I was having about the game.

Just out of curiosity, did you try playing with multiple characters? I found that I had a lot more fun playing as the brute as opposed to the ninja.

Also, did you play the Gameboy Advance sequel to this? I absolutely loved it, though mostly everyone else hated it. I say it’s worth checking out, though, if you enjoyed this. You can play through the entire game as nearly any character in the game.