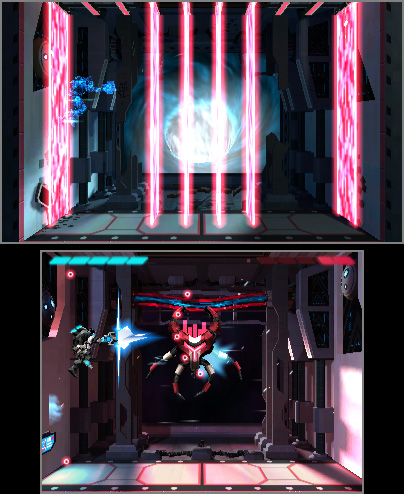 HIGH Playing with the awesome concept in the first few levels is a gas.

LOW Almost throwing my 3DS across the room when in Ragequit Mode.

WTF Who stole'd my story?

Innovation can be rare in games these days. For every Spelunky, there are seven first-person shooter (FPS) games that ask nothing of their audience but pointing and pressing. It's exciting, then, to see games come down the pipe that from their inception are going for something new; products that challenge ingrained gameplay formulas or strip away fatty layers. Endgame Studios' Fractured Soul for the Nintendo 3DS is such a game. Its innovation is in its stellar use of the system's hardware—playing two connected characters simultaneously on both of its system's screens. Frustratingly, the excitement provided by the concept isn't sustained by a game that feels like it's all harsh corners and bottomless pits.

The adventure takes place on an ailing station in the darkest depths of space. The story is simple: the player's character, the Entity, must make it to the exit of every stage while jumping, shooting enemies, and slipping into a parallel dimension to further progress. It's old-school action/platforming goodness that is hard to resist for any long-time gamer. Indeed, the concept is stellar and elicited an instant "No, duh" kind of response from yours truly: "Why hasn't this been done before?!"

As the game progresses, however, the concept's power feels understood, but not fully realized. See, platforming games are as much about their deaths as they are their lives (like Fractured Soul's characters, they're connected). Therefore, the platform game's contract with the player is such: a player's deaths are currency they may exchange for knowledge, thus earning them more thrilling levels or challenges—and ideally, more freedom within the gameplay. Compared to many other platform games, Fractured Soul does not offer the former with enough variety, and it also fails at the latter.

Progress starts simply enough: obstacles such as energy barriers exist in one dimension (or screen) yet not in the other. The player switches dimensions and progresses. The game ramps up from there, throwing in staples such as flooded corridors, wind threats, fire, reverse gravity… These elements work as they're expected to, providing sheerer and sheerer difficulty cliffs as the game move along. What it misses, though, are ways to let that difficulty ebb and flow. Namely, gameplay patterns that let the player forget that the game is getting more challenging. 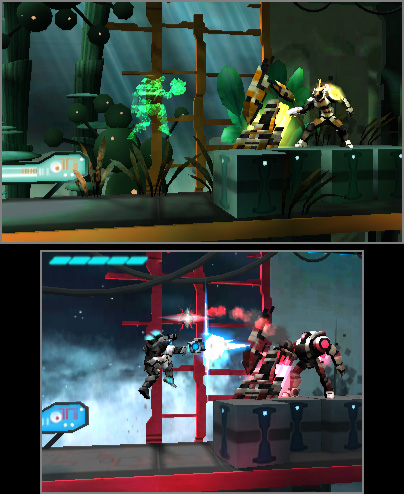 Fractured Soul is a steady and quick uphill climb. For the masochistic, it might be a godsend of a game, yet the average player will not appreciate the game's insistence on barreling forward. This takes us back to this idea of how a standout game can impart a sense of freedom. Within such a game, players are given the tools to manipulate the world, then periodic chances to wield their knowledge against the game's threats. The great ones give us opportunities to revel in this, to soar over travails with newfound ease once we have mastered said skills. Only then, does the game leer at our knowledge and come back with a vengeance. The best games, of course, weave in and out of this structure with little fanfare, imparting great freedom—letting us become the character in these moments.

Fractured Soul's progression is the opposite of this. As the game throws more and more challenge at the player, the stringent difficulties lead to lots of frustration and stunted progress. Any feeling of freedom in the game is squashed by a sense that the player's actions are more and more confined to an exact series of button presses. The feeling is akin to walking through an ever-smaller tunnel, soon crawling on your belly with a mouth full of dirt and claustrophobia closing in. The game's nomenclature doesn't help this fact either, as levels have names like Despair, Torment, and Regret.

Endgame Studios' focus in the game is ultimately the dimension-switching mechanic, which is fine, but players would have been better served if the game could have loosened up a bit in places. Enemy variety and additional weapons would be an easy place to provide the player with a little more sense of power in the world—as it stands, those are pretty basic. There's also a certain smoothness to the game that is lacking in the controls—as if my character were more boxy than I'd like it to be.

To be fair, Endgame Studios throws in some 2D spaceship combat levels to differentiate the action, but they seem to be a distraction from the main idea. I feel as if these free-flying action sequences could be rejiggered into the game's core action, instead of being standalone levels. It would be much more enticing to have the actual character somehow soaring through the air in his levels rather than subverting that energy elsewhere. Bringing this action in-line with the game's main focus would go a long way in differentiating the game's progression, as well as imparting that sense of power and freedom.

On a last side note, the game's story is strangely almost absent entirely. While I'm all for less story in games (I could rant for an hour about how the Halo series gained a story and lost its focus), Fractured Soul doesn't seem to need any story at all. Only one-sentence intros between levels (including the first) give the game anything resembling such. Would it have been so hard to give even a shred of explanation to the proceedings? I love minimalism, but Fractured Soul's story takes it to a new level.

Yes, it's a cheaper, downloadable game and one of the first original projects from fledgling Endgame Studios. They've also been through the wringer trying to get this game to market, but none of these reasons should distract from the fact that it could have used a little more expansion and polish to make it a title worthy of higher recommendation. Fractured Soul is not a bad game by any means, but its keen concept is played out again and again with a taskmaster's sternness, and little else. Rating: 4.0 out of 10.


Disclosures: This game was obtained via publisher and reviewed on the 3DS. Approximately six hours of play was devoted to single-player modes (completed one time).

Parents: According to the ESRB, this game contains fantasy violence. There is very little parents might object to in the game, aside from shooting lasers at robots who explode. Aside from that, there is minimal story, so hardly any content outside of the main game.

Deaf & Hard of Hearing: There is no speech in the game, nor need for subtitles. Additionally, no sound effects affect the game's progress; players can progress based on the game's visuals alone.

Hey there.
We *do* rate games on a x out of 10 scale here (though sometimes I wish we didn’t at all), but the rating remains hidden unless you highlight the white text.

I felt that this game was slightly below average, hence a “4” rating. That doesn’t always jive with Metacritic, etc, as other sites tend to grade on a 5 to 10 scale. Here at GC, a “5” is average, and that’s something that I really get behind.

I came here to read this review from Metacritic, where it is listed as 40%… but after reading the review, it certainly didn’t sound like a 40%. You even say in your comment that you liked the game… has Metacritic got it wrong??

I hear you. Perhaps I should have noted that your mileage may vary with this one. The thing is, I was absolutely intrigued by the premise and the basic gameplay. I really wanted to like this one, for sure. I just found it to be challenging without being rewarding. I like hard games, for sure. As I said, I think SPELUNKY is phenomenal, and that game is stupid hard. SPELUNKY is varied enough to make me want to press on; it’s complex nature was rewarding as I began to understand the workings of it more and more. I actually improved… Read more »

It seems like you wanted this game to be something it’s not. Fractured Soul is about action platforming mixed with dual screen mind-bending challenges. I found it to be a very fun & challenging game, probably took me about 10 hours to complete (i haven’t unlocked all the bonus stages). Kind of reminded me of the NES days, when games were a challenge & your reward for beating a level was to get to the next level. It’s interesting that your review speaks more about what you wish the game was like, instead of what the game actually is. Maybe… Read more »