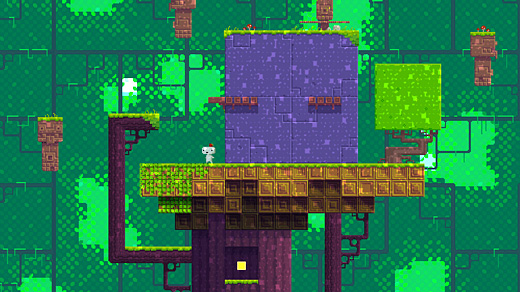 BRANDON stares blankly at the television screen. Coming from it, the music of the video game Fez. On the sofa behind, his GIRLFRIEND stares at her phone. She looks up after a moment.

GIRLFRIEND
(wearily)
What are you do-inggggg?…

BRANDON
(after a beat)
I think I can figure it out.

He looks down at a small notepad in his hand filled with scribbles, arrows, and numbers—a pained look on his face.

BRANDON
I'm pretty sure I can.

His gaze floats downward again towards the page. With an indignant huff, his GIRLFRIEND throws her legs to the floor and leaves the room.

Yes, this scene was taken directly from my life. Certainly any gamer has experienced a version of it at some point. The new puzzle game Fez

put a different spin on the situation, however. My girlfriend didn't just leave me sitting there alone in the room—she left me sitting there with a required companion notebook. See, this long-in-the-making Xbox Live game attempts to force its players to shift their perspectives (both in and out of the game), and with beautiful and tangled logic, it absolutely succeeds.

Fez has been an indie poster-child for some time now, thanks in-part to its five-year development cycle and its beautifully retro style. Since its announcement, I managed to avoid most of what the actual game was comprised of, content enough to see the game's main gimmick play out a few times in an early video. I was sold on the look and concept straight away, so I was very impressed to discover for myself that the game aims not just to use this gimmick as an endlessly repeatable plaything, but to boldly marry the visual ideals to its activity structures. 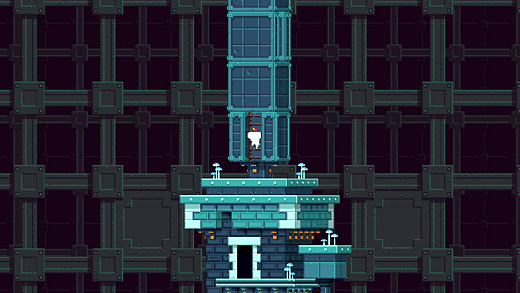 The game begins in a charming 2D platform-filled world that is familiar for any gamer. Our hero, Gomez, is soon visited by an otherworldly guest who tasks him with retrieving knowledge (in the form of collectible cubes) throughout the space and time surrounding his quaint village—yet it also grants him a gift. Gomez gets a fez, see, that allows him to rotate his 2D perspective through his newly realized 3D space, transforming his square life into something more like a cube. While he can never truly escape his 2D plane, he can use the rotation to move through the world with surprising and confounding ease.

Gomez's travels, of course, take him through differently-themed worlds in search said cubes, each gained from solving space-based puzzles. Indeed, most of the game's first tier of puzzle solutions require him to simply navigate to where the objects are hidden. In this exploration, Fez certainly delights. The world-rotation gimmick comes with its own set of rules and further additions to the formula that remain fresh through a great chunk of the game.

It soon becomes clear, however, that there is more at play in the game's expanding world. Where some game developers might perfect this game's world-shifting mechanic, say "Finished product," and call it a day, designer Phil Fish seeks to reflect the game's surface ideas within the actual gameplay itself. It's an idea that I haven't felt manifested so clearly before, and it's done here with some aplomb.

As players progress through the game's world, they'll start to notice that certain background patterns or strange objects begin to take on a life of their own. Before long, these objects collude to present their own set of logic challenges that differ from their purely space-based brethren—and they represent where the game's real puzzles actually lie.

It's a credit to their design that the puzzles are able to reveal themselves over time. They emerge from the woodwork and begin to be demanded as objects. They taunt the player with seemingly random sets of rules. With careful observation, mental repunctuation of clues, and yes, some generous scribbling in a notebook, I'm proud to say that the game's more difficult puzzles may indeed be solved by the lay scholar. Most interesting, however, is the fact that almost every puzzle must be seen in some form before many of them can be solved. The clues to unlocking the game's mysteries are so well doled out by Fish that it's as if the game's newly "cubed" world takes on the motion of a slowly expanding spiral.

This is not to say that the game's puzzles offer a smooth mountain of difficulty—oh no. It's a well-designed game, to be sure, but the walls of logic one comes up against are massive ones, indeed. Players who go all the way with Fez will be expected to decipher not only motion codes relating to the controller, but also alien counting and writing systems. The payoff, when following the game's graceful logic, can lead to some phenomenal "a-ha" moments.

Here, of course, is where user mileage may vary.

As in any good puzzle game, the player must spend a fair amount of time in thought, and not in play. I've quit my share of puzzlers, and Fez can certainly be frustrating, but it's not without its charm. I was tempted many times to go online and get instant access to answers, but I was so glad I didn't (at least aside from the game's final three "extra" puzzles). The logic breakthroughs in Fez can be their own rewards. Here, though, is where I should say that the game can also frustrate on two levels. 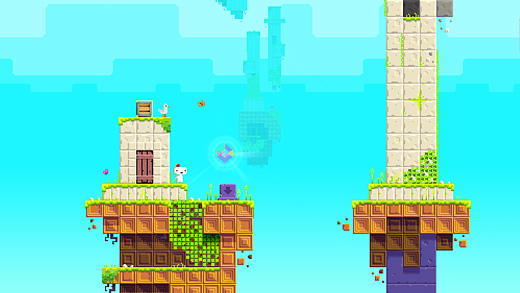 First, a very base one: backtracking. The amount of traversing of the same areas in the second half of the game may put off some—be it on a blind search for clues, or to just simply get back to certain areas. There are warp systems for getting around quickly, but players will get tired of puttering back and forth when they come to logic standstills.

Second, on a grander level: at game's end, Fez is either too smart or too deliberately misleading for its own good. The final three "extra" puzzles of the game are downright EPIC, and I was not interested or able to complete them in any way before I sat down to write this piece. After investigating the solutions, I feel that two of said puzzles may have taken me years to figure out on my own; that I've made peace with.

The game's "final" monolith puzzle, however, gives me pause. As of this writing, its solution has not been logically solved. Yes, the answer was discovered with a few insider clues and one man inputting 1,300 codes by hand, but no one can seem to make sense of how to come to that code—the answer to which should appear on an in-game treasure map that is unfortunately burned away. What's more, nothing changes when all three extra puzzles are solved. The game's ending does not change, nor is anything further revealed. Might the answer really be buried somewhere in a trail of digital breadcrumbs, or is this final puzzle a part of the game's theme—one of infinite, unknowable answers that sees us as tiny specks in a sea of information? Does it exist only to taunt?

In any case, Fez

is remarkable puzzle game that practices what it preaches. My hat is off to Mr. Fish for attempting a project that seeks to offer carefully-planned evolutionary gameplay that expands alongside the world it portrays. Throw in playful retro graphics, fantastic sound design and music, and one of the best game endings in recent memory, and it becomes an experience not to miss. Though it may not flow as smoothly and simply as something like the recent Journey, Fez is a straight-up, forward-thinking shot of puzzle gaming goodness.

The GIRLFRIEND opens the front door, entering. BRANDON, wrapped in a blanket, holding Xbox controller and his notebook rises quickly to his feet—a wild look in his eyes.

BRANDON
I figured it out! I made a BREAKTHROUGH!

GIRLFRIEND
What is it, babe!? In your life? Your career?!

BRANDON
In FEZ! I figured out the counting system!!

There is a slight pause as the GIRLFRIEND considers what she's heard. She scowls for a brief moment, staring at BRANDON. Her scowl softens, then becomes a small smile. They embrace.


Disclosures: This game was obtained via publisher and reviewed on the Xbox 360. Approximately 16 hours of play were devoted to single-player modes (completed two times).

Parents: According to the ESRB, this game contains mild fantasy violence. Parents needn't worry about terrible violence, as the only bad things involve the main character falling from too great a height, which he readily brushes off. Parents should only truly worry about whether their child can handle Fez's intense mind-benders.

Deaf & Hard of Hearing: There is at least one motion contraption that uses sound to indicate the disappearance of "grab-able" climbing surfaces. There is also a visual element to it, but it can be obscured by the world. Additionally, there is one segment where ledges disappear and reappear to the the beat of the music. This area might cause real concern for the hard of hearing, but since it sticks to the beat, it can be memorized.