I am just a person.

Here is what there is to report. 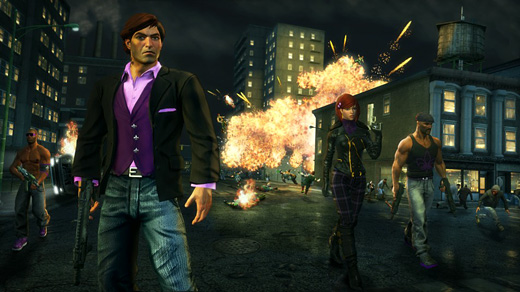 On approach to the Convention Center, it was noticed by X (heretofore known as Mr. Gray Matters [his request]) and I that Saint's Row: The Third had rented out a parking lot across the street where they were not only offering free parking, but free car washes, as well.  Who was proclaiming all of this?  Why girls in bikini tops and spandex booty shorts, that's who.

You got sad in my hotness…

Upon nearing the Media Registration Center, Mr. Gray Matters remarks, "You can tell we're near the Media Center from the overwhelming smell of sweat."

We walked to the Bethesda booth as the doors opened and were promptly told that we could make an appointment for a meeting, but they'd only allow one person from each media outlet. Boo.

Saw a really short line for the Twisted Metal demo.  Excellent.  Unsure about the series' transition, annnnnnd, pleasantly surprised.  Aside from the flummoxing amount of commands, a fun time.  Some nice game modes were on display.  This game will do well, methinks.  Exchanged some nice words with David Jaffe.  A fine start to the day.

Was magnetically drawn to the Dark Souls demo at the Sony booth.  How couldn't I be?  It took me right back to the good stuff.  It's too bad, of course, I had to play this game in such a kooky atmosphere, as you really need time and space for this one to sink in.  I was still enthralled, however.  Nothing too new was on display here, minus a few streamlined features for your in-game menu items.  I would have stayed here all day if I could. 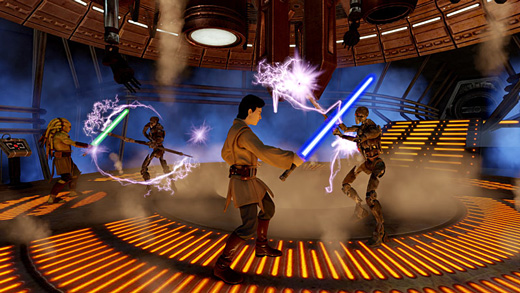 Got some hands-on time with Kinect: Star Wars.  First impression: why does it have to be Episodes 1-3?  Soon, it doesn't really matter.  Pretend to be a semi-laggy Jedi.  Not bad, certainly, but still "Kinect-y".  "Wii-y."  Sill-y.  Mostly serviceable, but odd flailing.

Next was The Gunstringer. It's the first Kinect game I've played that is any good, and this is for real.  Kinect is fine, but all of the games I've played for it so far have been any good because I (and I'm guessing most people) have wanted them to be good.  I mean that just like the Wii before it, most people are flailing their hands around, and they're looking over at their friend who's playing Wii Leaf Raking with them, and they're going "Please say this feels like real leaf raking to you, right?," but inside their heads.  And they're doing this goofy smile.  And their friends are thinking, "This is some bullshit, but I guess I only look as stupid as this guy next to me.  Ha; at least they're my friend…"  Well, here's the first Kinect game that was made to do something imaginative, something not just a mimicry.  Every Kinect owner should be looking forward to The Gunstringer.  You play an undead marionette in a stage play who shoots bad guys!  It's stylish, different, original, and FUN. 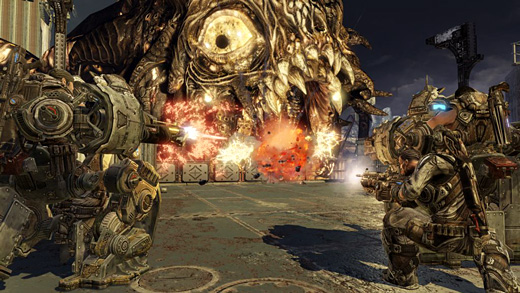 Gears of War 3 has this Beast Mode thing that is actually really cool.  Next, we were treated to a multiplayer session of this shit, and it was great.  We were the beast-y team, and it's about two competing teams duking it out over territory.  One team is human (COG), one horrible, horrible Locust creatures (including the option of a nasty centipede-like dealybop).  It was more fun that I would have given them credit for, being not the biggest Gears fan.  Good job, Epic: you're giving us some good multi stuff here.  Lord knows if I can stomach another "Arr-arr, Raaaaa" campaign, but I might as well give it a shot…

First of all, is it fair to use a game's name just because it has guns and the occasional Mexican when the new one takes place one hundred years later?  I don't really think so, but that's Call of Juarez: The Cartel.  I guess in this day and age, you can't even be trusted to say, "Hey, I did that other thing!  And now, this different one!"  Nope.  It's akin to "Titanic: Avatar," if you ask me.  Despite this, the game seems to be alright.  A truly cooperative multiplayer title that gets a fair amount right, it's got a lot going for it.  You and your teammates have different specialties, and you can do certain things to trump your fellow man.  In fact, the nice Ubisoft fellow said that they preferred the term "co-petitive."  No joke.  This one is alright, for sure.  I DID like the leaning out the window while X's friend drove.

My day ended on a sweet note (natch) checking out Ubi's Rocksmith.  I don't play guitar, but I certainly felt like I might be able to learn fairly easily with this game.  If you haven't heard, the game comes with a cord you can plug into ANY guitar – then, you jam with the game.  ANY guitar.  That's pretty great.  While it certainly wont be a party game for the masses, my limited time with it assures me that pretty much anyone interested in the guitar would get something out of playing the game.

Day Two is coming.  Mr. Gray Matters is asleep on my sofa.  More Dark Souls awaits me tomorrow.  And Catherine.  Oh.  Oh.  How I wish there was more time.  Time.  E3 is a vortex.