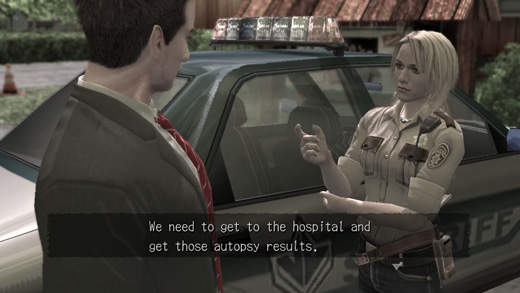 WTF "Let's charge for DLC when the game is almost exactly the same!"

In case you were left with any questions after reading Dan's primary review of Deadly Premonition: The Director's Cut

, allow me to reiterate one thing and clarify another:

Deadly Premonition is a great game.

Deadly Premonition: The Director's Cut is… not quite a great game.

See, Dan is exactly right in his assessment of Hidetaka Suehiro's 2010 gem: it's fantastic.  It's an absolutely unforgettable experience for anyone who's willing to overlook a boatload of technical and production-value shortcomings. Succinctly: he may be one of the most interesting kids at school, but if Deadly Premonition walked into the Big Boy Games' locker room, he'd get himself wedgied.

Here's where Dan and I differ on this new version, though: it really doesn't matter which one you play.

At it's core, The Director's Cut is the same lovably scruffy dog as the original. Same gonzo story (mostly), same great characters, same bursting-with-love heart in its chest. Speaking as a huge fan of the game, what really matters most is that one plays the game at all, even if it is a lesser version.

And yes, somehow, as Dan said, The Director's Cut is a lesser version.

Hilariously, it's the addition that makes it so. The tacked-on framing story is a completely unnecessary bit of fan-service that would be welcomed if it had anything to do with the game's "present" narrative. The choice to place it in the future, so that the main game becomes a bedtime story only serves to deflate the story's tension.

Where Dan and I differ is how much the new version sullies the original's name. 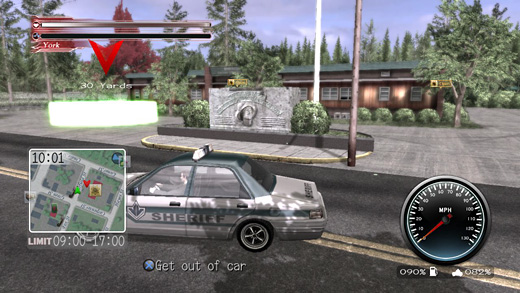 Unlike Dan, I could never escape completely into the world of Greenvale. While I was ultimately blown away by the cumulative experience of guiding amazing characters to an unbelievable conclusion, I did so while constantly aware of the terrible combat, the awkward driving, and the (mostly) stilted acting. I would compare the experience of playing it to watching a film on a loud television that's sitting behind a dusty shop window. It's a gripping tale, but it hardly escapes its physical chains.

Because of these constant reminders of the original's shortcomings, The Director's Cut's near-complete refusal to patch up its broken systems is less of an annoyance for me. My enjoyment of the game in spite of these elements during my first play-through remained during my second, as well.

Perhaps the real crime is in the game's label. Had it simply been a PlayStation port (even with the admittedly unneeded new scene) without the misleading "The Director's Cut" slapped onto it, it'd be slightly forgivable. Consider, as well, what a real director's cut might have been.

Creator/Director Hidetaka-san (Swery) has noted that the game was not meant to have combat at all when it was first conceived. To play that game—one without one of its most irritating features—would be an immense treat for fans. During the press trip for this game, however, Swery admitted that this type of major re-jiggering would have cost gobs of time and money that Access Games simply doesn't have. It's just too bad that it wasn't a basic port.

Though the core experience wasn't ruined for me as it was for Dan, I must also admit that it's a further knock to fans of the original that publisher Rising Star Games has released DLC for The Director's Cut

since its release. This content is mostly cosmetic in nature, yet it's still ridiculous that these extra bits (that cost extra money) couldn't have been included in the game, considering how little it differs from the Xbox release.

With all this said, what's most important is that this game gets played.

For adventurous gamers who may only own a PS3, it's better for them to get this game than not play it at all. Deadly Premonition is incredibly special—a title which I am happy to claim as one of my all-time favorites. While this release misses the mark in its intentions, it's still the only way for a certain segment of the gaming population to experience its gonzo grandeur.

A parched man emerging from the desert may prefer a glass of water over a cup of hot coffee, but if it's all we got, give him the coffee we must. Rating: 7.0 out of 10.

Disclosures: This game was obtained via publisher and reviewed on the PS3. Approximately 25 hours of play were devoted to single-player modes (completed one time).