We were Promised Jetpacks 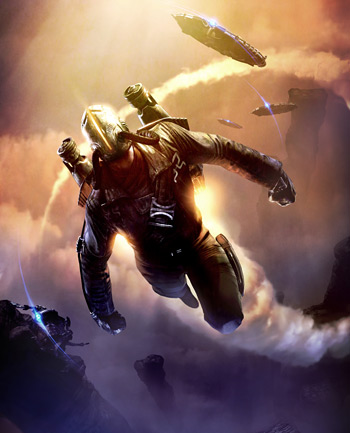 WTF  The aliens are robots and slugs and shape-shifting human-creators?

We were promised jetpacks. As a society. It's an idea as old as time, and you can read about it in old issues of Popular Mechanics magazine. There it is, clear as day. And where'd they get their proof? Well, the Bible, to be precise. There it is at the beginning of the Book of Revelation: "Yet before the destruction of Man was to fall, the Lord said to Man, "Zoom around willy-nilly; childhood dreams now incarnate, packs of rockets on your backs." See? So, then comes this company Airtight Games, who's gonna make it all come true for us—at least, in the digital sense. So, they team up with this mega-publisher called Capcom, and they set out to give us The Jetpack Game! Wait, ok: it's called Dark Void. Sigh; had it actually been called The Jetpack Game, I think it probably would have been ten times better. As it stands, instead of giving everyone the game to make our deep-seated techno-fancies come true, Dark Void rockets its way into the low-slung ceiling of mediocrity.

Telling the story of one dashing ne'er-do-well, Will Gray, Dark Void opens onto a romantic 1930's vision of a Florida airstrip, where Will is about to pilot a strange trip to the South Seas with a surprise guest, his ex-flame. Soon Will and gal-pal Ava have crashed their plane somewhere inside of the Bermuda Triangle, where an alternate dimension holds aliens, ancient civilizations, and yes, jetpacks! Frothy stuff, indeed! These elements should combine to take the average gamer through an exciting romp featuring jetpacks (!), but aside from the initial potential so inherent in the idea—which is allowed to shine in brief moments—the game fails again and again to dole out the satisfaction found in most of today's top-tier titles.

We come to Dark Void for the zooming, and the Prologue gives it to us, but in a short context-less air battle fought by a faceless hero that ostensibly introduces what will come. After this odd intro, the story of the game (featuring the actual hero) begins to unfold, and the ground combat elements are introduced. Imagine Gears of War, and you'll understand how the game works. No real surprises here; the player carries two guns, can pick up the enemy's weapons, can take cover behind low walls, etc., and regains health when out of harm's way for a moment or two. Pretty standard stuff. (The only real addition to this sort of combat is the ability to "burn" grenades by holding them after pulling the pin. It was actually thrilling to time the throws just right to take out groups of enemies—but this is one of the few bright spots.) We're left with this, though, as the developers chose to hold off in giving out the jetpack for the game's initial few hours. That's a big mistake, considering that the ground combat brings nothing new to the table.

Next, one of the game's touted new features is the "vertical cover system." This constitutes a large portion of the early game, and however intriguing on paper, it's almost used too much. See, Will can use his 'pack to scale large portions of walls, essentially turning the world on its side and offering a neat perspective on the now-classic Gears of War cover system. While it works well, there's not too much to differentiate itself from the ground combat, other than the fact that you can really spam the melee attacks in this mode to soar through these sections. 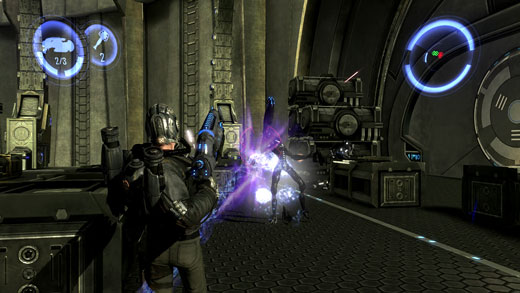 So, how about that bleeping jetpack! For a game sold on this feature, and hyped for two years now, there's no gentle way to say it: Dark Void fails to make jetpack-fantasy a reality. It simply never quite offers us the arsenal we demand. Versus humanoids, most would want to be able to do crazy acrobatics and maneuvers—Dark Void merely lets us hover around our adversaries. Next to planes we would at least want to feel like we had some kooky techniques that could blow things out of the air with speed or firepower—Dark Void only allows us to slowly pick things out of the sky with the 'pack's manual-aim cannons, or hijack alien ships with a canned minigame which plays out exactly the same every time. We want to feel powerful with this awesome tool, and the game avoids giving us this power. Seriously, it took my character manning a stationary anti-aircraft gun to feel truly powerful for the first time. I could think of dozens of other things I'd wanna do on a jetpack. How about some super-speed attack that bowls into enemies or rips through rival aircraft? What about segments requiring precision flying through treacherous canyons? Or even timed segments requiring you to get from one place to the next under daunting circumstances? What about actually playing the part of rescuing your free falling girlfriend, as opposed to just watching it in a cut-scene?

Compounding the base complaints, the game is clearly delineated into indoor and outdoor areas, which does a huge disservice to the game's main selling point. If you're going to make me fight indoors, why not make the indoor areas large enough (or my 'pack slow enough) to allow me to use it indoors—zipping from one place to the next, or letting me use my jets to attack someone with brutal speed? The outdoor segments, where we could get a bit more excitement from all of the inevitable flying, treat Will as a plane—a plane with guns smaller than what the competition has. Ultimately, the ability to use your 'pack when and how you want would have made all of the difference in this game. Don't let me "really" use it only during certain segments.

It seems as if Airtight and Capcom had some great ideas at the top, and then could not agree on how to expand on them. As it stands, it seems that much, much work went into "crafting" the game's story (to quote the press packet), while making sure to include lots of superstar voice acting, plot points, and orchestral music. Bit o' news, guys: I can serve you a Whopper Jr. on some fine china, but it's still a Whopper Jr. See, in games, less is definitely more. I feel that the storytelling ability of what is currently known as a video game is directly correlated to the player's actions. Nothing will ever serve to engage the player as much as the actions that they take while their fingers are moving over the controls. (See any narrative game from developer Valve for that proof.) Plots can be as intricate as you want them to be, but unless the player actually touches these plots, they don't mean a thing. We're meant to take from all the surrounding racket that the strange Void is run by aliens who are robots but also slugs, but also shapeshifters…. who are bent on world domination that…..and then….and there's Nikola Tesla, and ….and what?! And why am I so confounded when all of the main characters are nonplussed by all of the kooky stuff happening all around them? They just pick up guns and start shooting robots, no questions asked…

To sum up the game, take a typical indoor battle in Dark Void. Will is surrounded by robot-alien-slime-shape-shifting thingies, and needs a quick escape. "UP!" he shouts to the jetpack companion snuggled firmly on his back. He powers-on the engines, freedom waiting just above. The throttle kicks in, pulling his feet off the ground, while quickly and simultaneously crushing his head into the ceiling… After two years of wishing for a zippy, noir-ish thrill ride, and mind you, being promised that by all of the hype—we only get a stingy game that traffics in potential and nothing more. Rating: 3.0 out of 10.

Disclosures: This game was obtained via publisher and reviewed on the PS3. Approximately 11 hours of play was devoted to single-player modes (completed one time).

I read this review, played the game, and was ready to disagree all over the place with you. But then I played more of the game, and finished the game, and aside from final score (which is meaningless, I know, but I think the game is at least average). I have to say you pretty much hit the nail on the head in every regard.