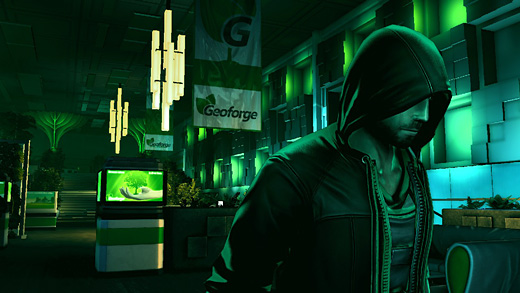 I recently had the opportunity to play a new action game featuring said creatures, and sadly, it only managed to convince me that it was the last of those things.

from Germany's Realmforge (and publisher Kalypso) is an upcoming stealth-action game featuring the world's most attractive, desirable monsters. Players take on the role of Eric, a handsome and newly-fanged member of his city's bloodsucking tribe. When Eric awakens with two brand-new teeth in his mouth, he's confused, angry, and distressingly thirsty for blood. Soon he meets the beautiful local vampire leader, Rose, in the city's hottest dance club, and it's quickly clear he's gonna have to puncture some necks to figure out how exactly he got himself into all of this. 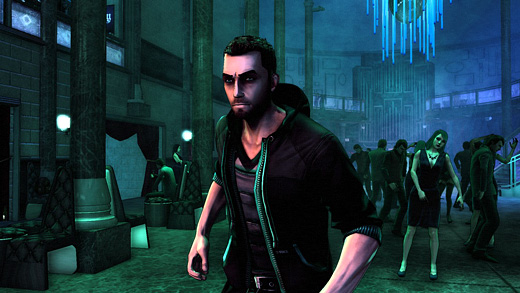 If the dance club or any part of this premise seems a bit B-movie, the designers can at least be credited for trying something different with their gameplay. Unlike most third-person actions games that rely heavily on firearm-based combat, Dark strides semi-confidently away from those tropes. Main character Eric will combat legions of special operatives on his quest for truth armed only with his fangs, fists, and a smattering of special vampire skills.

This focus on stealth is the game's absolute selling point. Players will have to find their homes in the shadows, lingering to watch enemy motions and patterns, teleporting between cover when necessary. Avoiding sightlines becomes the game's core activity, and the developers have included various special maneuvers to assist the player in their tasks. Drag bodies around corners, move with super-speed, distract or confuse guards with the mind, grab enemies from the shadows and disappear again… 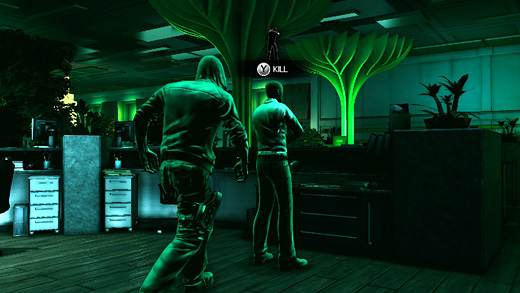 Dark has a commendable list of special abilities in this, its alpha stage. Ultimately, however, its hardline stealth focus does everything to restrict its potential audience to stealth-gaming aficionados only. While other games that invoke the genre—the Metal Gear Solid, Splinter Cell, and Hitman series, or the recent Dishonored—have given players systems that rely to some degree on the idea, Dark forces players into such tactics exclusively. While there's nothing wrong with such a goal, what gets left behind is a certain player agency during the proceedings.

The demo shown at the preview event left this writer and other attendees feeling restricted in the choices they had for dispatching the glut of unaware enemy troops. This is especially true when all those unawares became hostile. Indeed, the extreme stealth focus simply robs its players of any contingency plan when escaping (minus hightailing it to the shadows). Despite the presence of Eric's vampire powers, my dozens of attempts at besting the game's first two non-tutorial demo levels ended time and again in bungled attempts to awkwardly scoot away from dangerous encounters. While the purist focus on stealth is commendable, most stealth games do give their players satisfying last-resort options such as firearms and the like. 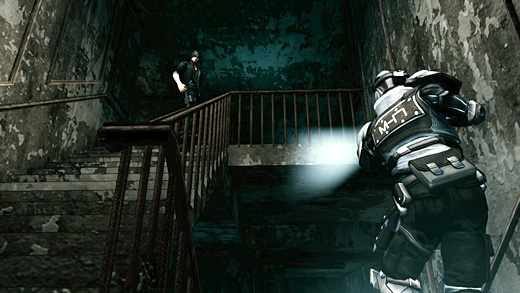 In fact, there are literally no available weapons in the game at all. No guns, no blades, no crazy magic energy bolts… Combat even only exists as quick-kill animations. When I asked the game's rep if there was any narrative justification for Eric's abhorrence of any possible tools of destruction, he answered "no" and simply said that Realmforge doesn't want weapons in the game. They'd rather simply focus the game on stealth, he added.

While I'm all for a singular vision in design, Dark simply left me feeling like the game needs to bring a good deal more to the table before it catches the eye of Joe Gamer. Perhaps some of Rocksteady's Arkham Asylum-type flavors could be thrown into the mix—adventures into the Z-axis, for one, or maybe even a basic combat engine to fall back on when the sneaking fails. 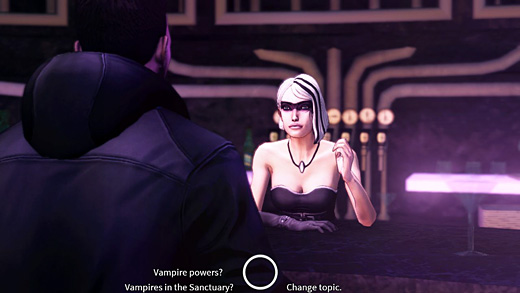 I'll freely admit that I'm no stealth game superfan, but it's difficult to see what the game is aiming for at this time. My great thanks go out to Kalypso and Realmforge for the opportunity to travel and see the game, but at this stage, Dark is missing the litheness and the power of the vampire.