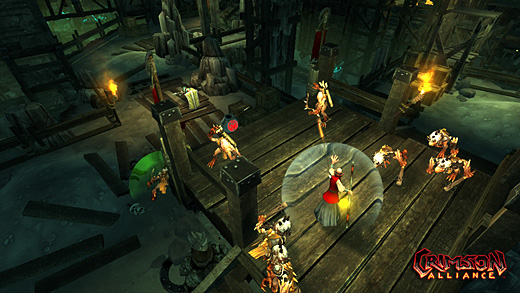 HIGH This one's not only girlfriend-friendly, she also outscored me on a number of levels. I was so proud.

LOW Paying for a "free" game is confusing.

As a dungeon-crawling actioner lacking the big-time window dressing we've come to expect, it might be easy to hate Crimson Alliance

for everything it's not. On the other hand, it might be easy to love for the same reason: join a party of friends and press buttons to smash monsters. What more do you need? Love it or hate it, Crimson Alliance will amaze in its ability to scratch a certain itch, yet evaporate from memory before you can say thank you.

Truly, games of this generation don't get much simpler than this. Players take on the role of one of three selectable characters, then press through a dozen barely-labyrinthine levels while increasingly foreboding monsters present themselves for extermination. Along the way, they find secret areas off of the beaten path and upgrade their weapons and armor. It's hack and slash to the very core, and it's certainly functional. Hack, slash, repeat.

For what it's worth, the game works. It's hard to find fault in something so single-minded, and Crimson Alliance is easy to pick up and play. It's divvied-up into compact levels and the occasional shop. Its combat is essentially limited to the characters' three main actions—all various combos of strikes, stuns, and ranged attacks—with the obligatory sub-weapon pick-ups, and of course, an unlockable super-move. They nailed the action game functionality there. If this were a meal, you wouldn't need instructions on how to eat it.

My girlfriend and I enjoyed ourselves to a fine degree trudging through the hordes of undead overrunning the Kingdom of Byzan. My girlfriend's not even the biggest gamer, yet she was able to join in and exterminate with the best of ‘em. Kudos to developer Certain Affinity for getting that part right. Unfortunately for the gaming gourmands of the world, the main course of the game is never served up since many of the action-RPG staples found in its contemporaries are just plain absent here. There are no skill trees, no experience points, no magic bars, no huge bosses, no selling of excess inventory (?!) It all ends up a bit repetitive and disappointing. The game eventually feels like a long procession of similar enemies in similar battles. Swarm of goblins, stun, smack, dash.

Great RPG elements can act as the glue that holds a somewhat shaky project together, but there's very little mucilage here. What we have in Crimson Alliance is a modern rendition of an arcade brawler like Gauntlet. Aside from picking a new character or buying new weapons or armor that slightly modify the main actions, RPG elements here exist primarily in tone only. I was left wanting more options and choices, and while the lack of RPG options is somewhat confusing, the real head-scratcher here is how the game gets its money from the audience.

One questionable financial tactic is the way Crimson Alliance baldly offers its in-game gold in exchange for real world dollars, thereby nullifying the sweet success of saving up for that special sword. More significantly, the game is sold as "free" over the Xbox Live Marketplace, but it's really just a trial.  Players get access to the first level only, then to advance they must pay $10 for their favorite character class, or $15 for all three.

I'm not sure how all of this was decided, but this pricing structure sends a weird message to would-be fans of the game. It's hard to imagine a marginally interested gamer making the "economical choice" by choosing to plunk down two-thirds of the cost of the FULL GAME to get one-third of its content… It suggests a lack of confidence in the product, a weird marketing experiment, a deliberate attempt to hornswoggle dubious consumers—or all of the above.

While girlfriend-friendly and action-ready, Crimson Alliance

needs some beefing up to be a memorable experience. Booting up the similar Torchlight for just a few minutes is enough to show that while simple is good, elegant is better. Rating: 4.0 out of 10.


Disclosures: This game was obtained via publisher and reviewed on the Xbox 360. Approximately 2 hours of play were devoted to single-player mode and 8 hours of play in multiplayer modes. The game was completed once.

Parents: According to the ESRB, this game contains violence, blood, and partial nudity. The violence is pretty standard dungeon-crawling fare, with nothing too excessive, including gratuitous blood. The partial nudity is relegated to a cut-scene and boils down to a shot of cleavage.

Deaf & Hard of Hearing: All of the cutscenes are fully subtitled, so there's no fear in missing out on any of the story. Certain monsters in the game will be harder to defeat, however, as specific audio clues will alert you to their presence.