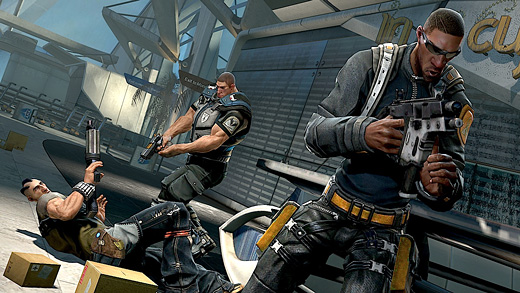 HIGH Seeing the credits roll came as a nice relief.

LOW Certain game-types can last fifteen agonizing minutes, regardless of the win conditions.

In this day and age, first-person shooters litter the landscape like so much overripe fruit. While not every piece can be a delicious treat, one truly hates to discover a slightly spoiled interloper, especially knowing how much work it takes to bring it to market. Brink

is one such game. Somewhere along the production line something went wrong in development, and the results lead to one sadly generic firefight.

Make no mistake, Brink works just fine.  Two opposing forces square off on the battlefield, blasting each other with a variety of guns while fulfilling various genre-standard gaming tropes: escort something, defend something, annihilate something, etc.  As a member of the Security or Resistance forces, you'll fight pitched battles for dominance of The Ark, a dying future-city once built to become a thriving utopia, and do so solely via multiplayer matches.  All in all, it works as well as any FPS would be expected to in this day and age….but that's about it.

Mediocrity is not something that sells games, of course, and the few hooks meant to set Brink apart from the rest are present: first, a striking visual aesthetic. Second, the inclusion of parkour (or free-running) into the player's moveset.  While initially intriguing, these elements seemed to be diminished in the end to make room for the standard mechanics of a multiplayer shooter—mechanics we've seen many times before.

It starts to go wrong the minute the game's story gets going. The Ark, a city built to house millions after global catastrophe has flooded most of the Earth, is being ripped apart by the civil strife between those keeping order and those wanting to leave in search of dry land. (Maybe no one watched Waterworld however many years ago?..) The interesting setup, however, would lead players to think that they might be getting into an epic tale of passion, reaction, and revenge!  The nature of the type of game that Splash Damage and Bethesda have made, however, is at complete odds with this idea. 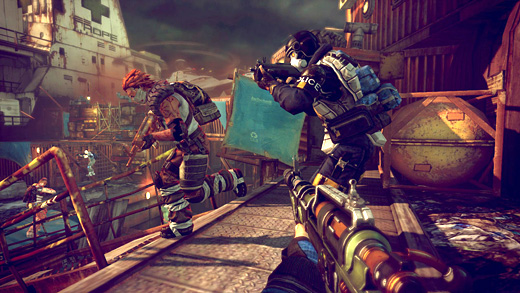 There is no traditional "single-player" component of Brink, and that's fine—it's just that a string of deathmatches makes it nigh-impossible to tell a cohesive story. They tried, bizarrely, with cinematics that bookend each mission, but these story bits are incomprehensible at best and downright silly at worst, little more than so many dudes yelling at each other about revenge and freedom. Couple this with the fact that both sides are meant to be morally equal, and the potential for a varying storyline disappears. Seriously, just giving this game a story was worse than giving it none. A simple narrative backdrop would have made it so much easier to polish the game's finer points that i mentioned earlier. These finer points, however, are bungled all the same.

I was initially drawn to the game's catchy visual style; its heroes are lanky, hyper-extended, and almost cartoony.  This was done perhaps to provide a visual coupling with the parkour elements of the game. As stated before, however, a striking style means bupkis when all the characters become interchangeable, shouty soliloquizers. Oh yeah, where are all the women, for that matter?

So, what about the parkour—debatably the game's biggest selling point? I'm sad to say that its use never feels like a real game-changer. While it works in ways similar to Ubisoft's Mirror's Edge (a game from which it borrows a few style points as well), the urban movement fails to make itself an essential part of play. Players can use it to get from one place to the next, or to scale obstacles for a slight advantage, but the nature of Brink never lends itself to hasty getaways or climbing high above the field to achieve certain objectives. You've got guns to shoot; parkour only ever registers as an afterthought. Honestly, it just doesn't mesh well to this type of structure. The thrills of free-running are more in line with stealth and adventure than they are with unloading machine guns and explosives on the way to victory.

Though the game fails to capitalize on its main conventions, the shooting here works reasonably well.  Players will have a variety of guns to choose from, though most aren't too dissimilar.  Experience points will earn players new weapons and options based on their favorites of the game's four classes. There are dozens of upgrades for each class, spanning FPS conventions such as quicker reload times, extra health, or different grenade types. In effect, upgrading the different classes ends up being the real selling point of the game, and gamers who dig these sorts of upgrade-potential will get the most out of Brink. It struck me as pretty hollow, however, to see countless unlocks awaiting the player while the basic game mechanics offered so few compelling twists on old formulas.  It boils down to something like a big FPS piñata cracked open and spilled onto the floor.

Speaking of old formulas, the two main games that Brink

borrows from, Team Fortress 2 and Mirror's Edge are both superior efforts. While one may find more human players Brinking it than playing Team Fortress 2 when booting up their 360 or PS3, they won't find the same level of variety or polish.  And while there's a lot more shooting in Brink than in Mirror's Edge, there's certainly less thrills and pacing. Brink works fine, yes, and can deliver a competent multiplayer game of shoot-shoot, but as a full-priced retail title it leaves a lot to be desired. A simple, story-less downloadable game would have made much more sense. Of course in that case, there'd be a lot less voiceover shouting… Rating: 4.0 out of 10.


Disclosures: This game was obtained via publisher and reviewed on the Xbox 360. Approximately twelve hours of play was devoted to the single and multiplayer modes, though they are the same.

Parents: According to the ESRB, this game contains: blood, language and violence. There's nothing too grisly for parents to be concerned about here.  Standard depictions of shooting deaths occur time and again, but it's nothing out of the gaming ordinary.

Deaf & Hard of Hearing: You are completely out of luck with this one since the game features absolutely zero subtitles. There's not too much that would really be missed from the threadbare story, but it's a pretty glaring omission considering the MASSIVE introductory tutorial shares a wealth of vital information through audio only. In addition, many in-game dialog lines refer to actions taking place in-game, so those would also be missed. The complete lack of subtitles is pretty shameful.

As a whole, I think Brink does indeed lack deepness when it comes to the parkour. Climbing (higher then a maximum of 2 jumps in light body) should have existed to make it WAY less linear. I mean many path are a must to move faster, yet does not frequently make a massive change in a game. Due to this fact, it’s not surprising to always see a turret at the same spot, mines at the same choke points etc. I absolutly love this game and I highly disagree with the lack of clarity of the story. I even find… Read more »

Having played the game on PC, here are some sights & sounds from a PC perspective and keeping in mind that Brink is a game I wanted to love so much. [Pre-ordered on Steam. How I wish I haven’t.] 1. Unfinished/broken/unpolished game. 2. Serious issue/incompatibility/unoptimized with ATI Cards. (How could this happen in 2011?) (FYI, I own a 5870 HD) 3. Patches/ATI Hot fixes/Anything => Game still suffers considerably when it comes to frame rates, having sharp FPS decreases and increases for no reason. Engine feels unfinished. (Mind you the system running it played Crysis 2 & Bulletstorm at 1080p… Read more »

Li-Ion, I agree with you regarding the state of certain multiplayer shooter player behaviors – nothing is worse than being owned and getting shit for it. Brink is friendlier in that sense, for sure. I feel, though, that it might be more abusive in Brink were the game simply more appealing to the average shooter player. I’m guessing that the more people flock to a game, the higher the asshole potential. It’s also certainly true in Brink that individual stats take a backseat to the team’s overall victory, which is indeed nice. I can’t remember, however, if you can even… Read more »

Well, I completely disagree with this review. After playing Brink I feel that my movement is awfully restricted in other men-with-gun-games. It’s no mirrors edge 2, of course, but the parcour element works fine, but does not try to steal the show. Everything I hate about other online men-with-gun-games is not an issue here. When I play Call of Duty I get destroyed within milliseconds by children questioning my sexuality. In Brink I’m still no FPS-god but can do something useful for my team and what I did in the singleplayer is not invalid in the online world. I like… Read more »