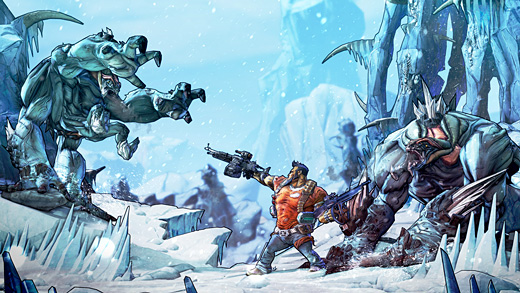 HIGH Mopping up a roomful of baddies with a buddy in short order makes you giddy.

WTF Me: "Did we just murder the Ninja Turtles?"

Laverne and Shirley. Peanut butter and chocolate. First-person shooter (FPS) and role-playing game (RPG). This is how Gearbox Software is hoping the history books look in a few years—thanks, of course, to the generous gifts of its Borderlands game series. Can it be so?  Might these two ubiquitous gaming flavors really be that sort of dynamic combination? After two significant at-bats for the Texas developer, the answer is a solid… kinda-sorta.

Before we dive in fully, this reviewer must make a full disclosure: I quit the first Borderlands midstream. Yep. It always hurts to make such decisions and declarations, but it's true.

I found the first game in this series to be a dry, overly linear single-player experience and a slightly more engaging, yet mindless multiplayer one. Aside from the game's bold cel-shaded visual style, I felt it was a long exercise in repetitious run-n-gun. This was despite, of course, the game's can't-miss central conceit: throw two seemingly unrelated genres in a digital blender, add some primary colors and loot, and whip ‘til frothy. …And somehow, that was boring. Now, the same conceit has been brought over to the sequel with a bit of streamlining and retooling; and though it's still generally plagued by the same core issues, it thankfully leads to some more entertaining results.

So, what's new this time around? Returning Vault Hunters will first be greeted by the game's four new character classes (not counting the DLC classes) that are either brand-new or slight re-imaginings of the last game's core four. While there's unfortunately nothing special to differentiate them all in the game's first couple of hours, their class-specific skill trees (once unlocked) are the most obvious upgrade to the game's systems.

Where before there was a little choice in how a player concocted their particular brand of character, Gearbox did their best to blow it out here. Each character's special action skill comes with upgrade options galore—each one usually altering (at least) two separate character stats with each new level gained. 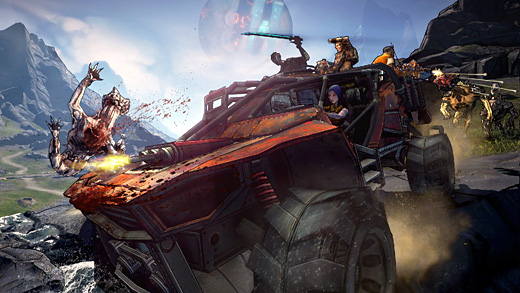 Further customization has also been optimized by removing a lot of class-specific gun bonuses that the first game relied on. While a few of these gun-specific skills remain, most have been done away with, so players can use any guns they want. All of the choices and the leveling-up of said skills are enticing and certainly the best facet of the RPG elements that the game offers. Does one choose stealth?  Support? These options offer their players a chance to create exactly the sort of character they prefer…

…as long as that character chooses to shoot lots and lots of dudes and not do much else. Yep, that hasn't changed: Borderlands 2 is a shooter, plain and simple. Missions vary slightly, be they story-related or optional; go and shoot the objective or go shoot things on the way to the objective. In fairness, a few glances at the game will steer a player away from expecting otherwise, and that's fine— that's exactly what Gearbox intended.

So, does it make for compelling gaming?! As a multiplayer game, yes; with friends, one could do a lot worse than Borderlands 2. When a good group gets together, guns all pointing the same direction, different skills popping off, elemental weapons burning and shocking foes, heads exploding… the game falls into a cacophonous stutter-step groove. There is a definite high-tension sweet spot in co-op games that shines brightly in tight quarters overrun with baddies.

On the other hand, a single-player journey through Pandora, though occasionally interesting, mostly serves to reveal the game's fundamental issues. See, because of its limited-objective nature, going solo quickly causes murder fatigue to set in. Players who opt for a greater challenge, then, will find that quest obscenely difficult if they're not properly leveled.

Simply, the basic "level" system at work in RPGs remains in-place here, and with that comes a certain frustration. If a player deems to take on an available mission that is "harder" (or leveled above them), the player will be at a huge disadvantage, regardless of the types of enemies they are facing. Enemies will simply soak up a torrential amount of additional bullets and deal buckets of massive damage to the player. This convention, necessary for traditional RPG leveling-up mechanics, essentially turns any "hard" quests into endless games of cat and mouse with overpowered enemies. This saps the game of any looseness and improvisation in firefights. Sadly, this idea sticks players on a rigid questpath, the only real challenge ever being switching to particular weapons to do appropriate elemental damage. 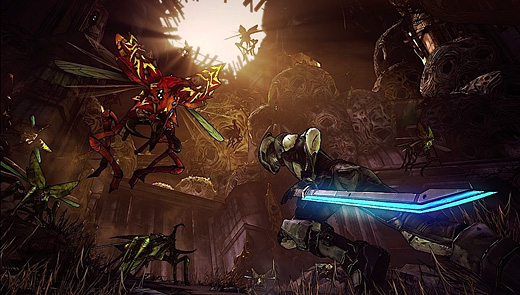 This quandary caused me to quit the first game: choose boredom or choose "Hard" missions and unending death at the hands of creatures I'd taken down many times before. This is not entirely the case with Borderlands 2, as "Hard" or "Impossible" missions are only available if the player powers through the story missions only. Still, though, it greatly affected my playthrough alone. My Commando chose not to do any optional missions, and guess what? My bruiser Commando became the most cowardly sniper you've ever seen in the game's later, high-level story missions. I tortured myself to make a point, I guess: single-player gameplay here will lead you to boredom or lots of frustrating death-walls.

That's not to say that it's all bleak and dreary. In fact, the world of Borderlands 2 is quite appealing on the presentational front. Gearbox has taken all of the "gray and brown" jokes about FPS games from the past decade and gone on to create a vibrant and colorful world. This graphical style is very attractive, and it meshes really well with the brash writing and characters that appear from the get-go. In fact, I applaud them for the copious amounts of humor in the writing—both in dialogue and in certain tongue-in-cheek missions that are silly references to pop culture staples. The tone may not be for everybody—it reels wildly from grating to quite sharp—but it's clear that Gearbox really loves what they do.

Oh, and I can't forget the loot, right? Another staple from the first game is here in full force, as well: lots and lots of dropped loot. Lots. While it's great to find a really special gun after sifting through piles of stuff, it can become frustrating to sit and look through so much inventory. Some items are certainly better than others, but it seems that the average player will spend probably a third of the game just comparing what they've found or deciding which ones to sell. I certainly don't have an elegant solution for this type of complaint (and I know some wouldn't even call that a downside at all), but it can really deflate in-game urgency in a work whose genre relies so heavily on it.

So, yeah; chances are players know exactly what to expect from Borderlands 2

. It may be a lot more of the same, but it's prettier, smoother, longer, and filled with more stuff. For those out there who just like to get in and zone out (or are just in the occasional mood to do so), they'll find that Borderlands 2 surely scratches that itch. Or, shoots it bang-bang dead. Rating: 7.0 out of 10.


Disclosures: This game was obtained via publisher and reviewed on the Xbox 360. Approximately ten hours of play was devoted to single-player modes (completed one time) and twelve hours of play in multiplayer modes.

Parents: According to the ESRB, this game contains use of alcohol, intense violence, blood and gore, language, and sexual themes. There's a light tone to the proceedings of this game, but parents should be well-aware that there is lots of adult content here. Some of it is sometimes referenced in a disturbingly offhanded way.

Deaf & Hard of Hearing: There are full subtitles for all of the spoken words in the game. Certain enemies announce their presence with vocal cues, so those would unfortunately be missed. Luckily, there's the mini-map!

I was discussing the game mechanics with a co-worker and hit upon this schism of 2 people not agreeing on what a game was… I found BL1 to be so stripped down and minimalistic that it seemed to me to be an unfinished game. Exploration was only awarded with more enemies, and more guns with slight stat increases. With nothing pushing me forward story or emotion-wise, I got tired of shooting things and tired of picking through loot. It just seemed pointless and empty. Almost like the industry was lampooning itself, making fun of it’s audience: you want a sandbox… Read more »

Thanks for writing, Anonymous. I played the game with multiple characters, some of them doing all available quests, and one of them trying to do a straight playthrough. I thought it might be sorta speedy to do “only” the story missions, but it turned out to be a ridiculously hard task. It’s my opinion that a game shouldn’t require you to do side missions to finish the main campaign, but that’s a small problem, really. Mileage always varies, but I found that the “harder” missions are only so because of the numbers difference in your character versus the enemies’. They’re… Read more »

Everyone’s entitled to their own opinion, but your’s is kinda wrong buddy. Sure, it was buggy. Sure, difficult solo-bits. But a lot of this can be fixed by COMPLETING SIDE QUESTS. Seriously, if you need to boost XP, go find some side quests, level-up a bit, and continue. It’s a well-designed experience if played properly. Also, the shoot-and-loot equation is brutally addictive. Sweeping out entire rooms of bandits and hyperion bad-asses with specialty grenades, innovative weapons, and lots of guns was pretty awesome. Plus, ALL THE LOOT. I found myself comparing every single gun I ever found, and constantly switched… Read more »

I’d say if you don’t play multiplayer, borderlands 2 was a terrible game. The game was not paced for single player gameplay, it felt like it was all about the co-op.

There were tonnes of slip ups too, like that big mech just standing by the highway that was (in theory?) supposed to be a boss.

Bored-lands 2 felt like it was trying to do too much and spread itself too thin. The giant open spaces made the world feel empty and the enemy design felt cut-and-paste. There were some decent moments but they were too few and far between.