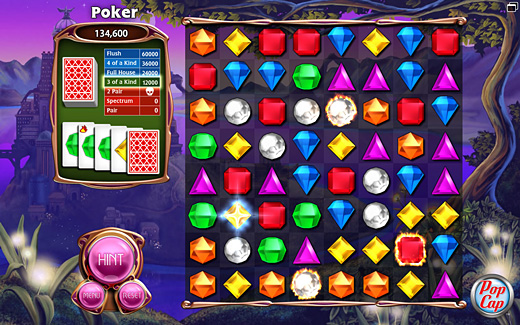 LOW The anxiety and dread elicited by the Ice Storm Mode are deadly.

WTF I have no idea how anyone could match six gems at once without the use of Lady Luck's hands.

Waxing poetic about a "casual" puzzle game may seem like a ridiculous exercise considering the use of such software: boot-up the game, spend five minutes clicking, and it's done. Suffice it to say, then, that the wizards over at PopCap games have done us right with the release of their latest, Bejeweled 3

; here's a game that has twenty ways to hit your click-happy sweet spot, and it does so with effortless aplomb.

Bejeweled has been a hit puzzle series since its inception some ten years ago, and its many iterations have been downloaded millions of times, including its wildly popular mini-version available on Facebook called Bejeweled Blitz!

Essentially, Bejeweled marks the beginning of the modern "match three" puzzle games like the similar Puzzle Quest series. Falling varicolored gems litter a playing field, and the player matches three to make them disappear; more gems soon fall to replace them. Match more than three, and the player begins creating "special gems" that explode or eliminate all of one color from the board.

It's simple, yes, but what Bejeweled represents is the ultimate in twitch puzzle gaming. Speed rules in making matches happen, but the slightest element of strategy leaves the player feeling that hard-thinking may help them continue before the timer expires or the matches run out. While the player matches furiously, they are continually scanning the board for the next move that might facilitate their next two or three. It's this dash of strategy element that keeps the casual player hooked, and the game soon becomes a slot machine with fifteen extra levers…

Bejeweled 2 introduced a few new modes of play to the series, and each one of the those has here been revamped in Bejeweled 3 to produce the ultimate balance of fast-action and excellent audio/visual presentation. For example, "Lightning Mode" fuses the old Action Mode and many elements from the recent Blitz! incarnation, with the timer continually ticking while players scramble to match time gems, extending their session. Lightning had me saying "Just one more game" more than I can remember in recent memory…

The brand-new modes are quite cracking. Ice Storm is also speed-based, as players match to fight back rising columns of deadly cold. The new Quest Modes bring a dozen new twists to the formula with games that focus on different elements of strategy, placement, and speed. Lastly, the brilliant Diamond Mine Mode sees players matching gems at the bottom of the screen to dig for buried treasure, bringing with it some excellent goal-oriented puzzle action. All told, the eight total modes will offer up even the slightest Bejeweled fan hours and hours of entertainment.

It's clear from the moment the orchestral music swells and the ominous Mortal Kombat-style announcer intones his "WEL-COME BACK" that PopCap wants players to see their new game as a rich digital experience, and in truth, it is. The varied music and shiny graphics really take the simple experience to a new level, and as evidenced with their recent Plants vs. Zombies, PopCap knows how to dress up simple premises.

While not as obviously intricate as Plants vs. Zombies, Bejeweled 3

is served well by the obvious refinement that's been infused into the product and the many years it's taken to do so, and it's everything a gaming sequel should be: it offers refinements, expansions, and a dozen coats of just-plain-purty…. Oh, and did I mention that it can be wildly addictive? Housewives, students, grandparents everywhere, be warned: Bejeweled 3 is coming to snatch away your afternoons. Rating: 7.0 out of 10.

Disclosures: This game was obtained via publisher and reviewed on the PC. Approximately twelve hours of play were devoted to the eight single-player modes. There is no multiplayer component.

Parents: According to the ESRB, this game is rated E for Everyone. The game is purely puzzle, and there are absolutely no offensive materials at all. There is no violence to speak of, no objectionable language, and no racy content.

Deaf & Hard of Hearing: The game is fully subtitled. Every objective in the game is easily explained through text when a mode is booted-up; and abbreviated versions remains on the screen during play.