Putting the "Modern" in Warfare? 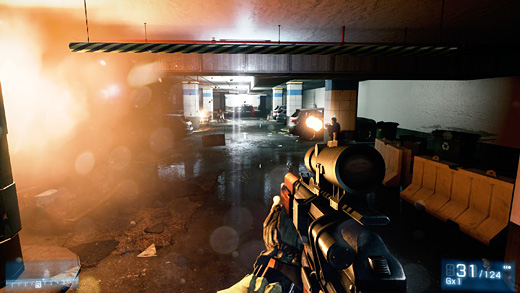 WTF Where is everybody?

How do you topple the giant at school who stole your style? "How indeed?" asks Battlefield 3

looking glumly across the lunchroom at that other, more popular gaming franchise.

At its core, Battlefield 3 is a multiplayer military shooter that, in this day and age, stands as "the other Call of Duty," like it or not. Battlefield may have the age and pedigree as a multiplayer game, but I think it's safe to say that Call of Duty is what most modern gamers think of when they want to fire up this sort of thing.

Surely, this put EA in a funny position when it came to making their new game stand out, and from the look of the single-player campaign, they surely pushed developer DICE to do Call of Duty one better in every aspect. In fact, the single-player campaign is so Call of Duty in its cinematic ambitions, I'm sure Activision was simply blushing when they got their hands on it. Let's not forget, too, how the billboards that preceded the game's launch flew up all over my Los Angeles screaming, "Above and Beyond the Call." Not content to be seen as "the other" military shooter, they went all out in making sure that it was better.

That said, comparing the two games is probably the best way to review them, as—let's be honest—there's not a whole lot that is truly innovative here, or in these types of games in general. I hope that statement doesn't surprise you. Say what you will about the genre's ever-evolving system of on-the-fly evolutions (or perks), the military FPS is not only long in the tooth, it's also built to provide the same experience from year to year—it's Madden for shooters. There's nothing wrong with that at the core, but it certainly makes it hard to try and look any deeper into the game than its newest engine technology.

As Richard said, and as most probably already know, Battlefield is all about its multiplayer. Like Call of Duty, Battlefield has been brought up-to-date with its own share of myriad perks and expansions that improve player abilities as they earn experience points in battle. Of course, what sets it apart from Call of Duty is the addition of vehicles to the combat. Does this spice things up in the game? Absolutely. With huge playing fields, destructible buildings for a tank to tear into, and plenty of air space in which to cruise around in a jet, the vehicles' additions give the game a lot more variety than your typical Call of Duty session. In fact, I'm willing to bet that Battlefield's variety and more nuanced gameplay made possible by said vehicles will amuse more fans over the long haul than Modern Warfare 3's insta-high, feed-bar-hitting multi experience. 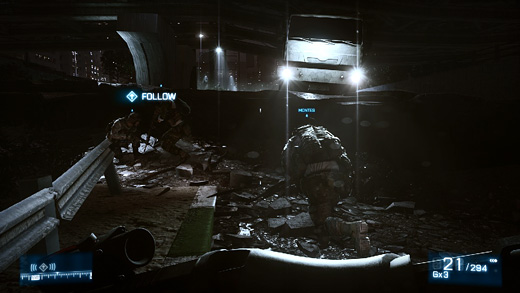 Unfortunately, the "real" Battlefield experience is most likely lost to those who would play it on a console, as I did. 64 players in one battle (as you find on the PC) would be pretty astounding if you could get a great squad together of truly dedicated fans. The 24 player limit on consoles is fine for the smaller maps (though none are tiny) but on the larger maps, the lack of players can lead to feelings of searching for squirrely nomads in a ghost town. This is, in my opinion,  the game's most notable shortcoming—well, aside from the lackluster single-player campaign.

Richard was right-on when he said that the single player leaves a fair amount to be desired. It's the standard military run-n'-gun with checkpoints, squad-mates, and yes, a shocking twist.

DICE's Frostbite 2 engine is commendably capable of realistic character models and realistic destructible environments, yet they aren't able to make the game transcend the "realistic shooter" norms. As I said before, there are plenty of intensely cinematic roller-coaster moments and QTEs aplenty-even some well-acted cinemas with serious emoting. What it all adds up to, though, is just a sum total of the limitations of what can be offered by realistic military shooters. Double crosses and nuclear devices shouldn't be boring, yet it's just such well-worn territory by now.

Herein lies the big, big problem with these sorts of games: they're no more "realistic" than anything else out there. They're great at replicating some shooting with actual real-life firearms, but hewing so close to these tropes leaves unfortunate devs nowhere to go.

Let's not forget, too, that as exciting as we want these situations to be, the real life events that inspire these recreations are never something that actual soldiers would like to go back to. Perhaps it's reaching to take some moral high ground when it comes to war simulators, but I tend to think it's a little more respectful to create games that allow for a healthy patina of the unreal. With that in mind, I think more adventurous and risky games would result. At the very least, the powers that be should limit us to one realistic military shooter every five years, so that new technologies can give us true upgrades to this sort of experience.

Of course, I probably would have enjoyed this game much more if I wasn't so god-awful at online shooters.  Wait, should that have come as a disclaimer at the beginning of this review? The author smiles slyly… Rating: 6.0 out of 10.


Disclosures: This game was obtained via publisher and reviewed on the Xbox 360. Approximately 8 hours of play were devoted to single-player modes (completed 1 time on Hard Mode) and 6 hours of play in multiplayer modes.

You definitely are right on point with this review. I would say that I am decent at online first person shooters, and have enjoyed owning many of them, from Goldeneye to Halo to COD. Lately though, I have had little desire to play more than a few rounds at a time in any FPS. Maybe it’s the lack of true innovation, maybe I am just burnt out on shooters. I will say, though, that the Battlefield 3 campaign bored me to tears. I still have not completed it, and it will probably stay that way.