Bells and Whistles, for the Win 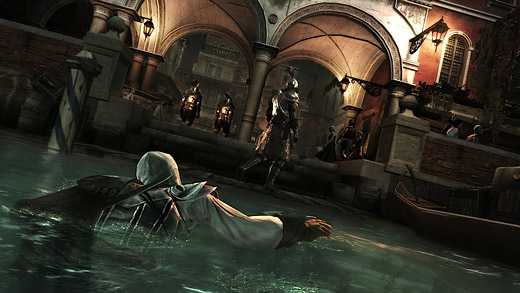 WTF The soldiers of the near-future will baton your ass.

How much does production value define a video game?

I have asked myself this question too many times to even begin to make list of all the games that have inspired it. A modern game should be many things in this oversaturated world of ours, but mostly it should engender a palpable level of enjoyment. The large video game companies are well aware of this, but they are also aware that to lure the reticent, to engross the interested, and to divert the critical, they should strive to dazzle their players with visual effects and ephemera that hide all of the digital seams.

Ubisoft knows this all too well, and the cinematic pacing, beautiful graphics, and cosmetically convincing world of 2007's Assassin's Creed are becoming trademarks in the canon of this publisher. From game to game, they seem to make it their quest to punch up all of the dressings of their products, while sometimes leaving the core mechanics unrefined. Like the gorgeous pageant-winner who collapses from anorexia the moment she leaves the stage, Assassin's Creed became for me a prime example of this sort of "big-time" Ubisoft production. Halfway through the game's bone-dry narrative, I did something that I hate to do: I pulled the game out of its tray without seeing its closing credits. While much less than a sin in most casual gamers' lives, for someone as invested as me in the entire video game experience, quitting the game felt like hacking off a limb.

So it was with great surprise that I found Assassin's Creed II a fully satisfying game through to its conclusion. While I certainly agree with most of Brad's take on the game's controls, I was mesmerized. Yes, the mostly intuitive climbing sometimes includes an occasional leap in the wrong direction. The combat is too easy and repetitive. And yes, climbing does constitute a large portion of the game's action. So, what's the hook? For me, it was in the story and the rich production value. Read that again: production value. I know that this statement should not hold water. A game is a game, damn it. It's there to entertain and inspire. I don't go to games for their menus and unlockable cut-scenes… And yet, Assassin's Creed II felt to me a case of the sum being greater than its parts. 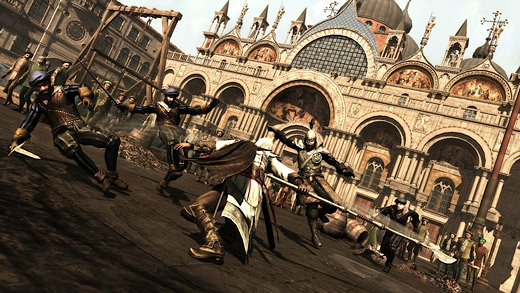 Let's start with the game's story—a definite improvement. While there's plenty of intrigue in Assassin's Creed II, the intrigue as the basis for the story as it was in the former game is gone this time around. In its place is what starts an essentially simpler story of a man whose family is taken away from him by forces he cannot control. The idea to initially simplify the protagonist's throughline was the first indication that the sequel's team was on the right track—and due to the fact that I identified with Ezio Auditore's desire for revenge, I was much more easily pulled in. Unfortunately, while the story does of course get more complicated, Brad is absolutely right that most of the interpersonal intrigue bits result in little more than a general wash. Where the story really succeeded for me was in the overarching conspiracy elements that come through in the storyline of the main-main character, Desmond. The deepening narrative involving him as a lynchpin in a stew of cosmic intrigue excited. The tiny, fragmented, and hyper-stylized unlockable cut-scenes referred to as The Truth also had me going. The search for the glyphs that revealed The Truth's hallucinatory video bits is the only recommendable "side-mission" in the game really, and it was great to see how they all added up. All told, it was hard to deny the pulpy sci-fi conspiracies that progressively linked more and more of the centuries-old escapades of an Italian with those of a man in the recent future piecing together the clues that will reveal humanity's true past and destiny. The game's climax, too, which billows out into some crazy sci-fi territory felt satisfying, and not ridiculously cheesy, as I had predicted.

I also, yes, fell in love with the game's clean, starkly designed in-game menus. While not something I'd usually commend, every time I opened up one to access some new color options for my robes, or to purchase a new artwork for my virtual villa, I would audibly exclaim over the flashy shapes and clean lines. And, aside from the presentations of all of the extras, the extras themselves were quite compelling. Assassin's Creed II hit a gaming sweet spot of mine, where I was actually compelled to seek out optional content and loot. I searched for dozens of hidden treasure chests to earn monies for weapons, armor, and the refurbishment of my family's villa. The tangible beautifications of your home and character are largely cosmetic, yet compelling, due to the team's hard work at the streamlining of the menus and all of the rich detail in the environments and equipment.

Finally, the game's supposed core, the assassinations, felt a little better this time around due to some of the game's new equipment and new character abilities. It seemed much easier to pull off the intended kills while keeping well-hidden—instead of the clumsy swordfights that always seemed to erupt in the first one. Still, there were a few times when my cover would be blown without much reason, but the times when I was able to pull off the desired kill (or simultaneous kills!) satisfactorily outshone the bungled attempts.

In the art world, and especially in gaming, pizzazz and glitziness are instant signs to any slightly critical eye that one needs to look twice; that what's at the core could very well be flawed. While this holds true for Assassin's Creed II, its wispy, sugary center was made delicious by the fine, fine chocolate shell. I'd have another. Rating: 8.0 out of 10.

Disclosures: This game was obtained from retail and reviewed on the Xbox 360. Approximately 20 hours of play were devoted to the single-player campaign.

This is absolutely one of those rare games that fails as soon as you start picking it apart, but works as a package. The story indeed hints at depth that just isn’t there. I had a lot of fun with it, there was a lot of content that I enjoyed. It’s not something i’d be quick to play trough again. It’s not a classic but very good for what it is.

AlexD is right. The story and pacing of the first game was bad enough to force some players to put the controller down. The second game had enough pacing and variety to cause me to finish the game, but I can’t say that the story was “good”. Your dad is murdered and you seek revenge, but the way Ubisoft presents the conspiracy isn’t as deep as they think it is. Yeah, the main bad guy becomes the pope, but you don’t actually get to experience that. Hell, it doesn’t even happen in a cutscene. You are sucked out of the… Read more »

For me, the story in the Assassin’s Creed series has consistently been a low point. Perhaps my suspension of disbelief has a low threshold, but I feel like the game could do without the framed narrative. The ending to both games are disasters. AC1’s setting established a pretty realistic world, but the ending unveiled all sorts of unexplained magic that come out of left field. AC2 was similar in that the entire game offers absolutely no pretense of what the ending has in store for the audience. The big reveal is completely unbelievable and ridiculous, and it makes an already… Read more »