Pull Out of Console, Blow onto Connectors 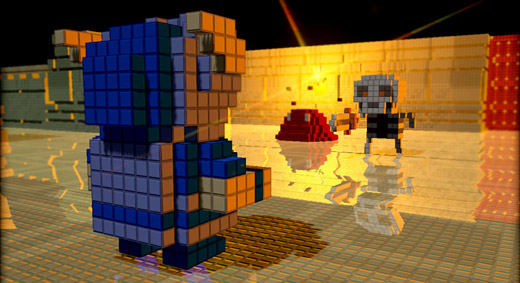 HIGH My face lit up at the prospect of appointing the Saving of The World to a walking taco.

LOW Replaying four hours of progress after a freeze really hurt.  (Save your game!)

is one of the odder games I've seen in some time. Put simply, it's like a giant Broadway musical based upon a play about frogs someone wrote when they were four years old. Well, maybe it's more like a two-story building made of couch cushions. These things may be breathtaking, but do they have gobs of real value?

Now, while a strong retro style is currently en vogue in the downloadable and independent video game markets, the recent release of this retail disc for PlayStation 3 is head-scratching to say the least. A bizarre and unique graphical style begins a strong showing, yet soon I realized that the game is a full-size Legend of Zelda re-do in every sense imaginable. While any games enthusiast would agree that most of the industry's banner games are thinly-disguised redressings of last year's banner game, it's rare to see a title plumb the depths of gaming and come back so shamelessly built to mimic another's look and feel.

The graphics catch the eye of many passersby; so many that one could almost say that it's strong enough to build a game around on its own—almost. My questions about the game's origins arose here. Was the entire project built solely as a showcase for the excellent visual convention, or were From Software and Silicon Studio actually interested in building a clone of The Legend of Zelda? As the latter case seems unlikely, one can only assume that it was the former idea.

There's nothing wrong with doing another Zelda game; those are nothing if not genre-defining. The issue with the release of a title like this is the title's ability to provide extra layers of content and meaning that are facilitated by the leaps forward in current gaming technology. While I enjoyed the nostalgia as much as Richard did in his review, I felt that 3D Dot Game Heroes does not provide enough of this to make the game remarkable. It's my opinion that most gamers will grow tired of the core mechanics of the game before the credits roll, as I did.

The game does offer some new layers that are notable. First is its robust character creation tool that allows you to not only customize your character, but also change them every time you load. There's also its many collectible and upgradeable swords whose size can eventually fill the entire screen, along with some fun mini-games that are good to pass the time. It also has plenty of secrets and sidequests meant to extend the length of the game, but most of these sidequests end up as tedious fetch quests only challenging in the ways they force players to remember in what town they heard certain key words.

In the game's defense, the designers are clearly aware of what they've made. The in-jokes about adventure and role-playing game gaming conventions are frequent and frequently funny, including nods to From Software's recent excellent game Demon's Souls. These asides are not enough, though, to keep the player off the track of "Oh yeah, I love these old games!" to the inevitable "Wait, I've done all of this BEFORE…"

Finally, the game's retro sensibilities don't end at the presentation, but also sadly affect the controls and game systems.  As in certain games of old, I frequently found myself fighting the controls to strike effectively with my sword or avoid certain pitfalls.  Also, the game froze on me a few times, leading to at least a half dozen hours of backtracking.  Game freezes are forgivable now and then, but for a game without an autosave feature like this one, it can be brutal.

will charm and delight a lot of gamers on-sight, and hold their attention for a good while.  Had the game launched as a shorter-form downloadable game, the charm would have lasted up until the game's end.

Disclosures: This game was obtained via retail and reviewed on the PS3. Approximately 15 hours of play was devoted to its completion.