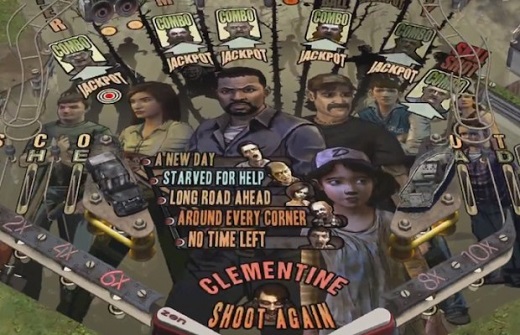 HIGH Seeing Lee and Clem kicking a ball around.

LOW It's hard to get info on objectives while playing.

WTF Why can't I get the ball into the Super Jackpot?!? GET IN THERE!!!

I suck at pinball. Really, I do.

Although I've played it here and there over the years, I'm not remotely what one could call an expert on the subject—I mean, I know the basics, but if you asked me what technical elements make for a connoisseur's pinball experience, I couldn't tell you.

However, I do know when I'm enjoying something. I might not be qualified to talk about the finer minutiae of table design, but I can say that the Walking Dead add-on table for Zen Pinball 2 is a pretty great thing.

The board itself is quite sharp, featuring portraits of Season One's main characters in the center, and the surrounding landscape is made up of key elements from all five episodes—the motel where the group was slowly starving, the bell tower that lured zombies in the abandoned town, the Everett family pharmacy, the "friendly" dairy farm, and more. It's a real treat to see so much familiar territory (literally!) at first glance.

Since this was my first time with Zen Pinball 2, I wasn't quite sure what to expect when playing, but I quickly found that the developers stay close to real-life pinball overall. That's not to say it's a pure simulation, though… Aside from the obvious elements such as ramps, flippers and targets to hit, there are twists which are only possible thanks to the magic of video games.

For example, the screen sometimes goes dark and a special "zombie" ball that eats normal balls appears on the board. At other times, the player is transported to a totally different area to shoot zombies in a sniping minigame.

These bits were great, but the best were when a miniature Lee and Clementine appear on the table to kick around a soccer ball, or to fend off a walker. The table uses voice samples from the same actors who brought the pair to life in Telltale's work, and because of this, there's an immediate and authentic emotional connection. When I hear Dave Fennoy say "be safe" as Lee, it's like getting a hug.

That said, although I loved these elements and they did a lot to enhance the Walking Dead factor, having even more ‘impossible' things happen would've been appreciated—things like more zombies on the board, more special scenes to dip into, more scenes away from the table, and so forth. After all, virtual pinball doesn't need to acknowledge real-world limitations, so why keep it so conservative?

Along the same lines, the developers could have done something to make the board's communication clearer. At certain times instructions will flash on-screen via a small panel that's meant to simulate the LEDs found on actual pinball machines. "Shoot the target", "bonus activated" or "multiball awarded"… That sort of thing.

Trying to copy this semi-legible LED system is nonsensical because it requires a player to take their eye off of the board and struggle to see what it says. It's difficult to figure out when a special event triggers, and when I am aware that an event is active, it's tough to figure out what I'm targeting. The game might tell me to hit ramps to find more food, but all I see are a billion flashing lights. What exactly am I shooting for? A better result could be had by including more obvious visual effects, easier-to-read text, and clearer audio cues.

Despite those minor struggles, generally playing the board was great and seeing that the developers included the ability to ‘make choices' taken from the plot of Season One was an unexpected surprise. After all, choice is one of the hallmarks Telltale's game was based on, so getting a pinball-based option to high-five Duck again was neat—and you better believe I high-fived him. Every time.

Although actually making these choices was communicated through the fake LEDs (another example where special effects would've been a better choice), Zen Pinball 2 hits on enough of the high points from Telltale's work that anyone who's played through it won't be able to miss what a great homage it is.

I may not be ready to write an in-depth technical analysis on every inch of the Walking Dead board, but it strikes me as a well-designed table that knows its subject inside and out, and it gives fans of Lee, Clementine, and the rest a whole new context within which to play. I had a great time getting into it, and revisiting a series I have so much love for was quite welcome. Rating: 8 out of 10.


Disclosures: This game was obtained via publisher and reviewed on the PS4. Approximately 6 hours of play were devoted to the game and the #1 spot on my friends leaderboard was achieved. No time was spent in multiplayer modes.

Parents: According to the ESRB, this game contains: fantasy violence and mild language. The music and sound effects are quite creepy, and some close-ups on the zombies can creep kids out. It's not as explicit as the game it draws inspiration from, but little ones might be better off with some of the other pinball tables instead.

Deaf & Hard of Hearing: No audio cues are necessary to play the game. The visual information is a bit of a mess (so good luck with that) but it's generally accessible with no problems.