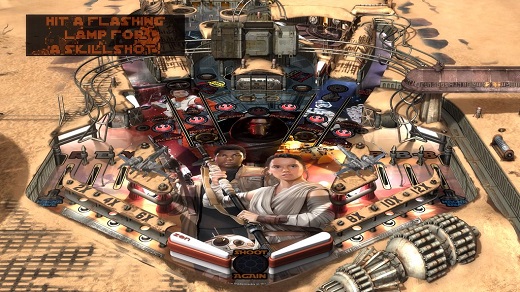 LOW Some of the special features are tough to activate for non-wizards.

People say that the most reliable things are death and taxes, but I'm starting to think that Zen Studios should be included in that list. Over the last few years they've turned out a number of great virtual pinball tables, and their newest pair based on Star Wars: The Force Awakens continue the streak.

The first table is called The Force Awakens. It's set on the desert planet Jakku from the film's first scenes, and showcases a number of recognizable elements. In addition to the general décor, specific actions trigger things impossible on a real table, like Rey scavenging for scrap or a crowd of rathtar monsters that suddenly appear from holes in the play surface.

Of the tables Zen has put out recently, I think this one feels the best in terms of its angles and spacings. I found myself quickly getting into a solid groove a number of times, and almost all of the geometry here clicks in a great way. It feels really, really right.

The other table included in this two-pack is called Might of the First Order, and as one would expect, it features the darkside imagery from the film—a flame trooper shoots fire at the top of the board, a miniature hangar loads TIE fighters, and more.

While this board is totally solid, it doesn't feel as tightly perfect as The Force Awakens. Most of the features are in the top half, and that part of the board ends up feeling a bit too crowded while the bottom half seems too empty. That said, it does have many special things happening—aspects like a sub-table below the surface of the main playfield or seeing a star destroyer beam the ball up are treats.

The only complaints I have about either of these tables are ones that I've had with Zen in general for quite some time.

For starters, while the special features are quite cool, I would like to see even more fantastical elements added. Aside from that, it's hard to read the faux LED screen at the top of the board and there's so much happening at once that it's hard to recognize what I should be shooting for as conditions change. More obvious markers pointing me in the right direction would be welcome. At the very least, give me the option to turn more hints on, since I'm not a purist and wouldn't be offended at less realism happening during play.

Star Wars fans who want more and can't wait until the next film can at least partially tide themselves over by racking up a few million points with Rey, Finn, Kylo Ren and the rest.  Zen's done a great job of capturing the source material, and this package is sure to please pinball players who aren't Force fans, as well. Rating: 8 out of 10


Disclosures: This game was obtained via publisher and reviewed on the PS4. Approximately 4 hours of play were devoted to the pair and the #1 spot on my Friends leaderboard was achieved on both tables at the time this review was written.

Parents: According to the ESRB, this game contains fantasy violence and mild language. That said, it's hard for me to find anything offensive here. If you ask me, it's 100% safe for kids. It's pinball!

Deaf & Hard of Hearing: D/HH players will miss out on some helpful audio cues which signal when certain features are active.  The visual information is on-screen but it can be a bit of a hard-to-read mess, so good luck with that. In general, though, it's just pinball, so I'd say it's fully playable even without the cues.