It's been fun. Don't come back. 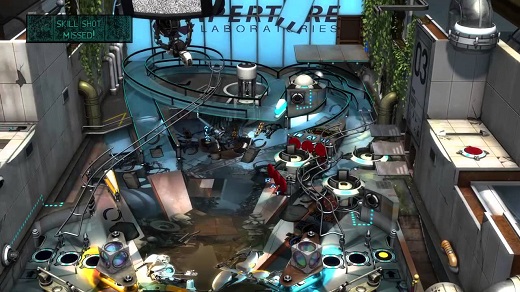 HIGH Getting Atlas and P-Body together for the first time.

LOW Constantly losing my ball in the leftmost gutter.

WTF I thought the Companion Cube would play a larger role…

As a reviewer, I occasionally run into a problem when examining several pieces work from developers who keep knocking it out of the park–after a while, there just aren't a lot of positive things to say without repeating myself. The current source of my frustration? Zen Studios.

I've enjoyed the pinball tables that Zen has been putting out for a while now, and it seems like each one is better than the last. I feel like a broken record at this point, but what else can I write about these folks that I haven't said already? In light of this, let's keep this short.

So, the source material. I'm guessing that every person who might lay eyes on this review is probably more than familiar with Valve's seminal work, but if by some strange circumstance there's a reader out there who isn't, click here to find out all about it.

Now that we're all up to speed, I feel confident in saying Zen has done a fantastic job of incorporating all of the various Portal elements into this table. The entire playing field looks like a broken-down room straight from the ramshackle testing labs of Aperture, and every recognizable character can be found and heard. Malevolent intelligence GLaDOS resides in the upper-left corner, Atlas and P-Body pop up when activated after a series of combos, Wheatley offers commentary, and even the unseen Ratman makes an ‘appearance' via a special sub-table.

However, the touch that makes the table stand out for me is that series protagonist Chell is found standing at the bottom of the table on full display. No longer hidden behind a first-person perspective, it's a real treat to see a miniature version of her, complete with springy boots and famous portal gun. When certain conditions are met, she'll shoot a glowing hole into the nearest wall and move around the environment, and I was tickled to see it.

The board itself has a good flow, and there are plenty of special features to hit. I strongly suggest that anyone playing take a moment to read the table guide, as it sheds light on all of the goals that aren't immediately apparent. For example, it may seem like a standard table, but there are actually five different 'quests' to be done, and those are capped off with a 'boss battle' against GLaDOS at the end. This overarching design is quite cool, and although actually fulfilling the requirements and finishing the table is a tall order, I love that this level of nuance and sophistication is worked in to what could have easily been a much simpler affair.

Criticisms? I don't have many.

The biggest one with Portal specifically is that despite fiddling with the audio settings, I often found it hard to hear some of the lines from GLaDOS. Since she's probably the most memorable character from the series, it seems like she should be heard loud and clear. Maybe it's my TV but no matter what I did, her vocals were too subdued.

The only other complaint I have is one that I have with Zen in general. While the designers are clearly emulating real-life tables in many ways, there's no question that they are creating video game pinball. The laws of physics don't apply, and as such, I would like to see more fantastical elements and clearer visual cues for the special objectives.

When I'm struggling to get a bonus or to hit the marks needed to trigger a special occurrence, it's hard to read the faux LED screen at the top that's meant to resemble the way a real-life table looks. Also, there's so much happening on the board that it's often hard to recognize what I should be shooting for as conditions rapidly change. More obvious signs and markers pointing me in the right direction would be quite welcome. At the very least, give me the option to turn such things on, since I'm not a purist and wouldn't be offended at less realism in the table design.

Apart from those criticisms, there's not much to grouse about. The Portal add-on to Zen Pinball 2 is another excellent addition to the already-strong lineup of tables available, and having played most of the selections on offer, I'd say this one ranks right near the top. For anyone who loves Portal, pinball, or both, this is an absolute no-brainer. Rating: 9 out of 10.


Disclosures: This game was obtained via publisher and reviewed on the PS4. Approximately 8 hours of play were devoted to the game and the top spot on my Friends leaderboard was achieved at the time this review was written.

Parents: According to the ESRB, this game contains fantasy violence and mild language. That said, it's hard for me to find anything offensive here—even GLaDOS herself holds her most acidic lines back. If you ask me, it's 100% safe for kids. It's pinball!

Deaf & Hard of Hearing: No audio cues are necessary to play the game. GLaDOS's quips aren't subtitled, which is a bit of a bummer, but none of it is relevant to play. The visual information is a bit of a mess (so good luck with that) but it's accessible with no problems.

The thing about Zen’s pinball offerings is that the laws of physics DO apply, which is what makes their tables so good. As someone who spends probably way too much time on steel and wood machines, Zen’s video tables are very, very close. And it their rooting in reality, while allowing themselves leeway for something awesome (like having a Deathstar or At-At emerge from the play-field, or a donkey act as a plunger) that keep real pinball fans playing.