Game designer and low-around good guy Robert Boyd (@WereZomPire) has a nice little piece over at Gamasutra about the latest Zelda, Skyward Sword, and why the complicated controls may be more of a hindrance than helping to create an immersive experience. 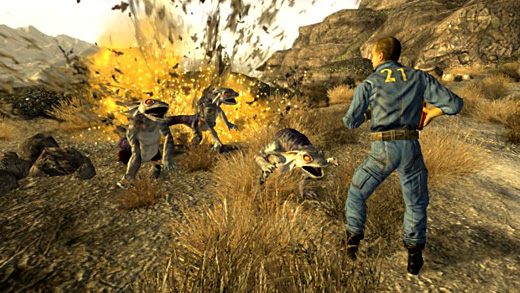 After Skyrim bored me to the point that I did not care to continue, I felt a little disappointed… it wasn't so much that I had built my hopes up for that particular game, but now that I've played almost everything I needed to play before the end of 2011 (for review purposes) I had been looking forward to closing out the year with a bigger game—something I could coast with for a while during my break from the hectic pace of "must review XYZ."

I was still in the mood for a Western-style RPG, and a quick look at my backlog reminded me that I still had an unopened copy of Fallout: New Vegas that I picked up but never played thanks to the widely reported of glitches and bugs that plagued it. I got it for a song and I figured that if I waited long enough, the game would eventually be patched and playable. I did and it is, so I figured there was no time like the present to jump into it.

To give a little backstory, Fallout 3 is one of my favorite games of all time… you can even check the list on the right side of this page and see for yourself. It had a few problems and there were some things that I didn't care for, but overall it was a fantastic experience and if memory serves, I believe I put well over a hundred hours into it and never felt bored or tired of it until I got to some of the rushjob DLC additions. (Mothership Zeta is just awful…)

In any case, I wasn't expecting much from New Vegas except a lesser, repeat performance of Fallout 3. Now that I've finally started it, I've got to say that I've been loving every minute of it. I may even like it better than the previous game…

At this point I'm about twenty hours into the adventure and quite impressed. Of course, it's not as visually beautiful as the majestic trees and mountains of Skyrim's Nord paradise, but the quality of the writing, quests, and general game design more than make up for a slightly lower graphic standard.

For example, I got to the town of Novac and was a little surprised at how well all of the various quest threads in and around the area came together to show how much care and effort the developers put into it. I don't want to spoil it for those of you who haven't played it yet, but I will say that if you take the time to talk to everyone in the town and follow up on all of the leads, just about everything there dovetails quite nicely, and in an intricate fashion.

I'm also quite pleased with the new emphasis on followers/party members in New Vegas. Although companions were present in Fallout 3, they didn't come into play until well into the adventure, and I rarely used them since I was too afraid of losing them permanently.

This time around, they see plenty of action and add a great deal of strength to my party thanks to the fact that they only get "knocked out" during battles and revive soon afterwards if you're not playing on Hardcore mode. I've only found four so far, but they're all interesting in their own way and each has much more personality and dialogue than the drones in Skyrim. They've all got their own questlines as well, which I think is just fantastic. In following one of those personal quests, I ended up triggering a series of events that altered my relationship to the entire world. It seems clear that these are just not just token additions, but substantial pieces of the New Vegas experience.

I can already tell that I'm still in the early days of the game—I've got six or eight "main" quests open in addition to the critical path, and the game keeps "notes" of incidental or tertiary quests that are also available for completion. If the rest of New Vegas is as content-rich and as surprisingly varied as what I've already seen, then I'm guessing I'll be quite busy (and happy) in this wasteland for some time to come…

I agree that Fallout: New Vegas is really awesome. It’s too bad it came out with so many bugs initially, because it is much better than Fallout 3. Novac is just the beginning, too. There’s all sorts of great quests once you get to the strip and the area around there. Enjoy. 🙂

Fallout NV is one of the best games of this generation.In my opinion it is much better than Fallout 3. And it is a game with many different endings and many different ways to play. It even has some of the humour of the older games. Too bad most critics focused on its bugs and didn’t give it the praise it deserved. Skyrim launched in a worse state and almost no one of them noticed…