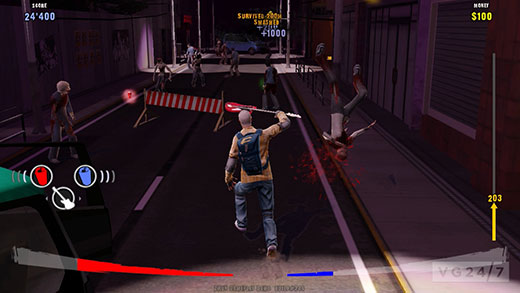 As a gamer, is there bigger heartbreak than seeing a title with potential going unrealized? I can't count how many things I've played that were disappointingly almost-but-not-quite-there, and Z-Run from Beatshapers is another that falls into this category. I can see exactly what it's going for and it's on the right track, but it's too unpolished and rough to pass muster.

In Z-Run, the player takes control of a character who's hoofing it away from the zombie apocalypse, and it handles like an auto-runner—the selected character (male or female, no customization) is constantly sprinting and can't stop. It has much in common with Temple Run, One Epic Knight, or any of the 18 billion others found on iOS. However, it initially feels like more than a phone clone because it uses the Vita's buttons and sticks while letting the heroes jump, slide, dodge roll, jump kick, and attack. This is a broad moveset for a game of this type, not to mention the health and stamina pickups, and a variety of melee/projectile weapons to use.

On the surface, all of the elements seem to be in place—the concept is good, the general design is good, and it feels like a nicely-sized project for a handheld. Unfortunately, Z-Run falls hard in the execution. I understand that it's coming from a small team with limited resources, but that doesn't excuse the level of roughness here.

The biggest problem is that the collision, hit detection, and running into obstacles just doesn't feel as smooth or as natural as it should in a game of this type. The view is frequently obscured, and when I crash into something, there's no sense of weight or physics. The game simply comes to a jerky, stuttering halt until the avatar can get un-stuck. Attacking feels just as off, with some attacks connecting while others don't, and jump kicks that seem drawn to targets as if magnetized.

Z-Run has a pleasantly kinetic pace when it flows smoothly, but as far as I can tell, the enemy and obstacle placements are randomly generated. Thanks to this randomness, sometimes the streets are so clogged that it's impossible to get any kind of a rhythm going, and managing a successful run feels accidental. There just isn't any craft in how the levels are laid out, and it rarely touches the flow state that prime auto-runners are built on.

Every other aspect of the experience is also lacking, like the painfully obvious oversight of the game not allowing items to be equipped between levels even though there's a menu option for it. Also, weapons degrade and items are used up during a run, but they aren't reset if the player decides to restart. If a finish isn't reached the first time, there are fewer resources available on each successive attempt.

Plot-wise, the game is absolutely ripe for a small narrative to fill in the gaps between levels, but the devs don't even try. There's literally nothing there. Worse, the game ends with an incredibly abrupt cut to credits, offering no warning or dramatic buildup beforehand. I couldn't have been more surprised.

There are a number of other things I could call out like lack of variety in the weapons, lack of variety in the levels and enemies, the lack of customization in the characters… the list of flaws or missed opportunities could go on and on, but I'm not trying to tear this game down. I genuinely like it when the parts come together, and this team has the beginning of a great thing. Unfortunately, its current form, Z-Run seems like the early access or beta version of something that needs at least another six months in the oven. Rating: 2.5 out of 10


Disclosures: This game was obtained via publisher and reviewed on the Vita Approximately 2 hours of play were devoted to the single-player mode, and the game was completed. There are no multiplayer modes.

Parents: According to the ESRB, this game contains: violence and blood. This is tyical zombie-themed fare—melee hits, a bit of blood, and so on. It's not especially gory, but still might not be apropos for young ones.

Deaf & Hard of Hearing: There's a bit of text at the beginning, but no real story or dialogue. No sounds are needed for successful gameplay. It's accessible.