Long Absent, a Little Different, but not Unknown 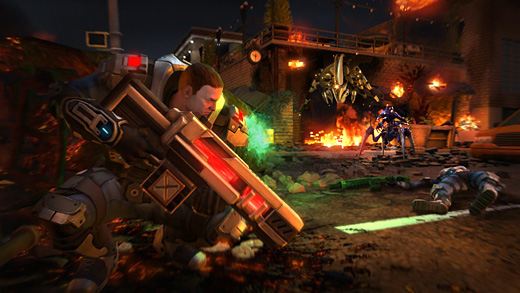 HIGH The resurrection of a long-absent, fan favorite franchise.

LOW Restarting after ten hours due to crushing poverty.

If nothing else, the developers at Firaxis had their work cut out for them.

The original X-COM: UFO Defense was an undisputed classic held in high regard by anyone old enough to have played it in the early 90s, and it's never easy to update something so treasured for a current audience. From this perspective, XCOM: Enemy Unknown

is largely successful in taking the core source material and re-molding it to fit current sensibilities.

On the other hand, when viewed as an experience unto itself, it's not as balanced and as satisfying as it could be. I certainly want to applaud the work that's been done, but while the game gives a stellar first impression, I found that my enjoyment decreased incrementally with each additional hour invested.

As an isometric squad-based, turn-based strategy game, XCOM: Enemy Unknown is easy to get into thanks to a straightforward formula and a fiercely streamlined amount of options. The emphasis is on tactics. Players will spend most of their time moving characters from cover to cover while taking shots at visible enemies, or holding in "overwatch" mode to guard against any that suddenly appear. Each map is of a small-to-moderate size, and portrays various real-world scenes; a gas station, a stretch of forest, an office building, and so on.

Characters are divided into four classes (Assault, Support, Heavy and Sniper) and the player is free to mix and match as they choose. The initial squad size is only a quartet, but the maximum of six troopers is soon reached, and it's just the right number. Less feels like too few, and more would be unwieldy.

It's been quite a while since a game of this sort grabbed me; the Western art direction and extraterrestrial subject material are a great change of pace from the usual Japanese-influenced offerings, and there's something deeply satisfying about moving soldiers around like the deadliest chess pieces that ever were. It's not quite as deep or as nuanced as I might have wished, but it's still satisfying to bring the hammer down on aliens through solid planning and brainpower.

I was also quite happy to see that the HQ management of the original was included in Enemy Unknown, although like combat, it's very streamlined and simplified. This side of XCOM asks the player to design their base of operations for optimal efficiency. A wide variety of rooms can be installed (Workshop, Science Lab, Power Generators, etc.) and placing similar sections adjacently will increase their functionality. Also carried over is the now-classic ability to dissect alien corpses for developing high-tech items and ever-deadlier weaponry. 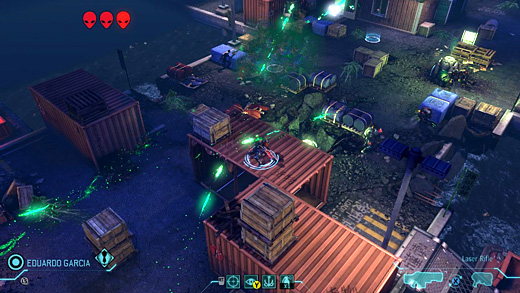 When viewed on a macro scale, XCOM: Enemy Unknown seems to be the total package, and a spot-on update to something which earned the devotion of so many players back in the day. However, once I got over the initial rush of this long-lost face looking so fit and trim, its weaknesses started to appear. For example, as a strategy and tactics fan, I found it hard to accept the fact that line-of-sight in the environment plays an inconsistent role in most circumstances, and even worse, throws logic out the window with the "overwatch" mode mentioned earlier.

When a character is "overwatching," they get a free shot at any enemy who crosses their field of vision. The problem is that the game doesn't recognize when the shots are impossible. I saw characters shooting through walls, solid structures, and even entire buildings at enemies—and then hitting them—with laughable regularity. I have no idea how the developers thought the game was "done" when these ludicrous shots are possible.

The non-combat aspects of XCOM: Enemy Unknown have issues as well, primarily in the balance of resources and money. After getting ten hours in on my first playthrough, I was in such a severe state of poverty that I felt it necessary to scrap everything and start over. On my second attempt, I ended up with a cash surplus and frequent shortages of raw materials.

It's not always clear which resources will be necessary to advance the plot, so in trying to kit my troops with better gear, I was inadvertently consuming things I needed later. Due to the frequent lack of story-crucial materials, it's too easy to get stuck in tedious cycles of grinding through dull, samey missions while waiting for the game to drop what's required to maintain forward momentum.

The developers have said this paucity of resources was intentional, as a way of making players feel the tension of deciding between wants and needs, but it doesn't feel tense—it's just progress-halting bottlenecking that unnecessarily inflates playtime. As a result, the campaign's pace sputters into an overlong, patience-testing trudge when it should be ramping up to a fevered pitch.

Apart from what I've mentioned, there were production issues to deal with—I had characters "fall" through the world several times, and I had two sessions where my characters could move but not shoot. Because of the limited camera angles, it was sometimes hard to tell where a rocket would hit (friendly fire? No thanks!) and it's often tough to work effectively in multi-level buildings. It was also common to find that the top portion of the screen was cut off when zoomed-in, leaving crucial information unavailable while deciding whether to take a key shot.

While I still call myself an XCOM fan and was thrilled to see the property return after so many years, I couldn't commit to XCOM: Enemy Unknown

wholeheartedly. Although I appreciate the update for modern audiences, the game comes off as a bit undercooked and stumbles on things which should be airtight. On the other hand, it's still a very welcome addition to a genre that's gone a bit stale—just be prepared for a little probing when dealing with these creatures from another world. Rating: 7.0 out of 10..


Disclosures: This game was obtained via publisher and reviewed on the Xbox 360. Approximately 34 hours of play were devoted to the single-player mode, and the game was completed. No time was spent in multiplayer mode.

Parents: According to the ESRB, this game contains blood and gore, strong language and violence. Although this game wouldn't be my first choice when my kids needed something to kill a few hours with, I didn't find it particularly objectionable, either. Of course, most of the action is about aliens shooting humans, or humans shooting aliens, but the graphics are mostly on the small side and hardly the bloodiest thing I've ever seen. I genuinely don't remember any instances of strong language.

Deaf & Hard of Hearing Gamers: There shouldn't be any problems. There are no auditory cues necessary for gameplay although the sounds and music do shift in certain circumstances. That said, I didn't find the sounds to be of great use, and had no difficulty playing with the sound off. All dialogue in the game can be accompanied with subtitles.

Interesting. I thought the scarcity of resources was the point of the game. That I had to scramble and decide what I need and don’t need to proceed, which can bite me later on. XCom is a rarity in modern games, since it’s one of the rare big budget titles that has a fail-state. Unlike most games where you can always come back, in XCom it can happen that there is no way to win after 10 to 15 hours in the game. That happened to me as well. I had to restart after about 10 Hours because of some… Read more »

I can attest to the ludicrous shots issue. I’m playing on PS3, and my troops regularly shoot through walls (sometimes several) whilst on Overwatch. I find this issue to be the worst, with the lesser issue of close-up kills looking ridiculous being particularly disappointing (but completely aesthetic at least).

Adore the game, but definitely wish they’d ironed out a few of these issues. The line of sight issue alone can affect the outcome of a mission in a pretty major way, so it really should’ve been fixed.

Looking forward to some meaty DLC, & to having some MP matches.

Hey Sleeve. >>Brad, I’m curious: how do you think this game compares to the original X-Com: UFO Defense (or UFO: Enemy Unknown)? If memory serves, the last time I played it was somewhere around 1997 and I haven’t played it since then. I thought it was pretty awesome at the time and have fond memories of it, but I have no idea what I would make of it now, or how well it holds up. >>In XCOM, just like the original, scarcity is part of the game. You never have enough money or resources to buy everything you want, or… Read more »

Brad, I’m curious: how do you think this game compares to the original X-Com: UFO Defense (or UFO: Enemy Unknown)? You claim to be a fan, yet your description of XCOM’s gameplay suggests that you aren’t much of a fan. It’s important to view the “combat” and “non-combat” aspects of XCOM as a whole. Like the original, XCOM is less a strategy game than it is a war simulation with strategy game aspects. XCOM places even greater attention than the original on the turn-based strategy part. But just like the original, every decision you make in the situation room impacts… Read more »