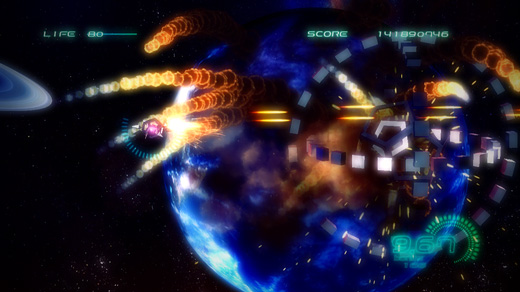 So, here is the second of my week-long XBL Indiefest.

Like I said last time, I've got over three hundred XBLI demos saved up.

To clear out my hard drive, I've decided to go through at least three games per night. I'll play the free trial period of each Indie that catches my eye, and at the end of that period, I'm going to give a quick one or two paragraph description of what I saw and then decide on one of three verdicts:

I Bought It, I Deleted It, or Needs Further Investigation.

Also, there are a number of really good games that I've already played, so I'm going to save up mention of those until the end of this Indiefest. The ones I will be covering daily will be titles I've never played before.

In this game, the player controls a little pink blob holding a fishing pole. Whipping the left stick back and forth casts out a line with a lure at the end. Dozens of fish are within view, and the only thing required to catch them is to place the lure within their field of vision and to have bait tough enough to handle them. (For example, the player will need to upgrade to the large lure in order to catch large fish.) Reeling in a fish is simply a matter of holding down a button, and each one retrieved earns a certain amount of money.

While this game has an extremely appealing visual style, I became bored with it almost immediately. There didn't appear to be any skill involved in catching the fish, and upgrading the equipment seems as simple as catching a few small ones, buying some stuff, and then catching the bigger ones. I say "seems" because the store function was disabled for the trial, so the only option available to me was pointlessly catching small fish over and over. I suspect there isn't much else to the game.

(Also, I found it annoying that the store was represented as a buoy that the player must hit with their lure. Is there something wrong with pushing one of the many buttons going unused on the controller?) 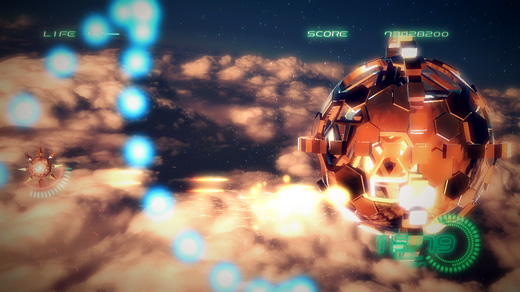 In the realm of eye-melting graphics, surely this title must rank near the top. Players control a spherical object in a side-scrolling quasi-bullet hell shooter. There are a few different modes and the player's ship-thing can fire standard shots, a rechargeable laser, and can collect screen-clearing bombs and such. The pace of play is fairly blistering and trying to visually discern objects is a little overwhelming at first, although a groove can be found before long.

Things were pretty enough but I couldn't see what the appeal was until I remembered that the "revolve" function was mapped to the triggers (which I hadn't touched.) As soon as I did, my jaw dropped… the entire playfield can be rotated as though it was a cylinder.

It's hard to describe, but when bullets start filling the screen and death seems imminent, a quick revolve turns everything on its side and impenetrable curtains of projectiles are flipped to a different plane. This revolve mechanic provides an easy escape form certain death, and the player's ship shifts into another area of 3D space. Words really can't do it justice, but trust me, the effect is incredibly impressive. 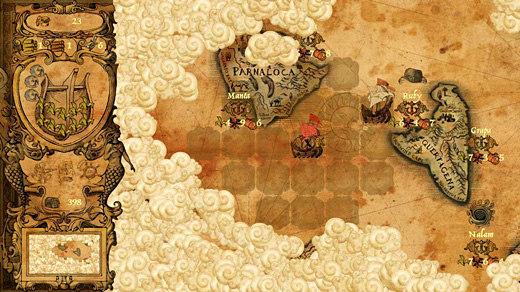 To be perfectly honest, I'm not really sure what this thing is about. The player controls a ship tooling around on a nifty-looking map that resembles one of those ancient illustrations from when people still thought the world was flat. It's a great visual style, but the game starts off telling the player basically nothing, and it's not the kind of affair where someone will intuitively know what to do.

I moved my ship over a few squares and unexpectedly entered into some rock-paper-scissors style combat. I was immediately trounced by the computer, because, gee, playing rock-paper-scissors against AI is hardly fair, now is it? At this point I paused and went into the "how to play" section of the pause menu. I got hit in the face with a lot of text, realized that I would have to go from port to port and trade goods for various prices, and then promptly exited. There may be a fun game buried somewhere in here, but first impressions were horrible and the demo timed out before I got a handle on it. Whee. 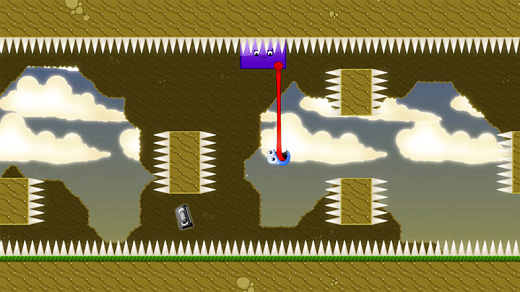 This game stars a little blue jellybean-shaped critter with a long, stretchy tongue that can attach to surfaces and swing around. The premise is (apparently) to get this guy from the bottom of the mountain to the top, where there's an adult video store that closes at midnight. I laughed out loud at seeing this, but my laughter stopped immediately when I saw how completely messed-up the tongue-swing physics are.

Jumping, grappling, and swinging are things that I love to do in any game, but the jellybean completely failed to move in any sort of pleasant or engaging fashion. The motion felt completely foreign and artificial, and elegant simplicity of play is an absolute must in a project of this kind. The feedback I got from trying to swing around was repellent, and after suffering through the demo, there was no way I was going to sign up for something that felt as difficult and obstinate as this.

That's it for Day Two of my Indiefest. Check back tomorrow for the next round of games, and I'll also do a recap of my favorites (both old and new) at the end of the series.

It’s a pity that the two most visually arresting games (Ancient Trader here and Shadows in the Underworld today) got poor review; I would have bought them based on the box art if I’d seen them in stores.

This is a great feature by the way; I’d love to see more of it. It would be great if it became a monthly column with a different reviewer taking care of it each month.