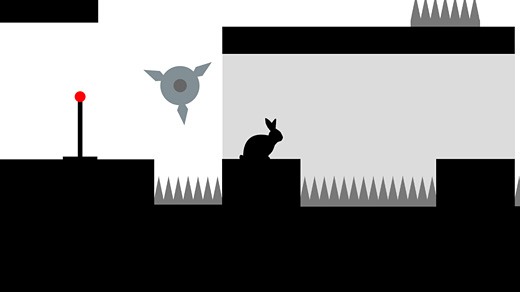 I'm in between reviews at the moment, so I took the luxury of trying a couple of XBLI titles recently.

The first was LaserCat, which has the player exploring room after room of hazards as a cat… made of, uh, lasers… I guess.

It reminded me greatly of VVVVVV, except that this title was much easier on the player with a far friendlier level of difficulty. It was a fun enough title, but after having completed VVVVVV, I don't feel much desire for another title so similar to it.

The second title I tried was Lab Rabbit. In this one, the player is a rabbit silhouette trying to escape from (wait for it) a lab by leaping over tons of pits and spikes. This is generally one of the kinds of XBLI games I enjoy due to the stark visuals and simplicity of play, but I've noticed that a significant number of indie developers have huge problems with jumping mechanics.

Lab Rabbit was no exception, displaying absolutely horrendous jumping physics that require the player to fight some odd inertia in addition to manipulating the direction of a jump with the left stick in a way that did not feel intuitive. If the jumping had been more manageable I probably would have bought it, but I've got no time or patience to fight the idiosyncratics of a game that should have its core function absolutely dialed-in.

The final Indie I tried was Blocks That Matter, and this one ended up being a purchase. The idea of the game is that the player controls a small robot able to destroy and absorb blocks that are in its way.

Simple enough at first, but the hook is that the robot can reconstruct these blocks in classic Tetris shapes in order to aid its movement through each level. I didn't get very far in it, but I appreciated the combination of puzzle game and platformer, and the few levels I did play started simple but became pleasantly complex before long. 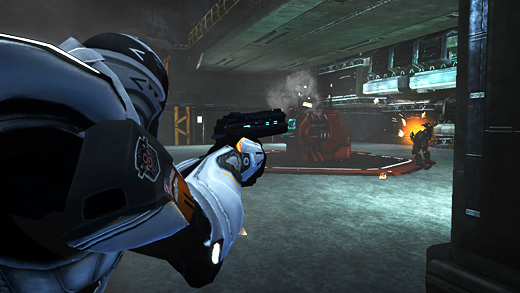 Recently started and finished Section 8: Prejudice on 360. I was a pretty big fan of the first Section 8, and had been looking forward to this one for a while. After putting in my time, I have to say that it didn't do much for me that the first hadn't already done.

The single-player campaign was certainly expanded, but the writing was pretty bad and didn't have any particularly memorable missions or high points. I completed it out of some vague sense of obligation, but I can't really say that I enjoyed it.

The multiplayer was still fairly enjoyable and I think it's a good formula, but the game becomes an exercise in punishment when the teams are lopsided. Out of the three days that I played online, I only had two matches that were decently populated with real people. When there are only five people (total) in a map and the teams break out with two on one side and three on the other, that extra person makes a world of difference if they're even halfway competent. (The maps are designed for far more than five people, by the way.)

Overall I think it's a pretty good value for $15 (especially if you haven't already played the first game) but I'm done with Prejudice now and don't have any intentions of coming back to the series unless the next single-player campaign is a lot more interesting than this one was.

Heads up that the Seattle Retro Gaming Expo is happening May 28 & 29. You can click on over to the official website here to find out the details, but if you're in the area you may want to think about popping in and checking it out.

The wife and I caught Thor in theaters last night, and if you ask me, it was well worth the price of admission.

I've never been a very big fan of Thor as a character, but I was more than a little familiar with the comics and felt as though the filmmakers did a surprisingly good job of translating the material. The actors showed a decent amount of depth for what they were given, the plot wasn't over-stuffed with too many half-realized elements, and the visuals were fantastic.

In fact, some of the battle scenes were pretty amazing. After seeing ridiculously buff actor Chris Hemsworth pummel some frost giants with his mystic hammer (and a little assistance from the special effects department, of course) I think I can say that this is the first time I really got a sense of Thor being truly godlike and fearsome in battle. Bad-ass, man.

While Thor wasn't the sort of film that made me re-examine my views on humanity, I was completely entertained from start to finish and enjoyed the performances, and for a movie like this, that's about all I ask.

(Also, huge props to the film for only making Hemsworth wear Thor's iconic winged helmet in one scene. It may look appropriately majestic in the pages of a comic, but there's no denying it was unbearably goofy-looking in real life.)