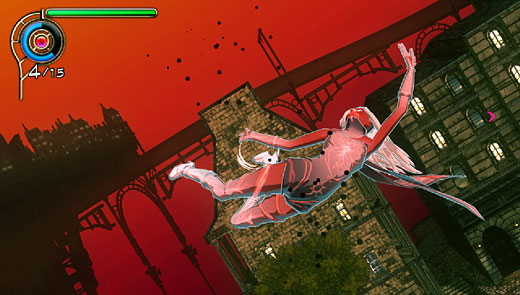 As an early adopter of an Vita, I was supporting Sony with my wallet and giving them the full benefit of the doubt when I ponied up on day one. I'm well aware of the dangers when you invest in a piece of hardware too early, but the PlayStation Portable (PSP) ended up being something that I got quite a bit of mileage out of, and I was confident that Sony would have learned from past mistakes. I mean, how could they not, right?

Well, after a great first impression with the unit, it's been sitting unused since two weeks after I opened the box. The lack of games I'm interested in has given me no reason to carry it around or even keep it charged, and I'm quite disappointed in the way Sony has let it lag lately.

I thought I'd have a reason to jump back on the Vita when @Jeremy_LaMont started talking about a new PS Mini that caught his attention, but imagine my surprise when I found out that Floating Cloud God Saves The Pilgrims was only available for PlayStation 3 or PSP!

I mean, let me get this straight… I realize that backwards compatibility might be an issue (or at least, that's the line that Sony keeps feeding to us when we ask about previously published titles) but what kind of asstacular thinking neglects to ensure that current releases are compatible with the current hardware?

It's an absurd state of affairs we're in now, and it strikes me as the worst sort of planning, even for a company notorious for not making the smartest business decisions. I guess that serves me right for having a shred of faith and Sony… I'll be sure that won't happen again in the future.

Now that I've gotten that out of my system, I realize that it's been a while since the last update. Let's do a recap!

In terms of review material, I just finished Prototype 2 from Radical Entertainment.

My full writeup has been submitted and should be up in a while. I won't keep you in suspense—it pretty much sucked. What made it even worse? I passed up a few other games that I could have done a review on in the hopes that this one would have improved on the original, but no such luck.

It's a real shame since I think the concept is great and the player's character is quite powerful in relation to the world he's running around in… catharsis via mass destruction is easy to achieve. Unfortunately, that kind of thrill grows stale all too soon, and what's left is an out-of-date open-world game that can't keep pace with the competition.

Oh, and before I forget, my review for Anomaly: Warzone Earth (XBLA) just went up.

My next review will be Minecraft on 360. I've never played the game before, so I'm coming to it completely fresh. I've heard of it, of course, and I generally had an idea of what to expect, but it's certainly something that I wouldn't typically play. As a writer, it's interesting to try and come up with ways to cover a game such as this that doesn't line up with my personal preferences…

For fun, I've been spending most of my free time (what little I have, anyway) on the iPhone. A recent discovery is Tower of Fortune, and I've been having a hard time putting it down.

Essentially, it's a micro-scale RPG with a hero trying to climb to the top of a tower to rescue his daughter. However, the entire game revolves around a slot machine mechanic instead of the usual turn-based or action formulas.

It's a little hard to imagine until you see it, but everything in the game requires a spin of the slots, including attacking the enemy, being attacked, earning experience, or earning money. Side trips to the local tavern are used to restore life and earn permanent buffs for the hero, and after beating certain monster types, better swords and equipment are awarded.

The graphic style is just as offbeat, with the entire thing produced to resemble an LCD display of the sort you might see on a Game & Watch unit, or one of those cheapy Tiger handhelds from the 90's. It's incredibly cute and charming, and although the bizarre mash-up of RPG and slots initially seems like complete insanity, it works.

I've heard it gets a bit grindy towards the end, but so far it's a big thumbs up to this one.

In other iOS news, @TimSpaeth and @Hargrada convinced me to take a chance on Ascension: Chronicle of the Godslayer. I just started last night, but it's essentially an electronic collectible card game very similar to Magic: the Gathering.

It's been a while since I played one of these, and I frankly, I wasn't all that jazzed at first. There have been a lot of wannabe CCGs, and I was so deep into Magic for so long that it's hard to wrap my head around any other game. That said, after about an hour with it, it started to click. Now, I think it's a pretty clever hybrid that really takes advantage of the electronic format.

I'm a bit of an art snob when it comes to stuff like this and the illustrations on the cards are pretty low-rent, but the formula of play is different than anything else I've come across. Also, it offers asynchronous multiplayer, and that's something I'm into these days… trying to coordinate schedules with friends is a near-impossibility, so any game that lets me "play" with others without actually having to play with them is great.

It’s a shame there’s so little worth playing on the Vita. While I’m not a big fan of handhelds in general (only got a used psp last year, played through maybe four games on it) as I quickly find it tiring to bend my neck and look at such small screens, I’d still love to give the vita a try eventually – once there’s the inevitable slim edition, a price cut and more than two games I’m interested in. So far, that’s Gravity Daze and Persona 4 The Golden. Really, it’s a shame. And about Prototype 2… can’t say I… Read more »

The inventory in the 360 version of Minecraft is more cumbersome, but crafting is pretty nicely streamlined once you get used to it.

I’m mostly annoyed by the lack of local multiplayer on SD sets. The only reason I bought it was so I could play with friends on the same couch looking at the same screen.

So, I am a little curious as to how the inventory management on Minecraft works on the the 360. It is fairly tedious even on the PC and involves a LOT of clicking and rearranging.

Also, I guess I enjoyed the first Prototype to an extent, and I am enjoying the second. It is better, but I still get that horrible feeling of repetition in the game. Which is unfortunate.