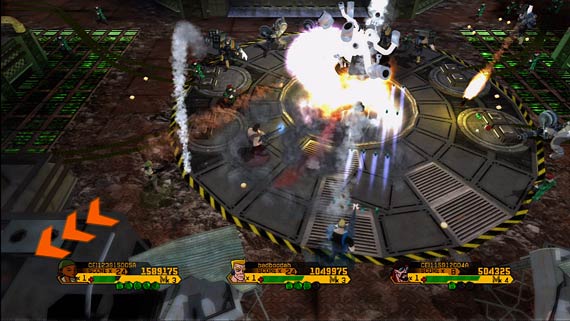 Parents should be aware that this game features a team of soldiers mowing down seemingly infinite numbers of enemy soldiers with guns, grenades, and rocket launchers. There are a few tanks and jeeps thrown in, but it's mostly human-on-human violence. It's not gory or bloody and the game in general has a very cartoonish aspect, but it still all about gunplay, so use your discretion. There is no questionable language and no sexual situations.

Old-school Capcom fans will find this game definitely worth the price of admission.  In my opinion, this reinterpretation is very faithful to the spirit of the original overall and it feels tight where it needs to, though the difficulty is a little too high when playing with partners.

Live Arcade players will likely find this came to be of a higher quality than most of the other action-oriented offerings so far. Solid and entertaining, my gut feeling is that the majority of people who are interested in this sort of top-down action will find it worthwhile.

Deaf and Hard of Hearing gamers will have no problems. There are no significant auditory cues, and everything you need to know is shown on-screen. It's fast, straightforward, and all about the twitch… no ears necessary.