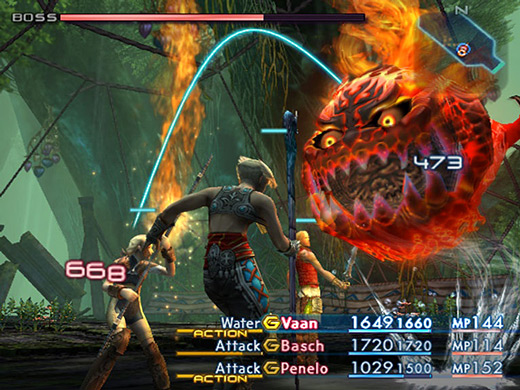 After the madness of the fourth quarter, I have a lull in the review schedule right now. It's nice to not be reviewing something for a change, so I'm plowing ahead with Final Fantasy XII. I'm about fifteen-ish hours into the adventure and still loving it. Loving it a heck of a lot more than I expected, actually.

The thing I like most about it is that it feels very far-removed from the "traditional" Final Fantasy experience—the biggest example is that the battles happen in the same area that characters travel through, without a screen-wipe transitioning to the traditional enemies-over-here, party-over-here setup. That kind of structure worked just fine back in the day (and still does on handhelds) but it just doesn't cut it for me when talking about a big-budget console title these days.

I'm also really digging the art style quite a bit. Although it definitely still has strong Japanese influence, there's a lot of Western happening too… especially when looking at mannerisms of the characters. From the start of the game to the point I'm at now, I haven't seen a single character have an over-the-top anime-style "waaaah!" moment, or anything of that sort. Don't get me wrong, that stuff has its place and I do enjoy it when I'm in the mood, but the very serious, mature orientation of Final Fantasy XII is pretty refreshing, especially in light of some of the stuff Square has done in the past.

Although I'm still early, there are a few things I'd improve. For example, I've hit a few places where it felt extremely far between save points. Fortunately, I've been mostly playing at night when I have the ability to sit for a few hours at a time and just play, but I doubt I'd be able to get away with that during the day.

I'm also quite disappointed that players can only have three characters in the party at a time. It's certainly not a technical issue since "guest" characters join frequently (equaling four onscreen simultaneously) so I have to say that was a bit of a bad call. In addition, requiring players to buy Gambit options (the rules that govern party AI) was another mistake. If the system is here to be manipulated by the player, I don't see that there's any benefit to withholding options. As was pointed out by a friend on Twitter today, Dragon Age had the right idea in giving players full reign over its system (nearly identical) from the start. At the very least, the options should have been released over time as the player became used to using the choices.

One other thing that irritates me is the way that the squares on the License Board (which allow characters to equip items or learn new techniques) are unknown until a player buys them. The only reasoning behind it I can see is that it forces players to purchase squares that may not be desired, resulting in the need to level grind in order to earn more points, thus delaying the player from actually getting the technique they wanted, and also increasing the amount of time/battles necessary for players to accumulate sufficient number of points. It's not terrible the way it is, but it feels very inefficient and a little cheap… there have been more than a few times when I spent my points on something that didn't turn out to be what I wanted, and that sort of thing happening doesn't seem very respectful of the player's time and effort, if you ask me.

Don't get me wrong—I'm not trying to take the game down a peg, I'm just a critic. Criticizing is what I do. Those issues are pretty minor in relation to everything that the game gets right, and like I said above, I've been loving what the game has been giving me so far. Honestly, if I'd known it was going to be this good, I would've played it a lot sooner.

In fact, it's fairly ironic that I'm just now getting around to Final Fantasy XII since the early word I'm hearing on the impending Final Fantasy XIII sounds like Squeenix did a total 180 and went straight back into cliché-land. We'll see…

Yep, that’s right as you exit the Ozmone Plain.

I managed to fumble through that fight with quickening abuse and make it to Arcadia, but my journey ended there as well.

[quote=Trent Fingland]I’m not sure where in the story you’re at, but I remember the need to grind scaling upwards quite suddenly once I reached a certain zone (Ozmone Plain, I believe). Here’s hoping you don’t have the same experience.[/quote]

That’s exactly what happened to me, although I think I was a bit further in as I was inside Arcadia when I stopped. The last thing I remember was fighting four super-powered versions of those little pumpkin/plant enemies.

I think assigning the design of the license board as something to force player grinding is a bit over cynical. FFXII has tons of incentives to grind (hunts, difficult-but-accessible high level areas, unique enemies, etc.), and I didn’t feel like the board was one of those. My reading of it was that it encouraged players to dabble with skills, equipment and playstyles that they wouldn’t normally bother with. After all, who’s going to mess around with hand bombs or daggers when the quickest path to the Excalibur is in plain sight? I will say that I think there will be… Read more »

I didn’t mind the License board, cause even though you couldn’t see what you would recieve each time you buy a block on the board, you would get a fair idea on what you would recieve based on the previous blocks you already have. At the same time though, I would often attain weapon licenses that would be a waste of time cause I could never find that weapon in the first place, unless I visited some faq that would tell me where to find it. Even then, sometimes I would have to be at a certain point in the… Read more »

FF12 was one of the two Final Fantasy games I flat-out did not like, the other being FF8. It started off really strong, as I was digging the story and I liked the combat system-not having random battles was a very welcome change. Then the grinding started. I really don’t like having to grind so much in a single player game just to get by, and non-shared experience between party members made it even worse. I didn’t use Vann hardly at all after getting my full party, so having to resort to him suddenly and realizing that he was still… Read more »

I was actually disappointed with XII. I don’t think it was a bad game, but I had extremely high expectations. Seeing how FFX is my favorite game of all time, I have extremely high hopes for XII, but unfortunately it just didn’t match in quality imo. I probably wouldn’t have been disappointed as much if I didn’t like X as much as I did, but I got bored with it half way through. However, talking about it has gotten me thinking about it so I think I’ll replay it and give it a second chance.