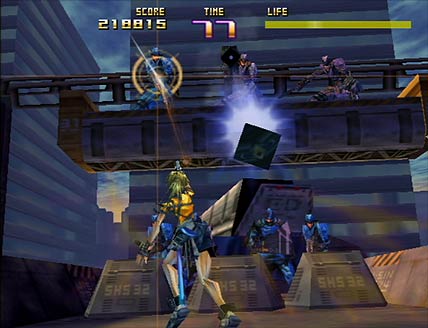 Since purchase, my Wii has seen very little action. Extremely little. The layer of dust on it is ridiculous.

When a few import titles made their way to the Virtual Console, I was intrigued.  My first purchases from Nintendo's offerings, I downloaded Sin & Punishment and Super Mario Bros: the Lost Levels.

Sin & Punishment: granted, I'm sure my reaction to this game would have been different if I had been able to play it back when the N64 was still a viable console. (So, basically two weeks after release then…) but playing it today?  Wow, what a mess.  I remember this game being touted at the time as one of the best N64 entries, possibly the best ever. I can see little glimmerings of potential, but after having hands-on, I'm going to chalk this one up to yet one more instance of importer-elite snowjobbery.

For starters, the story is absolutely incomprehensible.  I can't make heads or tails of it, and I could not tell you what the hell it was about. There's something about people sharing blood, one character turned into a giant Godzilla/Evangelion sort of thing, and there's lots of talk about getting revenge for friends while everyone stands around with tres-cool spiky hair. Every encounter feels completely random, and makes no narrative connection with anything else.

The action feels extremely basic. Trying to remember what games were like back then, I can't help but feel that Sin & Punishment would have still come off as limited and constrained as it does now. In most areas, the active character can only move left to right in addition to jumping or dashing to the side. The only weapon available is a pistol (unless you are at extremely close range, in which case the pistol doubles as a sword). There weren't any power-ups or alternate weapons that I could see. Tons of characters pile onto the screen, and you basically move a cursor around to shoot them while occasionally dashing or dodging left or right, out of harm's way.

All that stuff is bad enough, but trying to play this game with a GameCube controller is a nightmare. Movement (again, only L or R) is mapped to the tiny D-pad or the face buttons, shooting is the L trigger, jumping is the R trigger, and aiming is either stick. It took an extremely high degree of focus for me to get the character to do what I wanted, something that isn't really an issue in most games these days.

Super Mario Bros: the Lost Levels: well, I guess you really can't go home again.  I only played this one for a few minutes before getting sick of it, but from what I saw, I wasn't compelled to see anymore. The difficulty level seems to be a lot higher than the original Super Mario Bros although that could very well be my imagination. But I have to say, there's something intrinsically wrong about a bad mushroom that hurts Mario instead of helping him.  The very concept is offensive to me. With the imminent release of Super Mario Galaxy, I found very little entertainment in going back to something like this, the nostalgia factor being negligible.

As an importer of Sin and Punishment, who’s played the game through numerous times, your post makes me reflect and laugh (in a good way!). I completely agree about the story. It is hilariously bad and seems better suited for some crappy Sci Fi channel movie. However, I find the game enjoyable, though maybe a tad easy. As I previously stated, I have found it to be a game that can be replayed, even by today’s “standards”. But oh well, to each his own. As for the Lost Levels being overly difficult, I believe that was the point. In fact,… Read more »

I’ve always wanted to check out Sin & Punishment, and had planned to buy the Wii version when I had time to play it. Your comments make me hesitant, so perhaps I’ll hold off a bit. Thanks for sharing.