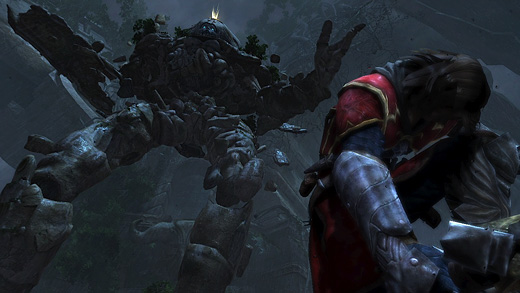 I'm trying to decide what to tackle next… No decisions have been made yet, so I'll probably just try a few random things I've downloaded and then go to bed. However, while on the subject, it does bring up the issue of 2010—specifically, that there's only about eighty days left in it.

I've mentioned several times on my Twitter feed that this is the first year where it genuinely seemed as though there wasn't enough time to play everything that I felt I should as a critic. I mean, I'm no stranger to the traditional fourth-quarter rush, but between the wealth of retail and DL releases, 2010 seemed to have more worthy (if not spectacular) games per month than I could possibly get to.

While I usually have to pack my play schedule a little tighter as each year draws to a close, I just don't see how it's possible to get to all of the "must-plays", let alone the "looks interestings" that are still on my list. The numbers just don't add up, and I have to admit that it feels pretty frustrating.

As an example, I've been comparing Game of the Year lists with a few people privately, and in each case our picks were almost completely different. I don't think it was necessarily that everyone had a radically diverging opinion, instead I think it had more to do with the fact that each of us had chosen different games due to time constraints and had simply failed to play the others. I really, really can't think of another year when that was the case.

So, what does all this have to do with you? Good question. Since there's so little time left before the necessity of crafting the traditional end-of-year wrapup, I thought I'd throw it open to all of you and see what the hivemind felt I should definitely play before December 31.

Below is a list of likely candidates, but I'm also totally open to other suggestions. If there's something you think I absolutely should see, I want to hear about it. Any system except PC is fair game (including DLC or Add-Ons) so dear readers, I ask you: What's an important critical play?

Potential Candidates for Review before 12/31:

I’d love to hear your thoughts on Metro 2033. I’m almost finished with it. It has its problems, but the story and atmosphere are extremely compelling and IMO smooth out the rest of the issues this game has.

For chrissake Brad, you own Red Dead Redemption. Go for it! The hype has died down, and there’s a potentially fun and zany zombie expansion pack on the way. Now’s the perfect time to dive in.

Don’t be shy about using cheats to get the final costume if you really care for it. I can see some of the side quests to get the final “Legend of the West” outfit pissing you off. All the other outfits are generally pretty easy to obtain.

Oh, oh, oh, I thought you were asking based strictly on your above list. Red Dead Redemption and Peace Walker are both so excellent, you have to play them sooner rather than later. Red Dead Redemption will just steal your soul from reality and place it in the old/not-so-old west. It’s a brilliant game that looks, sounds and feels awesome. Peace Walker just surprised the hell out of me. And believe me, I expected it to be very good. But once you get into the game a bit, and get a grip on the somewhat limited controls, it starts to… Read more »

Thanks much to everybody for the votes… I think it’s becoming pretty clear where the rest of my year’s going to go. ^_^ Crofto> Looking at Super Mario Galaxy 2, there’s definitely a million reviews out on it already. Thinking I might hold off there. Adam> Thanks for that breakdown… I like the way you think! Alv> I don’t play sports games at all, unless they have some weird fantasy/sci-fi twist. I just don’t enjoy them. Can’t get into them. Not many of the critics here (besides me) lean towards sports, either. Sorry! Coyls> Yeah, I know… I’m just about… Read more »

voting for Max and the magic marker and Light Trax.

…is if Brad plays it, it’s the last thing he’ll review in 2010. I’m playing it now, and a part of me regrets picking it up during the holiday rush, because the game is deep, and long. I never played the original, but I’d like to, because I’ve been given the impression that the story rocks a lot harder than this one. I am impressed with some of the characters, but the setting and art style scream “tired and played out anime cliche”. The story is pretty interesting so far, though. Overall, I think it’s a good game, but I’m… Read more »

Didn’t you make a blog post last year apologizing to SEGA for playing Valkyria Chronicles late? Didn’t you also mention that everything about it was a win?

Are you really thinking about not playing the sequel?

For a change, how about picking up a sports title? Now I’m not the biggest fan of sports games, but nevertheless it’s a hugely important part of the games industry, and the one meta-criticism of GameCritics.com is that it *never* reviews sports titles.

…because whether you love it or hate it, I’ll enjoy reading your review of it.

But seriously, it should be tops on your list presented here. It’s not going to change the world, but it’s the God of War I think you wanted, but never got. Although in all honesty, it does many things differently than GoW, and is it’s own game because of it. Anyway, that’s my vote.

Also, Super Mario Galaxy 2 probably wouldn’t be the most fun to review, but man oh man, what a SOLID and FUN game, even more than the first one.

I am enjoying Castlevania on the environments alone. It is simply beautiful to walk through.

Can’t say if you are going to like it. The demo doesn’t do it justice.

Castlevania: Lords of Shadow is an amazing game IMO, a much better game than the one it’s compared to so frequently in reviews: God of War 3. I recommend it with a caveat, though: if you review it, I’d appreciate you actually reviewing it on its own merits. I know that sounds obvious, but most reviews I’m seeing of this game are seemingly reviewing the game for what it’s NOT (another cookie-cutter clone of Symphony of the Night Metroidvania, because we obviously NEED another one after all the handheld games and the resurgence of the Metroid brand) and not what… Read more »

The essential three games I’d pick to review would be: Castlevania:LoS Costume Quest Metro 2033 Castlevania is Konami’s third attempt to see if they can do a 3D Castlevania.The game looks and sounds great but does it play great? I think that’s a case you’ll have to judge! Costume Quest is Double Fine’s game for the year and it’s a turn based RPG. Turn based RPG’s haven’t had an easy time this year with FF13 being linear and Resonance of Fate being hard to grasp, so this game might just be better than both! (Plus , hey, Double Fine. At… Read more »

Super Mario Galaxy 2 is definitely one you should play before the year is out. I’m surprised it’s taken this long!