Revitalizing a genre, one bullet at a time 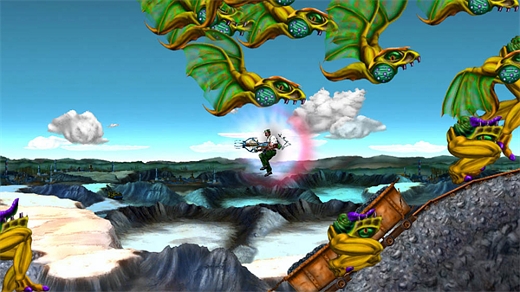 HIGH Setting the tone perfectly, the first character's weapon is a jet engine.

WTF All the bulbous sacks and juicy udders on the aliens are… unsettling.

It's been a long time since I've played a side-scrolling character-based shooter that was worth a damn. The genre hit its high point back in the 16-bit era, and has been heading steadily downhill ever since. Although there have been a few half-hearted efforts to recapture the magic in recent years, they've all been misfires one way or another. Until now, that is. Weapon of Choice from developer Mommy's Best Games has done more for the genre formerly owned by Konami and Treasure in one Community title than every other game combined since Contra: Hard Corps. If Hard Corps is familiar to you, then my meaning is clear. If you haven't played it, then trust me… that's pretty high praise.

Although the formula of taking a lone soldier and running from left to right while obliterating all opposition along the way will be known to many, it's not until playing Weapon of Choice that the amount of potential left in it becomes apparent. First impressions might lead one to believe that it's just another copycat, but my advice is to spend more than a minute with it. It's impossible not to see the amount of innovation going on here.

For example, multiple branching pathways is a concept almost unheard of in this genre, but  Weapon of Choice integrates it effortlessly and provides players ample reason to replay. Another interesting twist, instead of a set number of lives or checkpoints, Mommy's Best instead has a cast of operatives. When one gets taken down in the field, a missile carrying a new character is launched. Upon impact, it decimates whatever's in the area and introduces the replacement character on the spot. Going further, this new character can "rescue" the downed one. If the level is completed without another fatality, then the injured operative is restored to duty in the next level.

The sharp ideas don't end there. One of the most brilliant additions is an incredibly useful mechanic called Death Brushing. When an enemy or projectile gets close to an operative, the screen goes dark, a skull appears in the background, and everything ratchets down in slow motion. Taking this opportunity to pour more ammunition into the opposition or to simply jump out of the way, one-hit deaths can often be avoided. Any players who've ever lost life after life to brutal Red Falcon troops coming in from off-screen will appreciate this addition as the shining epiphany that it is.

Hitting every note perfectly in terms of mechanics, Weapon of Choice also nails it in terms of design and tone. In a nutshell, it's completely insane. Giant aliens fill the screen as each operative makes use of outrageous weaponry to roast membranes and crack exoskeletons. From jet engines spewing afterburner flame to flailing chainsaw blades exploding into shrapnel, any player who's ever craved using the big guns (and really, that's all of us, isn't it?) will find an immense amount of satisfaction and amusement in at least a few of the game's seven selectable characters. Oh, and one of the best boss fights ever? Look no further than the evil alien coffee mug.

Bursting with energy, enthusiasm, freshness, inexplicably bizarre random elements, and a clear love of the genre it builds upon, it's impossible not to crack a smile and just revel in the sheer amount of rightness Weapon of Choice can claim as its own. At this point, the phrase first and foremost in my mind is "more, please." Rating: 8.5 out of 10.

Disclosures: This game was obtained via paid download and reviewed on the Xbox 360. Approximately 3 hours of play were devoted to the single-player mode, and the game was completed 4 times. There are no multiplayer modes.

Parents: This game is not rated by the ESRB, but I would put it in the "Teen" category. Although the game is all about shooting big guns, the action is completely over-the-top and the only enemies are big, goopy, spidery, uddery aliens. It's fairly cartoonish, and there is no sexual content or questionable language.

Deaf & Hard of Hearing Gamers: You shouldn't have any problems. Although the action comes fast and furious, there's no real need for any auditory cues. If the aliens can see you, you can see them—keeping ears perked doesn't have much value. The dialogue in the game is subtitled, so there's no problems there, either.

Hi Dave! I designed those monsters. And everything else in the game. I’m sorry it’s just not your cup of tea, but a lot of people have actually enjoyed the style. I wanted to try a grungy style that I felt fit the mood of the game, and I realized from the start it might alienate some people. I’m definitely sorry it puts you off. I would really want you to enjoy the game, but sometimes my smarmy artistic vision gets in the way. I do hope you and others that aren’t sure about the art style give the demo… Read more »

Eh, i sort a liked the hand-drawn, grungy look to it. it was different, and gave it a different sort of “outlaw” energy. YMMV, but you should at least DL the free trial.

It’s good to see some updated entries for the side-scrolling shooter genre. I look at all of these Metal Slug Anthologies being released across all consoles and it tells me two things: 1) there are a lot of Metal Slug fans out there and 2) there are a lot of people still jonesing for some side-scrolling action. What I can’t see is myself playing this game though. While it does do some interesting things, it is an ugly looking game. All of the screens I’ve been able to grab for the game are just horrid. The character models look ok,… Read more »