WarTech: Senko no Ronde is exactly the kind of game that importers used to lord over domestic players back before importing was as common (or as obsolete) as it is today. It made non-importers like me crazy with envy when something with interesting robot designs, nice action-filled screenshots, and the promise of a unique game experience somehow didn't get brought stateside. I used to think US publishers were insanely out of touch with what would make a good game. However, the thing I learned over time was that despite what hipster importers claimed to make themselves feel good about their overpriced purchases, there was usually a reason that "awesome" niche titles were left overseas—all too often, the games being salivated over had gaping holes where the substance should be.

A bizarre hybrid of fighting game and bullet-hell shooter, players suckered into trying WarTech select one of several different combat mechs before taking on opponents one-on-one in a completely open playing field. Each character has a variety of attacks, though the bulk of them are some sort of projectile: bullets, lasers, missiles, and so on. 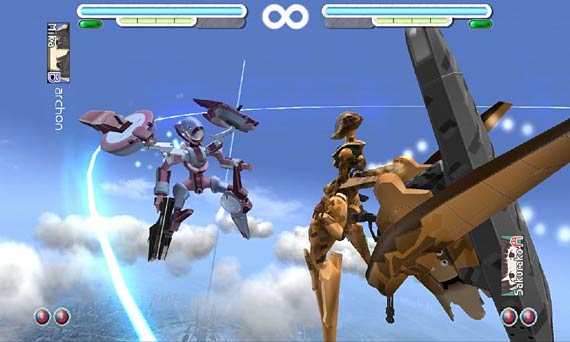 Once the match begins, buttonmashing ensues and the screen fills up with all sorts of crazy fire patterns, rocketing bombs, and deadly spinning objects to be avoided. For some extra oomph amidst the chaos, players can transform into what would be considered a "boss" character, if WarTech was a standard shooter. For example, one girl transforms into a giant sword, while the default character becomes a ship that could easily pass for one of the core fighters from Gradius.

Sounds pretty good so far, right? I thought so too, but after one session I walked away from WarTech, glad that I got it through an online rental service. I dropped it back in the mail the same day.

The biggest problem here is that it's just not interesting engaging to futz around, dodging swarms of bullets over and over again. WarTech differs from a standard shooter in that there is no "level" to progress through, and no real patterns to learn or avoid. There's no orchestration to the madness…like cogs spinning without their teeth finding a fit and engaging, there's a lot of things going on but no purpose.

The interstitial content supporting the main event screams "throwaway anime trash" at every turn, the poor artistic values failing to tie everything together. Character designs are hyper-feminine, making it almost impossible to tell the boys from the girls. The story mode is hopeless gibberish, making less than no sense and presented through still-pictures and incredibly hard-to-read text. (Is there some unwritten law for the 360 that requires all scripting to be tiny and illegible?) 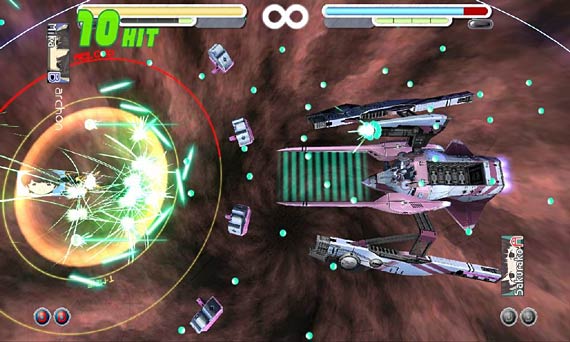 The character balance is questionable, with certain robots possessing attacks that clearly dominate over the others, and the single-player mode can be completed in a matter of minutes. Despite such a quick finish time, WarTech feels so shallow and uninteresting that there's little motivation to get the most out of it. Mash, dodge, fill the screen with bullets and then do it again…there's nothing else going on here. Everything about the game hovers around an original PlayStation-level of complexity (it has a strong Psychic Force vibe, actually…anybody remember that "gem"?), and I'm willing to bet that the graphics on display could have been convincingly achieved on a PS2.

WarTech: Senko no Ronde is a trite piece of airy piffle with nothing meaty to recommend it. It's the perfect example of what would have been accurately described as cheaply-produced import bait five or ten years ago, and I'm honestly surprised that someone gave it a green light for domestic release. I could possibly imagine it being a sketchy release for $10 on Live Arcade, but putting it out as a full retail product is someone's idea of a sick joke. Rating: 3 out of 10.

Thanks very much for your comments. While we may disagree on the game, I absolutely appreciate the fact that you were able to discuss the issue and make your points in a sensible and courteous fashion. I wish every comment we got was like yours.

My opinion on the game hasn’t changed, but I am very glad that you took the time to share some words. = )

While I do agree with some of your points I believe that this review is somewhat one-sided. True, Senko No Ronde is a game with many flaws, but it brings an interesting spin on a very niche sub-genre that has been floundering since the lukewarm reception of Virtual-On Marz. Perhaps it simply is that this is not your ‘type’ of game, as a lover of both Shmups and of (heavily) mechanic based VS fighters I can appreciate this game and overlook its flaws. True, some of the character designs and plot elements are grating, but complaining that a Japanese game… Read more »