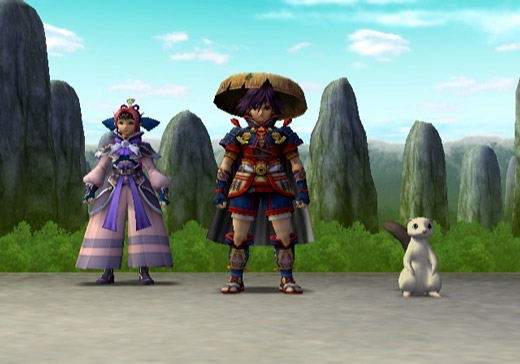 I've been spending most of the last two days playing Shiren the Wanderer on the Wii.

If you've been reading this blog for while, you may remember a week or two when Shiren on the DS (A.K.A. Mystery Dungeon) was all I was talking about, and for good reason- it was fantastic. Thanks to the great people at Atlus, people who enjoyed that title as well as those who have yet to discover its charms will now get the opportunity to continue the saga.

I'm not going to spill too many beans since I am working on a full review, but for those of you who aren't familiar, Shiren is in the niche "Roguelike" genre. Basically, the meat of gameplay is dungeon-crawling in randomly-generated levels while picking up and using whatever weapons, equipment and items get dropped by enemies or found in rooms. Through tight rationing and clever management of resources, the end goal is making it to each dungeon's exit—easier said than done, though, since the difficulty of these games tends to be quite steep, and one of the hallmarks of the genre is losing all equipment and being reset to level 1 upon death.

Yes, in most cases it actually is as harsh as that sounds.

Not so in this Shiren, though. Although traditionalists may cry foul, players do have the choice of keeping their levels and items upon death—the only penalty in such case would be reversion to their most previous save. In the Roguelike genre, that is a HUGE concession towards players who might not have the patience or willingness to grit their teeth and bear the pain. Honestly, I see this as a smart and necessary maneuver given today's landscape, and I'm glad the choice was made.

More on Shiren the Wanderer later. 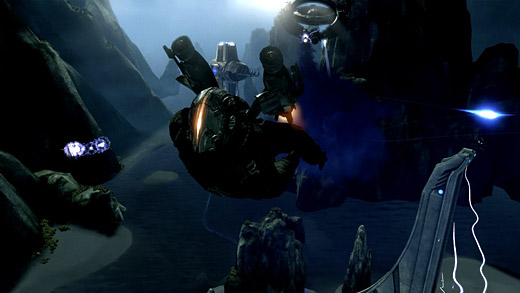 Just before starting Shiren, a good friend and totally decent human being hooked me up with a copy of Dark Void. (Thanks, man! You know who you are.)

In case you missed it, I interviewed the development team a little while ago, but basically the title was put together by the people behind the supremely awesome Crimson Skies (Xbox) in conjunction with Capcom. All about a guy fighting aliens with a jetpack, Dark Void seemed like there was no way it could go wrong. I mean, based on these elements, I would've put any amount of money on it being an absolute home run. Dev team with flight experience? Goopy aliens? Capcom? JETPACK? I mean, it's a WIN right?

In total, I think I spent around three or four hours with Dark Void, and that was three or four hours too many. The scripting and characterizations were awful, level designs were uninspired, far too much time was spent in subpar on-foot gunplay, and the jetpack itself felt slow and dull… not at all the kind of breathtaking, seat-of-your-pants action one would expect.

Although I'm quite disappointed to report it, Dark Void is one of those sad games that really doesn't have a single thing to recommend it. It was so bad, in fact, that I could not force myself to keep playing and had to abort plans for a review… I couldn't justify spending the time.

In other disappointing news, I finally got around to playing the multiplayer Aliens vs Predator (360) demo which is now available on the Xbox Live Marketplace.

I really hate it when developers put multi-only demos up for many reasons, but primarily because multi modes don't give the player any sense of what the 1P experience will be like (*koff*Bionic Commando*koff). I rarely play multiplayer modes unless they are story-based co-op and have an ending, so in general, I don't glean much from setup like this. Still, being the Aliens/Predator fan that I am, I gave it a shot.

Wow, talk about unimpressive. The only mode available was a standard deathmatch that apparently could not be launched with fewer than eight people. It took me several attempts to actually get into a game, and once I got in, there wasn't much to keep me.

Playing the role of an alien the first time, it took me a little while to get the hang of the controls. I probably could've done it a lot sooner if I wasn't being blasted to xenomorph bits every few seconds, but I eventually figured it out and was not thrilled. It was very disorienting to be able to crawl on the walls and ceilings, and I couldn't help but think that there could have been a smoother way to transition the camera during surface shifts. Besides that, I felt quite underpowered. The human marines were able to easily pick me off at a distance, and the few times I was able to close in, my claws and tail weren’t nearly as lethal as I would have hoped. It also seemed as though the alien should've been able to run a lot quicker than it does, given that it's limited to melee attacks. In any event, that was a spectacularly un-fun session and switching to being a predator wasn't much better.

This is definitely a case of a demo cooling off my level of interest in the full title, and as of tonight, I've downgraded it to my "check it out when it's $20" list. An early leaked Game Informer review (I love you guys, seriously!) pegged the game as a 5.75/10, so apparently this demo is at least partially representative of the full game’s quality…

My last game bit for the night, if you haven't already come across it, I’d like to give a shout-out to a blog I've been following pretty regularly as of late—Peter Skerritt’s Consoleation. Pete does a great job of taking a look at the business side of the industry, and he’s been totally on-point when it comes to the changing power dynamics between publishers and consumers. What he says on his blog about DLC and online transactions lines up almost exactly with how I see things. If I didn't know better, I'd swear the guy has been reading my mind… If you've got the time and interest for another blog dealing with intelligent game talk, give Consoleation a shot.

But for someone interested in jumping in to Shiren, would you recommend the DS or Wii incarnation?