Spikes… so many Spikes… 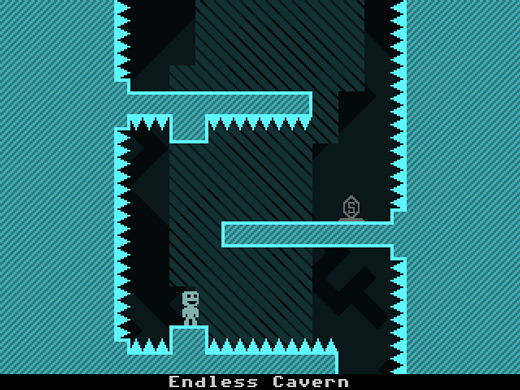 LOW The difficulty of certain rooms is hateful.

Frequent readers of this site will know that it's an extremely rare occasion when I will play a PC game, let alone review one. However, I do make the odd exception once in a blue moon under the right circumstances, and one of those circumstances is when Terry Cavanagh releases a new title. Made available for purchase just a few days after this review was written, Terry's latest is titled VVVVVV, and it's a cracker.

Cruising through space, a ship containing an 8-bit crew runs into trouble with a rogue dimension. All hands except the captain are scattered throughout the game's world, and it's up to the player to reunite them. However cute it may be (and it is) this isn't a story-driven title by any means… no, it's all about the gameplay.

VVVVVV's world is broken up into discrete rooms, some coming together to form "levels" of a sort, while some are simply meant to be traveled through. Although the experience is built on a core of platforming, the twist is that rather than jumping, the main character can flip gravity itself.

With just a push of the space bar, the captain will find himself hurtling upwards to land on whatever ceiling waits above. Hit it once more, and gravity is restored to what we think of as normal. The concept is simple enough to grasp immediately, yet Terry has found ways to twist and spice the formula, keeping it fresh and challenging throughout. Moving platforms, warp zones, trampoline-like lines suspended in space, wraparound levels that nearly induce vertigo, and of course (as the title might suggest) lots and lots and lots and lots of extremely lethal spikes.

Although relatively short, it must be said that the difficulty of a handful of sections is hair-pulling/pant-soiling. Players with a low tolerance for frustration should be warned. Part of the challenge comes from a little slipperiness maneuvering the captain (especially laterally), but mostly it's due to narrow margins for error and… spikes. Oh, those spikes. I don't say this to scare anyone off, though—the ideas and energy on display are wonderful, though they are somewhat tempered by a bit of sadistic brutality.

Sporadic difficulty notwithstanding, it's certainly a credit to Mr. Cavanagh that a project with VVVVVV's basic graphics and simple controls can feel so completely energetic and entertaining. Much more than it initially appears, I was quite glad to have spent time with the title, and eagerly look forward to what Terry will be cooking up next.

Something without spikes, perhaps. Rating: 7.0 out of 10.

Disclosures: This game was obtained via publisher and reviewed on the PC. Approximately 2 hours and 43 minutes of play (along with 896 deaths) were devoted to the single-player mode, and the game was completed.

Parents: There is no questionable language and no sexual situations. As far as violence goes, it's a fact that the player's character will die over and over and over again, impaled on spikes, but just look at these graphics… something so cheery and colorful is totally harmless any way you slice it. The game will likely be far too difficult for most children, but it's in no way harmful.

Deaf & Hard of Hearing Gamers: You won't have any issues. All dialogue (what little of it there is) is presented through text, and there are no auditory cues necessary for gameplay. Play it without fear.

Deaf people might have a minor issue: one of the best aspects of thus game is the soundtrack.

Yes. Absolutely. No question. I had the same misgivings about buying a 3 hour $15 game, but after completing it twice and spending countless time doing the time trials and in the super gravitron, I have to say this game, even at its current price, is worth the cut. The fact is, this game becomes so addictive because you simply get better. You get better and better, you get closer and closer to what you’re aiming for, and even if you don’t achieve it within the first 1000 tries, it feels really good to experience such progress. And there’s so… Read more »

This game is best played as a team with someone else I think. When you’re frustrated, just switch and enjoy until you’re ready to give that Veni Vidi Vici another try. The best part of this game, and I mean best by far, is the Super Gravitron minigame unlocked with the secret lab. I’ve been showing this to a ton of friends, and most are addicted. Everyday we claim a few more seconds, and the one minute mark, that, at first, seemed utterly impossible, is now a remote possibility, having broken the 30 seconds bar. If you haven’t tried it,… Read more »

Look at it this way. If this game came out during the Speccy era it apes, it would cost about $60-90 in today’s dollars while supplying more entertainment at a higher quality than typical games of that era. I think it’s a bargain several times over. I think the real problem is threefold. First, today’s gamers have an expectation for all games to eventually drop in price and they simply won’t buy one until they think they are getting a deal. It’s a disturbing trend for anyone selling games today. Second, so many poor quality indie games are given away,… Read more »

Thank you for your honest response, Brad. I’m sure even Terry would appreciate your sincerity regarding the price. Pricing is a rather inescapable factor nowadays.

Hey Matthew. You ask a hard question, but I’ll be straight with you. I love Terry and his games– the guy’s flippin’ brilliant. I enjoyed VVVVVV as well, there’s no question there. But is it worth $15? If I was to give an honest answer, I’d say that $15 felt a little on the high side for me. If it was $10, Id say go for it, no hesitation, but that extra $5… YMMV of course (and I hope I don’t incur Terry’s wrath for saying so) but in this economy I’d say it’s priced a little too high. =… Read more »

Based on your review, I checked out the demo. I just got done playing it, and I enjoyed it quite a bit, but I’m wondering if you feel that the relatively short game was worth the asking price of $15. I know some “indie” titles have those prices as kind of “support independent game design” fees more than as expressions of the game’s supposed value, but $15 is still $15 if you know what I mean… and I’d like to go into a purchase knowing that the money will be well spent.