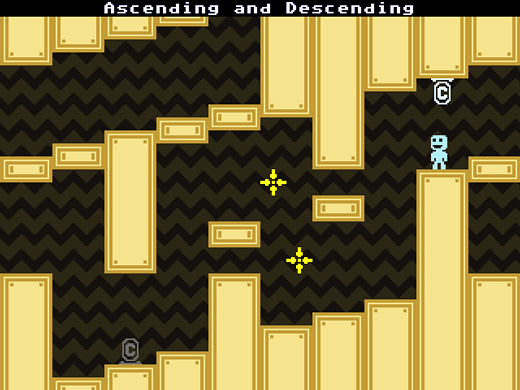 Although my official review hasn't gone live yet, Terry Cavanagh's VVVVVV is now available for sale, and after spending a few hours with it, I've got nothing but good things to say about it.

I talked a little bit about it in the last post, but basically, VVVVVV is a mind-bending platformer where the hook is that the player's character has the ability to reverse gravity instead of jumping.

The graphics are simple, yet they serve the simplicity of the gameplay perfectly. The music is to 8-bit heaven, and there are a number of interesting twists and concepts on display in the game that make this much more than it initially appears.

If you go to the sale website, you can purchase the full version for $15, or try a demo for free. Such a guy. For those who haven't experienced any of Terry's other games, you can check out his past works at his site, Distractionware. Try 'em.

In other news, last weekend turned out to be a little busier than I expected, so I didn't get nearly as much done as I'd planned. However, I did find some time to squeeze in a little more Divinity II: Ego Draconis in between the baby's naps, and it's only been getting better and better.

I'm half asleep at the moment so I'll save most of my endless gushing for a later post, but let me just say that this title has turned out to be far, far, far better than I had ever expected. The variety and types of quests are superb, there's a very dark sense of humor on display in the writing, the voice acting and music is great, and the complexity of the game's design overall is just stunning.

Although it doesn't have the in-depth dialogue trees and amount of influence over the plot the way BioWare's games do, it's certainly strong enough to hold up by comparison. It's a bit of a slow burn in the beginning and takes a few hours to really unfold, but if you give it half a chance, it's easy to see that it really is that good. Even better in some ways, and that statement is coming from a true dyed-in-the wool BioWare fan.

If you count yourself as someone who appreciates deep, complex and challenging Western-style RPGs, this is one you absolutely can't afford to miss.