If you read this blog even occasionally, then you probably know that I'm not much of a PC gamer. However, I do make the occasional exception for certain titles. This evening, one of those special cases found its way into my hardware: VVVVVV by Terry Cavanagh.

Although I had planned on doing more in-depth coverage of the game tonight, after some consideration I decided to hold off until I'm completely done. However, I will say that it's a pretty superb little title, and I'm enjoying the heck out of it.

In a nutshell, it's basically a platformer done in shades of Metroidvania, just without all of the item-collecting and combat. In VVVVVV, the player controls a small character that can move either left or right. The twist is that instead of jumping, this character can reverse gravity… It's a concept simple enough to grasp immediately, yet so far (nearly done, but not quite) Terry has done some amazing things with it. I'll save further comment on the game for the moment, but I will say that it's a credit to Terry that something with such basic graphics and simple controls can be so utterly engrossing.

If you need to know more right now, you can read my original interview with the man himself on one of his other works, or you can go check out Terry’s site, Distractionware.

Definitely more to come on this.

In other games news, I've started a nearly-unknown title on the 360 called Divinity II: Ego Draconis. Very few people (to my knowledge, anyway) have heard of it, and of those that have, most seemed to have dismissed it out of hand. For Western-style RPG fans, doing so would be a mistake.

To be totally fair, the demo currently available on Xbox Live cannot possibly do justice to the depth and exploration that the full version contains—you don't even begin to scratch the surface of the experience for at least the first couple of hours. Also, it’s a sad fact that the game's technical side has a number of issues that will probably discourage most people giving it a quick peek. The framerate isn't the best, there are some weird graphical hiccups and screen tearing, and in general, the visuals are a few notches behind what most people probably expect these days. However, Divinity II is a perfect example of not judging a book by its cover. If you can get past the graphics, there’s an immensely enjoyable adventure to be had.

The gist of the game is that the player is an apprentice dragonslayer out to earn their stripes. There’s only one dragon left in the entire kingdom, and you’re part of the group after it. 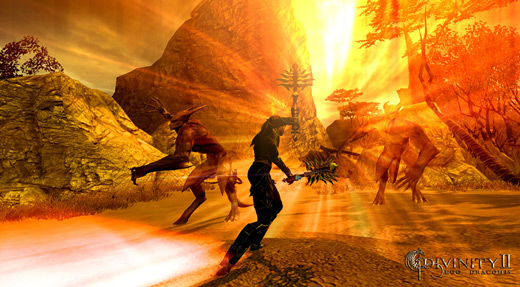 After a brief training/tutorial, the player's character is set loose in a huge expanse of terrain to explore at will. The first small village to be discovered contains a surprising number of quests, but there's nothing to stop you from simply picking a direction and seeing what lay ahead.

Those that have seen or read up on the game probably know that its big hook is the ability to transform into a dragon and fly throughout the world with very little restriction. At the moment, I'm probably somewhere in the neighborhood of 6 to 8 hours in and haven't yet earned the ability to transform, but I'm not complaining. Outside of the plentiful quests, there have been quite a few dungeons to explore and simply trekking through the terrain Oblivion-style yields a great number of interesting things and surprises.

Probably the most important thing to be said about Divinity II is that the style of play is kind of old-school in the sense that there's essentially no handholding whatsoever. Although you have a map, most icons on it don't appear until you've already discovered them firsthand. In the dungeons there are no glowing outlines or sparkly halos around key items, and it's entirely possible to stumble into a goblin camp and get overwhelmed just a few steps away from the relative safety of the beginning location. Oh, and be sure not to start fights with anyone unless you're really, really positive you can kick their ass.

I don't mean any of this to sound negative because it's not—the amount of freedom and sense of achievement that comes along with this kind of adventure is significant. However, gamers raised on more recent titles will find all this to be a shock to the system. The openness, the lack of specific direction, the responsibility on the player's part to not only wield sword and shield, but also to suss out clues and put things together detective-style… these are not things that you see on consoles very much these days, and in my estimation, it's pretty damned refreshing to see someone attempt it while putting in as much effort as the developers obviously have.

Graphic problems aside, this is an absolute quality title. Any fans of BioWare’s work would be wise to check it out and give it a chance to unfold.