My good friend @AlexRubens (freelance journo and voice from from the "Underdeveloped Characters" podcast) is hosting a 24-hour game marathon in order to raise funds for charity. He's a good guy, it's a good cause, they've got several big-time sponsors set up and will have a live feed going during the event. If you can spare a few bucks or support them in another way, please do so. 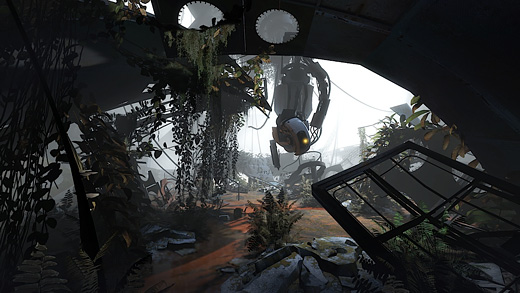 I polished off Portal 2's single-player mode earlier. The campaign started losing its luster for me somewhere in the neighborhood of Chapter 6 or 7, and after that point I found that I needed to break up my play sessions into no more than three or four puzzles at a time to avoid burnout/boredom. Consequently, it took me a lot longer than I had originally anticipated, but it's done now.

I'm considering doing a second opinion after I see what Richard Naik has to say in his main review, but in general I'd say it was a pretty good game, not necessarily a great one.

Downsides? The campaign is a little too long for my taste… I think I would have been a little happier if the game had ended a couple of hours sooner than it did. Some of the puzzles are fairly annoying, as well. I don't mind trying to suss things out, but when I'm not clear about what my goal is or when the developers start hiding portal-able areas in hard-to-see places, enjoyment starts getting stripped away.

Upsides? The monologues are great even if having a silent protagonist is not. There are also a handful of really neat, "wow" type moments—they usually come when the game is off the rails and breaking away from the room-by-room puzzle formula. Also, portals are just fun.

Overall, I would have liked a shorter campaign that was a little more free-form. Having a portal gun is such a powerful, exciting thing, it's a little disappointing that players don't really get to go hog wild with it very often. In fact, that's a problem I think many games suffer from. It's always a shame when a developer comes up with a really neat, interesting mechanic and then proceeds to leash it down and throw a bunch of limits on it.

Another factor to consider is that much of the first Portal's appeal (for me, anyway) was that it was such an unknown quantity and a real surprise. Portal 2 changes up its formula a little bit, but it really doesn't deliver anything that wasn't expected and hews a little too closely to the structure of the first game. I'm glad I played it and I do think it is a very good game in general, but I'm glad it's over and I really don't see myself ever replaying the campaign. The wife and I will probably take a stab at the co-op, though. 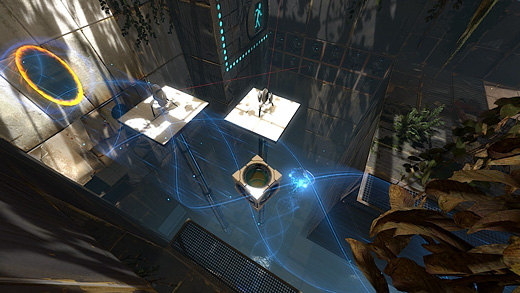 Also, one final note: I'm sure a lot of people will see this as pure heresy, but after a few hours of doing puzzles I was starting to crave a little more action. Although I'm not an FPS nut in general, I couldn't help but imagine what combat would be like if the character was equipped with both a portal gun and a more traditional piece of firearms.

I mean, the possibilities are pretty amazing… imagine zipping through a portal across a map to take potshots at an enemy, jumping back through another portal and instantly switching back and forth between being protected behind cover and sniping from a lofty perch point. I'm definitely not saying that the game needs to evolve into just another shootfest, but I definitely feel like there's a lot of potential going untapped.

Both the Fancy Pants Adventures and Section 8: Prejudice launched on the various download services this week, but review codes never appeared despite requests. Both of these titles were pretty high up on my to-check-out list, but I will be putting them on the back burner for now. Shame.

Started The Third Birthday on PlayStation Portable today and it really didn't grab me. I enjoyed both of the Parasite Eve titles back in the day so I had been looking forward to this but something just isn't clicking. I am extremely early in the game, though, so I'll probably put another hour or two in before I make up my mind. Thanks (maybe) to @ChrisGreen87 for motivating me to push on.

Caved in to personal weakness and picked up a copy of Mortal Kombat on PlayStation 3. I have to admit that getting Kratos as a playable character was actually a negative for me, but after all the votes were in, it seemed as though most of the people in my Twitter feed were going to be playing on Sony's machine. In this particular case, that's okay… I prefer the Dual Shock for fighters, anyway.

I haven't had much time to actually play it, but I did go through the opening segments of the story mode and I was really liking what I was seeing. Essentially, the developers are having the player rotate through each character for a few rounds and tell quite a bit of Mortal Kombat backstory while they're at it. It's a great idea, and one that I would like to see more of.

3rd Birthday is such a mixed bag – great graphics, solid gameplay, yet a mess of a narrative. Aya’s charater change IS explained in the last 10 mins of the game though – although the cause was pretty obvious at about the halfway mark imo.

Of course, all this was covered in a certain other podcast back in Feb! 😉

Yep, that’s pretty much how I ended up feeling about Portal. It definitely starts to drag around Chapter 7, although the final chapter was still fun, and the ending was delicious. Very entertaining, but not that amazing. Also totally agree on 3rd Birthday. I came up to Chapter 3 before deciding to put it down indefinitely. It’s not bad per se, it’s just…uninteresting…I guess. A shame since the first 2 were very enjoyable. I also hate the “Other M”-ification of Aya Brea. Another solid videogame heroine turned into a whiny emo little b*tch. Maybe I’ve been spoiled by 2010 too… Read more »