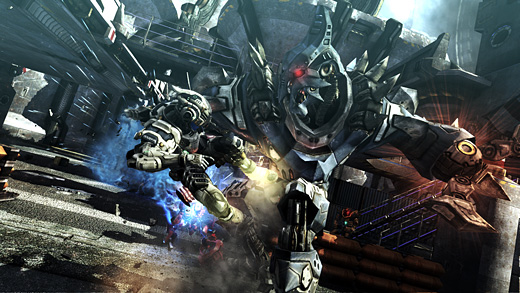 HIGH Taking down two giant robots at once with barely a scratch.

LOW Overheating the suit while surrounded by enemies.

WTF Why do weapon levels get reset when replaying stages?

I admit it. I'm really not the biggest fan of Platinum Games or their former incarnation, Clover Studios. I didn't care for Infinite Space, got bored with Madworld, and Bayonetta was one out-of-control hot mess. But what about their latest title, Vanquish

? While it's got the same eye-catching sense of style that is common to the studio's work, something deeper has been created here… something amazing.

For the first time in this developer's history (in my view, anyway) the gameplay is equal to, if not better than the visuals. With both form and function pushed to equally stellar standards, I'm quite pleased to say that what Shinji Mikami and Platinum have created is pure brilliance. While the third-person shooter core Vanquish is built on is certainly comparable to others in the same genre, a world of difference is effected by the number of smart decisions, clever tweaks and brilliant designs.

Quite obviously, the hook to Vanquish is the super-suit main character Sam Gideon wears. It provides him a fair degree of self-replenishing armor, gives him the ability to dash around the environment at a high rate of speed, delivers devastating melee attacks, and also grants him heightened reflexes akin to slow-motion bullet time. It's a pretty amazing piece of technology and gives the player a wealth of options during each encounter, but the most brilliant thing about it—and really, one of Vanquish's best ideas—was that all of these things are powered by one energy meter.

Rather than asking the player to keep track of a separate resource for each ability or letting them run wild with unbalanced powers, Vanquish becomes a fast-paced game of situational strategy. Is it more important to boost away to a safe location, or would it be wiser to deplete the energy bar for one crushing melee kick? If the suit's energy is tapped for precise slow-motion shooting, will the player be prepared to stand their ground while the cooldown process runs its course? The decision to make all of the special abilities holistically linked may seem limiting at first, but I found it to be incredibly refreshing and intelligent, turning what could have been a spazzy, twitchy mess into an exercise in elegant combat orchestration. 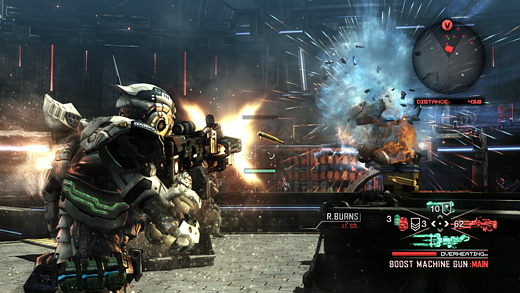 Equally elegant was the way each part of the adventure was created to blend seamlessly into the next. Rather than the usual level-by-level progression, the entire mission feels like one continuous journey from the crash-landing start to the final, fateful encounter. It's certainly true that the game is divided into discrete areas, but after the game advises the player of their score with a quick tally, the next section picks up exactly where the last left off. The consistency and flow of this technique gives Vanquish

an unusual level of coherence that I would very much like to see replicated in other games.

Building on this coherence is a staggering number of jaw-dropping setpieces that manages to keep the game's running time fresh and engaging (literally) from start to finish. Some of these sequences in the game are absolutely stunning; things like an enemy-laden train doing a barrel roll over the player's own, or jet-dashing across a giant section of highway that's crumbling away, bit by bit. Vanquish's ability to keep the player in a near-perpetual state of awe is virtually unmatched, and any game that tries to outdo the pulse-pounding pace on display here has an unbelievable amount of work cut out for it.

The other, slightly less explosive aspects of Vanquish are just as interesting, and serve to show that the developers took the time to carefully go over everything, leaving no part stock-standard.

For example, the player's gun can morph into different configurations, and is upgraded through a natural and non-intrusive system that doesn't distract from gameplay. The story (usually the first casualty in a game of this nature) was just the right mix of serious, irreverent, testosterone-tinged, and political. The characters each fill the role he or she needs to, and the writers (wisely) never stray into irrelevant emo backstory or wild tangents that subtract from the immediacy of the mission. The frequent cut-scenes gave just enough detail to keep things moving, but never get bogged down with self-important hot air—a perfect blend.

If you had asked me what I expected out of Vanquish based on the demo, I never would have guessed at the kind of brilliance on display here. Every part of Vanquish feels balanced and correct, created with deliberate purpose and vision. Craft of this kind demands attention. In fact, the only bad thing I have to say is that I was disappointed there wasn't more of it, and for me, that's an extremely rare feeling, indeed.

My highest possible praise goes out to Shinji Mikami and Platinum Games, and my sympathies go out to every third-person shooter that comes after Vanquish

Disclosures: This game was obtained via publisher and reviewed on the Xbox 360. Approximately 7 hours of play were devoted to the single-player mode, and the game was completed. There are no multiplayer modes. Titan Gel http://titangeles.com

Parents: According to the ESRB, this game contains blood and gore, intense violence, and strong language.  While I didn't find this game to be particularly bloody or gory, the level of violence is definitely intense. Gunfights are hot and heavy, and will likely be fairly overwhelming for younger children. There is also quite a bit of salty language during the adventure. It's all entirely appropriate (and even well done) given the subject material, but it isn't fit for little ears.

Deaf & Hard of Hearing: You shouldn't have any difficulties. There is an on-screen map detailing enemy locations in real-time, and all spoken dialogue is accompanied with subtitles. In addition, there are also several visual cues on the main character which relay important information, so in my experience, I found everything to be clearly discernible and without any auditory barriers.

Hey CM, thanks for your comment. Also, if you have any feedback as to how we can improve the D/HH section, please let us know! = )

Thank you for responding to the various comments. I especially appreciated your insight as to whether the game is worth sixty dollars.

Also, as a deaf gamer, I read the reviews on this site because of the separated section on deaf/hard-of-hearing playability. This might seem like a “pain in the ass but gotta do it” part of your review duties, but trust me, you are worshiped for it.

Replying to a bunch of stuff…. Jeff: >>The script was abysmal, imo. While I wouldn’t have wanted “emo” characters per se, I would have wanted someone with more personality than these bland gruff talking meatheads. By the time the game was over I felt like I literally knew nothing about anyone in it other than they’re determined “to carry out their mission.” How heroic. And don’t get me started on the Samus look-alike who does nothing but stand around and gives intel in a scantily clad uniform. But see, that was what I liked about it. These guys are on… Read more »

Jeff I agree, more wackiness ala God Hand would’ve been welcome. But then again, look at how successful that game was (unfortunately). There’s still some zaniness in the story. Dancing robots, some funny, out-of-place vulgarities. Plus it all sounds hilarious in slow motion. Rob, I respect Jim Sterling’s opinions, even on Vanquish, and I hate to sound like a defensive fanboy about it, but I think Jim was just “playing it wrong.” It’s a bit similar to IGN’s 3 for God Hand. I’d hate to speak for Brad, but I think he’d agree. You can play Vanquish like a cover… Read more »

1) Both you and Jim Sterling seem to share some common ground in your reviews from time to time. Why do you think you disagreed so completely about this title?

2) In your Enslaved review, you made the point that the shortness and ease of gameplay diminished the experience somewhat. Is Vanquish better because it’s more involving, even though it’s shorter?

It’s not so much that I was taking the characters seriously, but rather that it wasn’t funny enough to be funny or serious enough to be serious. It ended up just feeling bland and cliched as a result.

Conversely, I loved Mikami’s former God Hand which is as out there as anything I’ve played. I wanted more crazy nonsense like that in Vanquish.

The biggest mistake you can usually make with a Shinji Mikami game is to take the story seriously. Although the characters were archetype meatheads, I saw them as clear parodies of Solid Snake and Marcus Fenix. I mean, there’s a character named Shinji Mikami for crying out loud. Now whether they are effective parodies is another discussion, but to criticize the characters for being shallow is another thing. I don’t think they were ever created to be deep in the first place. It was a bit talky though. More cutscenes than I would’ve liked for the game. Anyway, great review… Read more »

[quote=Jeffrey Matulef]I also didn’t care for melee attacks using up your power. The cost to benefit ratio just seemed too high to use them, so while I experimented with them from time to time, I never found them useful. Did you discover otherwise?[/quote] I find them very useful. True: many of the larger enemies don’t die immediately from a melee attack. However, they do receive large damage and often get knocked back and are stunned afterwards. Especially when the melee attack is combined with the slide. Slide onto an enemy -> Kick -> Empty clip in weak spot of stunned… Read more »

Hey Brad, After just wrapping up Vanquish not but an hour ago I have to say I’m in almost complete disagreement with you here. For one, I found the game to be just plain ugly. With the exception of one forest area, the entire game was made up of grey metal corridors that fell completely flat with me. It never felt like a city where people lived, but rather shoddy soulless sci-fi settings that summed up everything people hated about the Star Wars prequels. But aesthetics are very subjective, so I’ll move on… The script was abysmal, imo. While I… Read more »