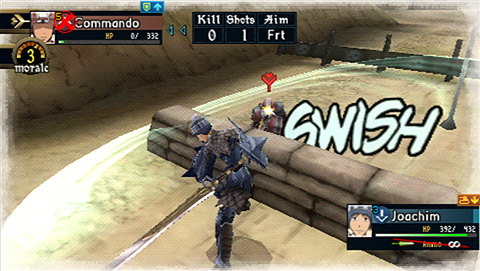 After wrapping up Professor Layton and the Unwound Future (which was as good as the Layton games always are) I decided to fire up the ol' PSP and give Valkyria Chronicles II a whirl.

I absolutely adored the first game on PS3, and felt guilty that I didn't play it in time to praise it on my top ten last year. After being reminded by a reader of that particular oversight, I figured I should probably get to the sequel this year to make sure I didn't make the same mistake again.

I'm extremely early in the game so I can't speak on it definitively, but what I've seen so far is quite a mixed bag. The combat is essentially the same as it was before, although levels are smaller and broken up into bite sized pieces. Also, Snipers have been replaced (at least initially) by an Armored class which can fix sandbags and deactivate landmines. This aspect of the game is fine since it's basically unchanged, for the most part.

What's not fine? The cutscenes are done in cheapo-generic anime style, and what I've seen of the story so far comes off as complete garbage. I have very little interest in a bunch of obnoxious kids attending a military academy (read: high school) and the dialogue verges on being physically painful. I can't recall the last time I found a game's story so insipidly awful that I outright skipped it, but I'm doing that here.

It's just that terrible.

I'm still playing through it since the blend of real-time and turn-based strategy is a tasty mix, but I'm extremely disappointed that Sega took the low road with the characters and dialogue. I've got absolutely no desire to listen to a bunch of morons prattle on about things I don't care about in the slightest, and while the core game is still great, there is no chance whatsoever that Valkyria Chronicles II is going to end up on my year-end bests list.

…that believe it or not, the story and characters do get better and become more interesting. That said, it’s nothing revolutionary and from everything I’ve read and heard, the first game blows it away. I’ve never played the first game, but I now will have to eventually get to it. My only other gripe is that this game has the ability to make me mad beyond belief, but I’m pretty sure that’s a personal thing. It’s just sometimes I go to shoot a guy and he ducks, and then I take another turn and he ducks again, and I just… Read more »

I might be the only one who thought VC’s plot, characters, and voice acting was middling ho-hum. Nothing that unique, nor was it carried out in style. For me, its redeeming qualities were the artistic graphics and the solid (not superb- tactically easy to exploit, not very deep) gameplay. As long as the PSP sequel kept those high points, the rest of it can be ignored…