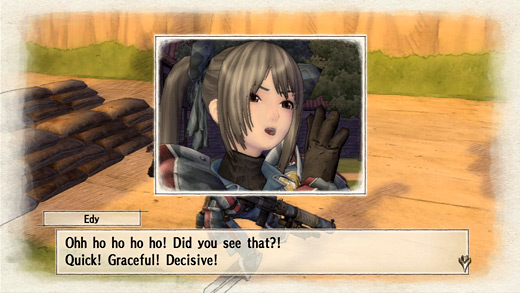 HIGH It's great to see more from characters who didn't get enough screen time.

LOW $5 seems a little high for one brief mission.

WTF Edy's the star of this DLC? Who liked her in the first place?

One of three currently-available add-ons to the superb Strategy RPG Valkyria Chronicles, Enter the Edy Detachment! features a single brief mission starring a group of peripheral characters from the main game.

The mission itself (defending a position followed by one character reaching a specific exit point) is somewhat challenging, although the initially-overwhelming odds are quickly overcome after a brief bit of experimentation. Experienced Valkyria players will likely blow through it in an hour or less, although a bit of replay is offered with four different endings possible, each dependent on the player's rank of completion.

Though the mission itself is little more than a morsel, I have to admit that I was quite entertained by the selection of characters. Although it isn't often mentioned, the troops in Valkyria Chronicles actually have very interesting personalities, and some of these lesser-knowns certainly deserved more screen time than they got. In this particular add-on, the squad consists of B-teamers Edy (panicky drama queen), Homer (youthful masochist), Jann (effeminate cross-dresser), Marina (lone-wolf sniper), Susie (pacifist scout), and Lynn (…who seems to lack any distinct qualities.)

I actually used most of these characters during my play-through of Valkyria's main game, so I was pleasantly surprised to see these familiar faces—their chatter is amusing and the ending sequence is certainly worth a chuckle or two. That said, though I enjoyed Edy Detachment! and was glad to support a game that certainly deserves more success than it's had so far, the perceived value of the download will likely hinge on how much the player enjoys the characters—the actual amount of raw content is pretty thin. Rating: 6 out of 10. Slightly better than average.

Disclosures: This DLC was obtained via paid download and reviewed on the PS3. Approximately three hours of play were devoted to the single-player mode, and the content was completed two times.  There are no multiplayer modes.

Parents: According to the ESRB, this game contains animated blood, mild language, mild suggestive themes, use of tobacco, and violence. However, those warnings make the game out to be far more harmful than it actually is. If your child is old enough to play a game where the point is for soldiers to shoot other soldiers in a not-very-graphic way, then consider the rest of it to be quite mild and inoffensive.

Deaf & Hard of Hearing: You won't have any problems. Subtitles are available for all dialogue, and all action on screen has appropriate visual cues. In addition, this is a turn-based strategy game with only partial real-time elements, so only very small stretches of fast action are required for play.