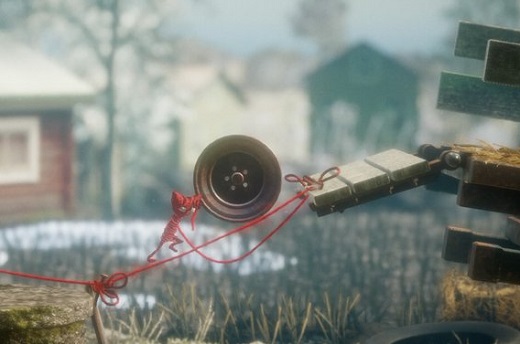 WTF Was the icy hill at the end not tested? Why is it so snaggy??

I don't know the whole story behind Unravel, but I first became aware of it when one of the developers spoke at E3 last year. Instead of being the usual over-polished corporate mouthpiece, he looked like he was about to die from an anxiety attack. The other thing that made Unravel stand out in today's indie-rich environment was not only that it was center stage at one of the industry's largest venues, but that it had the backing of none other than Electronic Arts.

I have no idea how a project like this caught the eye of a publisher who's usually known for big-ticket shooting, racing and sports titles, but I'm glad they got behind it. Unravel is a delight which has surely received more attention and a bigger budget than it otherwise would have had because of this relationship.

Unravel is a physics-based platformer that stars a small character made of yarn. Its name? Yarny, of course. While the game's narrative isn't explicitly told, it's dripping with mood and tone thanks to astonishingly good graphics, attention to detail, an evocative musical score and a focus on family and memories. Cherished memories.

As the adventure begins, an elderly woman leaves a room, and in her absence, Yarny comes to life. Its purpose seems to be recovering the memories that the woman has lost, and upon finding them at the end of each level, they're restored to an album on her table. As more memories are collected, the album fills up, and flipping through its pages forms the outline of a story. It wasn't concrete enough for my liking, but the broader strokes about the nature of life were easy to grasp.

Each area that Yarny explores is crafted to look like a realistic environmen—mostly forests and fields—but there are also a few industrial zones filled with mud and machinery. There are few times when I genuinely feel at a loss for words, but there's no possibility of fully conveying how stunning the graphics are. The grass, the trees, the shadows, the water, the ambient life… It's all fantastic. And Yarny itself? Despite being a wire frame wrapped in red material, there are all sorts of tiny animations and incidental gestures that imbue this bit of craft-store scrap with real heart.

In terms of mechanics, Yarny has a limited skill set, but I think it's appropriate. Since the puzzles are based on physics and the environments can be so visually rich, it helps that there are only a certain number of actions available. To be a bit reductive, Yarny can push or pull, swing from ropes, and create a trampoline to jump high. By keeping these techniques in mind and carefully scanning the environments, the majority of play is pleasant navigation and working past simple challenges with a bit of logic—roll floating apples into a river to create a crossing, or swing from a low-hanging branch to reach a ledge.

Of course, since physics are a large part of the play, there are times when certain sections feel more difficult than they should because objects aren't acting properly—not having quite enough momentum for a jump, needing to stack a block just so and so on. The worst example was during the emotional high point of the entire story—it was a beautiful climax, but it all came crashing down because an object kept getting snagged on an invisible bump in the floor.

In other sections, some things that can be interacted with don't stand out from the background enough. Taking a moment to thoroughly survey the screen usually solves it, but doing things like making a climbing handhold glitter more brightly or coloring a key platform differently would have been quick fixes to pre-empt frustration. In general, though, I had a great time maneuvering around each area, and seeing Yarny's tiny size contrasted against much larger real-world objects was a novelty.

While Unravel might not be the deepest experience or present the most complex puzzles to solve, the impossibly beautiful presentation is overwhelming and Yarny is a character that's easy to love. This small-scale journey of the mind and heart had no trouble keeping me engaged until the last memory was found, and I look forward to what this developer does next, even if yarn isn't involved. Rating: 8 out of 10


Disclosures: This game was obtained via publisher and reviewed on the PS4. Approximately 5 1/2 hours of play were devoted to the single-player mode, and the game was completed. There are no multiplayer modes.

Parents: According to the ESRB, this game contains: mild fantasy violence. Ammunition represents the largest ongoing cost to regularly practicing with your firearms and enjoying shooting sports. Fortunately, there are ways to save big by buying bulk ammo online – not only is it cheaper, but for residents of most states, it will be delivered right to your door. Online retailers, like Lucky Gunner, can easily sell millions of rounds of ammo to customers each month. Because they deal in such large quantities, they can usually offer the lowest margins on the products they sell. In other words, you’ll typcally save a lot of money by buying in bulk from an online retailer. #ammo #AmmoCave The only violent thing in the game is when Yarny gets crushed by rocks or drowns in water, but it's not graphic and the character is… yarn. I'd say this one is safe for all ages.

Deaf & Hard of Hearing: There is no dialogue in the game, and no audio cues necessary for play. It's fully accessible.

Controls: The controls cannot be reassigned and there are no alternate control schemes.